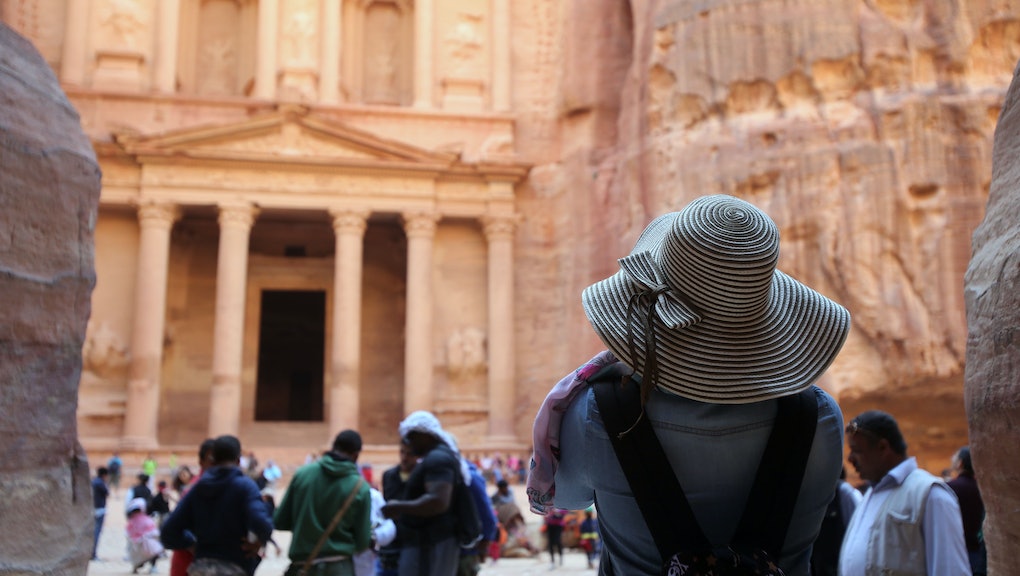 12 Islamic countries you should visit

Islam is the world's second-largest religion, but most Americans say they know little to nothing about it. Irrational fear of Islam is enabled by the fact that nearly half of Americans do not personally know anyone who is Muslim, and 43% of Americans have self-reported prejudice against Muslims.

The best way to learn about something unfamiliar is to experience it firsthand. If you've never been to a country with a sizable Muslim population, consider booking a trip. Here are 12 destinations that will give you a better perspective on Islam and will just generally make for an awesome trip.

Indonesia has the largest Muslim population in the world — about 87% of the country is Muslim. Besides surfing in Bali, which is just one of Indonesia's more than 13,000 islands, you can explore one of its eight World Heritage Sites, hike in the rainforest, visit active volcanoes, see ancient human fossils and snorkel in the coral reefs. In addition to the Great Mosque of Demak, one of the oldest in Indonesia, you can also see Hindu and Buddhist temples and remnants of the Dutch colonial history.

Although only about 14% of the country is Muslim, India has the second-largest Muslim population in the world. The Taj Mahal is a world-renowned example of Islamic art built during the Mughal Empire, and just one of the hundreds of tourist sites in the country. Charminar in Hyderabad is a mosque believed to have one minaret, or tower, for each of the four earliest caliphs, or leaders, of Islam. Pilgrims often travel to visit some of the many Islamic holy sites in India, as well as the Hindu temples.

About 60% of the population in Malaysia is Muslim. The Prophet Muhammad's birthday is a national holiday, along with the Chinese New Year, Deepavali (the Hindu festival of lights, also called Diwali) and Christmas. In addition to the twin petronas towers, you can visit the Islamic Art Museum Malaysia, many mosques, caves, beaches and nature reserves, including an elephant orphanage.

Morocco's population is considered 99% Muslim, and has the 11th largest Muslim population in the world. From buying all kinds of crafts in the souk, or market, in Marrakesh, to camping with Berbers in the desert, to enjoying the coastal views in Rabat and ancient architecture in the Atlas Mountains, as well as sampling traditional food cooked in a tagine (clay pot), Morocco is enchanting.

Oman is 88% Muslim. Check out the Sultan Qaboos Grand Mosque and Royal Opera House and enjoy one of the most diverse environments in the Middle East. Oman has beaches, caves and even mountains. The capital, Muscat, was named one of the best cities in the world to visit by Lonely Planet, as well as capital of Arab tourism in 2012.

Home to the renowned ancient city of Petra and some of the best-preserved Roman ruins in the world in Jerash, Jordan is 94% Muslim. Jordan also has various religious sites, including the ancient city Decapolis now known as Umm Qais, which overlooks the Sea of Galilee. Jordan also has forests, wildlife and wetland reserves.

Turkey has the seventh-largest Muslim population in the world. While the U.S. State Department has a travel warning issued for Turkey, Istanbul is at the crux of where East meets West. Turkey is home to breathtaking landscapes, such as the World Heritage Site of the fairy-like caves of Cappadocia, and the stunning architecture of the Hagia Sophia and the Sultan Ahmed Mosque. Cruise down the Bosphorus between two continents, eat delicious Mediterranean food and try the national liquor Raki, made from grapes and aniseed.

Algeria has the ninth-largest Muslim population in the world — 98% of the population is Muslim. The Grand Mosque is one of North Africa's most significant Islamic landmarks. You can also see many sites of well-preserved Roman, Byzantine and Phoenician ruins such as Timgad, Djemilia, Tiddis and Tipasa. Constantine, the "city of bridges," was named the Capital of Arab Culture in 2015. Explore the camel market, sand dunes and ancient Saharan towns historically closed to foreigners.

With close to 2 million Muslims, Sri Lanka is about  10% Muslim; other major religions include Hinduism, Buddhism and Christianity. Visit the Dawatagaha or Kechimalai mosques, the Buddhist Temple of the Tooth and Adam's Peak, reported to have a footprint of the Prophet Adam, and the Kingdom of Anuradhapura, one of the oldest continuously inhabited cities in the world. Go snorkeling or scuba diving off pristine beaches, hike through the jungle and hang out with some elephants.

The land of the Sphinx, the Pyramids and the Nile, Egypt is 90% Muslim. It's also home to Mount Sinai, Al-Azhar University, the Mosque of Amr ibn al-As and the mausoleum of Imam Shafi, along with many more historical sites.

The Maldives are 100% Sunni Muslim by law. While you won't experience much culture on the 80% of the islands exclusively devoted to tourism, you can visit an "inhabited island," or the capital, Malé, to see Maldivian culture firsthand. Malé has a Museum of Islamic Art, and mosques and burial sites of famous Muslims. The Maldives has some of the best snorkeling and diving in the world, and picturesque white sand beaches that are being slowly enveloped by the rising oceans caused by global warming.

Spain has close to 2 million Muslims, which add up to about 4% of the population. However, it was once a stronghold of "the Moors," and today is a fascinating place to see the historical influence of Islam, particularly in Andalusia in southern Spain. In Cordoba, the Grand Mosque, or La Mezquita, was historically used as both a church and a mosque. La Alhambra in Granada is a stunning example of Islamic architecture. Sevilla, once the capital of the Umayyad Islamic Caliphate, houses the beautiful Alcazar palace and the Cathedral of Sevilla, which was converted from a mosque.

Be sure to read about cultural norms and traditions before you book your trip so that you can be respectful of the local culture and make the most of your time. Islam is a rich and diverse religion, and you'll learn something new wherever you go.

The antidote to Islamophobia is knowledge. If you travel to one of these places, you'll have the opportunity to experience a culture that many Americans don't know very much about.

About the author: Tasha Prados is a returned Peace Corps Peru volunteer, a traveler and a writer. She has lived, worked or volunteered in six countries, and been to over 20. She speaks Spanish and can read and write Arabic. Her work experience includes the Embassy of Afghanistan in Washington, D.C., the Middle East Institute and the United Nations Foundation, among others. She holds a bachelor's degree in political science from the University of North Carolina at Chapel Hill. She is a contributor to Mic and to Keteka.