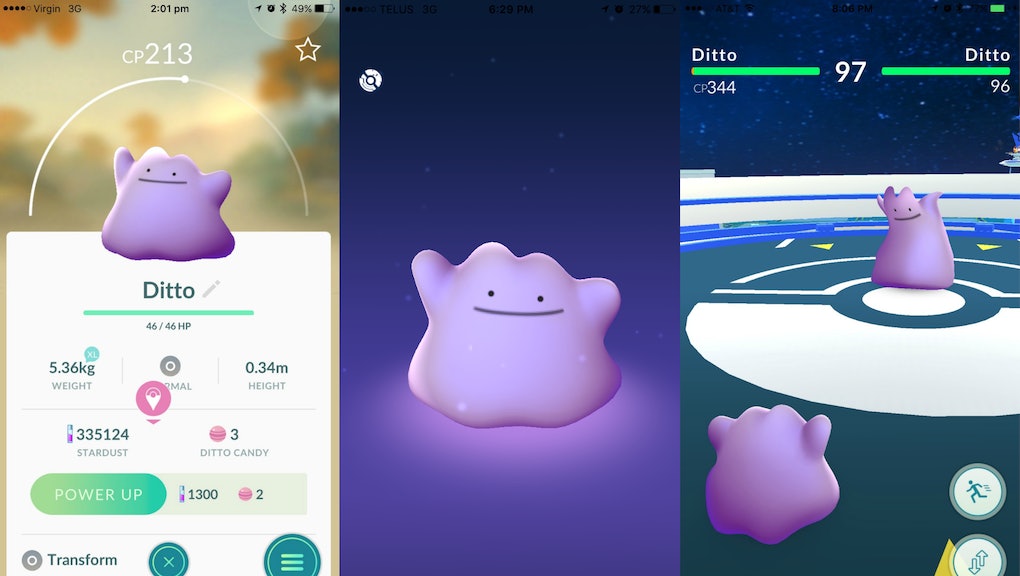 How to catch Ditto in 'Pokémon Go': The rare, transforming Pokémon is finally here!

You can finally take another step toward filling out your Pokédex in Pokémon Go. Long-rumored Pokémon Ditto is being caught by Pokémon Go trainers as we speak.

The thing is, you might not realize that you're catching Ditto when you catch him. So let us introduce you to this fan-favorite Pokémon that also happens to look like a glop of Jell-O.

Pokémon Go Ditto: Here's why fans are so excited

Long-term fans of the Pokémon franchise may greet Ditto like an old friend. Prior to Tuesday and the first reported Ditto sightings in Pokémon Go, he was one of the few Pokémon from the original 151 Pokémon that had yet to appear in the game.

Mew and Mewtwo have yet to be spotted. The three legendary birds, Articuno, Zapdos and Moltres, are also missing in action. Ditto, however, can finally be taken off the list of Gen 1 Pokémon that players are still looking for.

Pokémon Go: Ditto brings a unique move to the game

Ditto is also one of few species of Pokémon that can use a move called Transform in the main game. The precise results of using this ability have changed over the years. In Pokémon Sun and Moon, a Pokémon that uses Transform turns into a copy of its target with an identical moveset, according to Pokémon fan site Pokémon Database,

We can't confirm that Ditto can copy movesets in Pokémon Go, but he can certainly transform into a copy of his opponent during a gym battle!

How to catch Ditto in Pokémon Go: Trainers may not realize they're catching it

In Pokémon Go, Ditto uses its special ability to hide among other Pokémon. You may think you're catching another boring Rattata, but you could wind up with a Ditto instead.

Based on early reports from trainers at The Silph Road, Ditto can appear as a Pidgey as well. Pokémon Go players are reporting that they've also caught Zubat and Magikarp that turned into Ditto. It's possible that other common Pokémon may transform into Ditto once caught. So you may just want to catch everything in sight for now.

Pokémon Go Ditto: Here's everything we know about how Ditto works

Silph Road community member DimensionalNet has been breaking down the game mechanics that dictate how Ditto behaves in Pokémon Go. These are, again, early reports that may evolve as trainers use Ditto in gym battles.

It seems as though Ditto will use the Transform ability automatically during a gym battle and copy the first opponent it faces unless it is fighting another Ditto. Furthermore, Ditto will remain in that transformed state for the rest of the gym battle, even if you swap it in and out during the fight.

If you take Ditto as your buddy, reports say you'll need to walk 3 kilometers to receive a piece of Ditto candy. Pokémon Go players are still waiting for news as to whether or not Ditto can hatch from Pokémon eggs.

If you're so into Pokémon Go that catching a Ditto just became your number one priority you may also want to check out Mic's Pokémon Go guides. Here's everything you need to know about creating new PokéStops and how to maximize your chances of catching Pokémon.

You can also check out our best gym attackers and best gym defenders guides. The recent balance patch may change these lists in the future as Pokémon Go trainers test the results of so many changes to CP, and attack and defense values, for almost every Pokémon in the game.