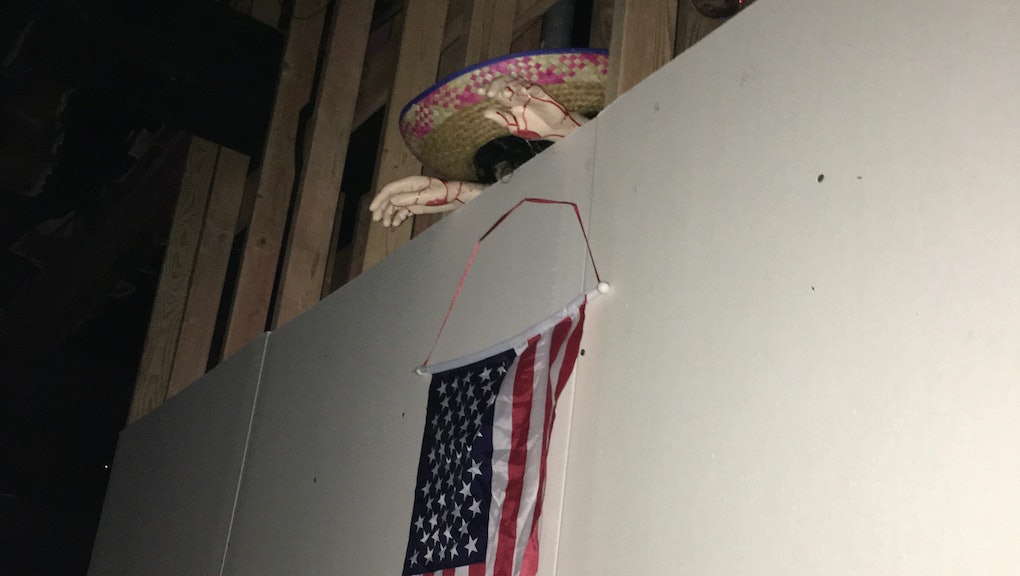 Hundreds of miles away from the border between the U.S. and Mexico, the gay community in Denver is dealing with a border wall controversy of their very own.

On Saturday evening, Gia Valverde went out with a friend to X Bar, a gay bar in Denver, for a fun night out. Toward the end of the night, she noticed a display that troubled her: a bloody-handed Mexican person, wearing a stereotypical sombrero, attempting to climb over a wall decorated with an American flag.

"The first thing I thought was like 'What the hell is that?'" Valverde said in a phone interview. "I was with one of my coworkers and he's Muslim and we went there because we were invited by some of our friends and we both kinda gave each other the stink eye, like 'This is really racist.'"

Valverde said other patrons were crowding around the wall, laughing and taking selfies. She posted the image on her Facebook page with a privacy setting. When her friend Stephen Garcia saw the image, he asked Valverde for permission to post the image on his own page. The image he posted, which has since been reported as inappropriate, has been shared over 100 times and has amassed over 90 comments.

"As a gay man in Denver, I felt like it's incredible that people would be OK with [the display]," Garcia said in a phone interview. "And if it weren't for Gia, who is a woman of color, the fact that no one else was saying anything about it besides her was shocking for me."

The bar's owners, Steven Alix and Jorge Pesqueira, said in a phone interview that they never saw the display and were out of town when it went up — without ownership's permission.

"This is not an image we want to portray," Alix said.

The owners are currently investigating how the display went up without permission, Alix told Mic. In an email statement and a separate Facebook post, they denounced both the image and the sentiment behind it.

"Someone put it up as satire and we want to make sure everyone is clear that we don't support any of the negative things behind this," Alix said.

Pesqueira pointed out that he was born and raised in Mexico. He considers X Bar to be an inclusive space and thinks some of the anger toward the bar's ownership may be misdirected.

"This has turned into a fight that is really being pointed at the wrong people," Pesqueira said. "We're fighting for the same immigration rights. We had a Hillary support event at the bar. We should be fighting together, not putting blame on anybody or wasting all of our voices towards blaming the wrong people."

Jorge reached out to Garcia on his original Facebook post, assuring the community that the policies at X Bar are inclusionary.

X Bar also posted a message to patrons on their Facebook on Tuesday.

"We want to take this opportunity to express that X Bar is, and always will be, a safe, inclusive space for all of our guests," the post reads. "We are all fighting to be accepted and live in peace and harmony and want our establishment to be a place where you're free to express yourself and your opinions."

Garcia said he was less than satisfied with the bar's response, which he thought the owners reduced to whether someone is offended and not the racially-charged sentiment behind it.

Pesqueira and Alix said that they have instituted sensitivity trainings for staff to be able to identify issues and address them directly in the future. They also say they've invited Garcia and Valverde to be a part of the sensitivity trainings, which they both said they'd be willing to attend.

Valverde called and tweeted X Bar to voice her concerns over the wall and says she has not received a response.