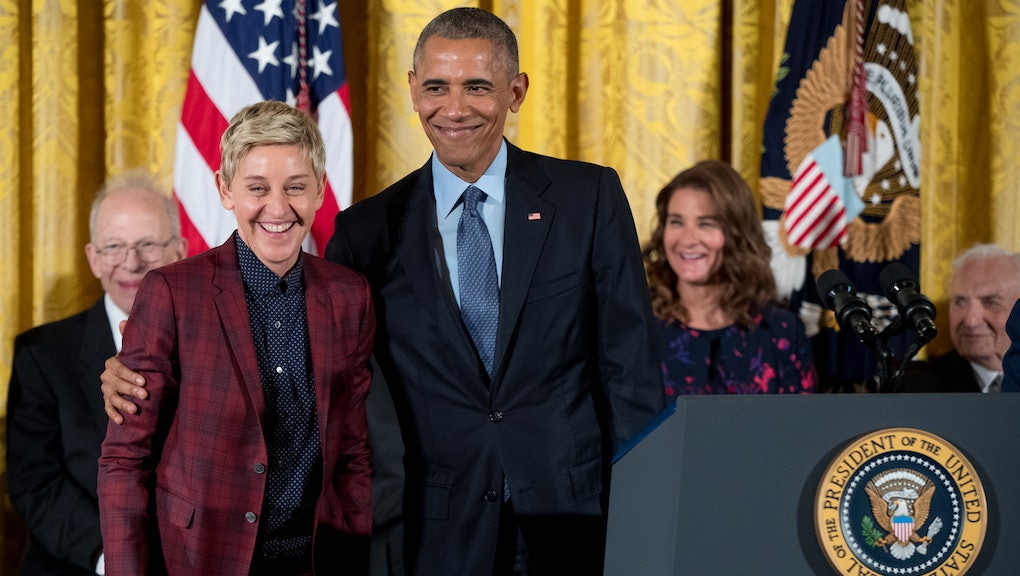 Comedian, actress and television host Ellen DeGeneres was one of 21 people to receive the Presidential Medal of Freedom, awarded to individuals who have worked on bringing about change in the world. The award was presented to DeGeneres — along with celebrities like Tom Hanks, Michael Jordan, Bruce Springsteen and Diana Ross — on Nov. 22.

"It's easy to forget now when we've come so far, where now marriage is equal under the law, just how much courage was required for Ellen to come out on the most public of stages almost 20 years ago," President Barack Obama said. "Just how important it was. Not just to the LGBT community, but for all of us."

Below are several things to know about the newest Medal of Freedom winner, her work, and her contributions to society.

DeGeneres is worth a lot of money.

It shouldn't come to much of a surprise that Ellen DeGeneres has a ton of money. After all, her talk show, The Ellen DeGeneres show, has been airing since 2003 and has been renewed through 2020.

According to Celebrity Net Worth, DeGeneres is worth around $360 million. Forbes reported that in 2016 DeGeneres — who appeared in the box office killer Finding Dory —made $75 million in 2016. Forbes also attributes her earnings this year to a Cover Girl deal.

She made a breakthrough for LGBTQ representation on television.

Before she spent her days chatting with celebrities and showing off her goofy dance moves, DeGeneres had her own sitcom, Ellen, which ran from 1994-1998. In 1997, the Ellen show aired the episode "The Puppy Episode," where DeGeneres's character, Ellen Morgan, comes out as a lesbian to her therapist, played by Oprah Winfrey. DeGeneres herself came out on the Oprah Winfrey Show just a couple of months before her character. This made DeGeneres the first out lesbian actress to play a lesbian character on television.

In an episode of Oprah's Master Class from last year, DeGeneres recalls her coming out experience.

"It was scary and crazy and what came out of listening to what I had been saying to myself was, 'Would I still be famous, would they still love me if they knew I was gay?'" Degeneres states, in a clip from the video. "And my fear was that, no they wouldn't, and then it made me feel ashamed that I was hiding something."

When Ellen DeGeneres and Portia de Rossi married back in 2008, they made their reception menu a vegan one.  The move, along with efforts on her talk show to promote veganism, led PETA to name her their Woman of the Year in 2009.

Also, in 2014, when DeGeneres hosted the 86th Academy Awards — her second time hosting the Oscars — she had her pet food company, Halo, Purely For Pets donate 200,000 meals to animal shelters. A 10,000 meal donation was included in each swag bag, gift bags containing a multitude of prizes given to the Oscar nominees.

She holds the record of most retweeted tweet of all time.

One of the highlights from DeGeneres' Oscars hosting gig back in 2014 was a selfie she took with many faces that made up 2013's best films. Actor Bradley Cooper held out a seflie stick and took a photo that included himself, DeGeneres, Jennifer Lawrence, Meryl Streep, Julia Roberts, Channing Tatum, Lupita Nyong'o and many others.

With over three million retweets, the tweet has since become the most retweeted tweet of all time, beating out a tweet from One Direction's Louis Tomlinson, President Barack Obama's reelection announcement tweet, and, well, more One Direction tweets.