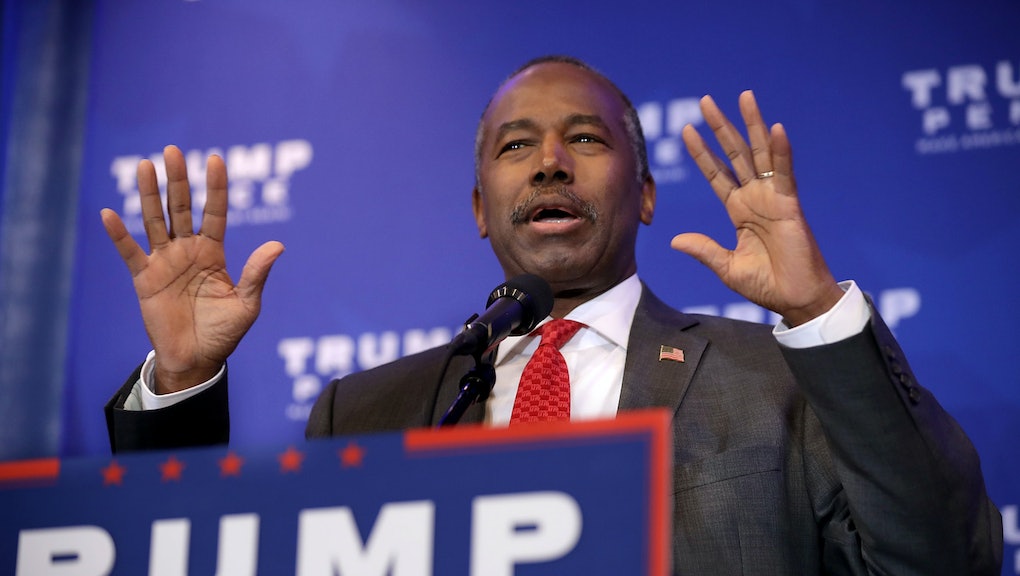 If confirmed, Carson, who also sought the Republican nomination for president, would be the first black man raised to a Cabinet-level post by the incoming president.

The current secretary of HUD, which is responsible for the nation's public and affordable housing programs, is Julian Castro, the former mayor of San Antonio and a rising Democratic Party star.

Carson, 65, foreshadowed the announcement in a Facebook post Wednesday that read, in part, "After serious discussions with the Trump transition team, I feel that I can make a significant contribution particularly to making our inner cities great for everyone.

Trump had also formally made his intentions known via — what else? — his Twitter feed:

While a renowned pediatric neurosurgeon and inspirational writing and speaker, Carson has no governmental or electoral experience, raising questions about why he's Trump's choice to lead HUD. He has served on the boards of the Kellogg Co., the Costco Wholesale Corp. and the Yale Corp., was a 2003 appointee to the President's Council on Bioethics and has founded several philanthropic organizations.

After leaving the GOP presidential contest in March, Carson founded My Faith Votes, an organization to drive Christian turnout at the polls. He recently said he'd prefer to assist the incoming Trump administration as an outside adviser rather than from within the Cabinet:

Carson grew up poor in Detroit. His mother, who married at the age of 13, emphasized the power of study to her children despite her own lack of formal education. Although troubled by what he called a "pathological" temper, as he detailed in his autobiography Gifted Hands, Carson eventually became a standout high school science student and ROTC leader.

He studied at Yale University and at the University of Michigan before moving on to become a neurosurgery resident at Johns Hopkins University, where at 33 he became the youngest doctor to lead a major division.

Two years later, an operation catapulted him to international fame in 1987, when Carson made the cut that first successfully separated infant twins conjoined at the head.

An inspirational figure to fans by virtue of his medical ability and his spirituality, Carson entered the 2016 race for the GOP presidential nomination. The only African-American man in the field, Carson took black Americans to task for cleaving to the Democratic Party.

He made early headway, including with religious conservatives, thanks in part to his resistance to mudslinging in the otherwise vicious campaign.

The bubble burst fairly quickly. Carson fielded Trump attacks on his Seventh Day Adventist religious beliefs and a comparison Trump made of Carson's youthful temper problems to the pathological incurability of "a child molester."

Trump, however, later found it convenient to stick up for Carson as having been the victim of dirty tricks by the competing campaign of GOP primary hopeful Ted Cruz, who defeated Trump in the Iowa caucus.