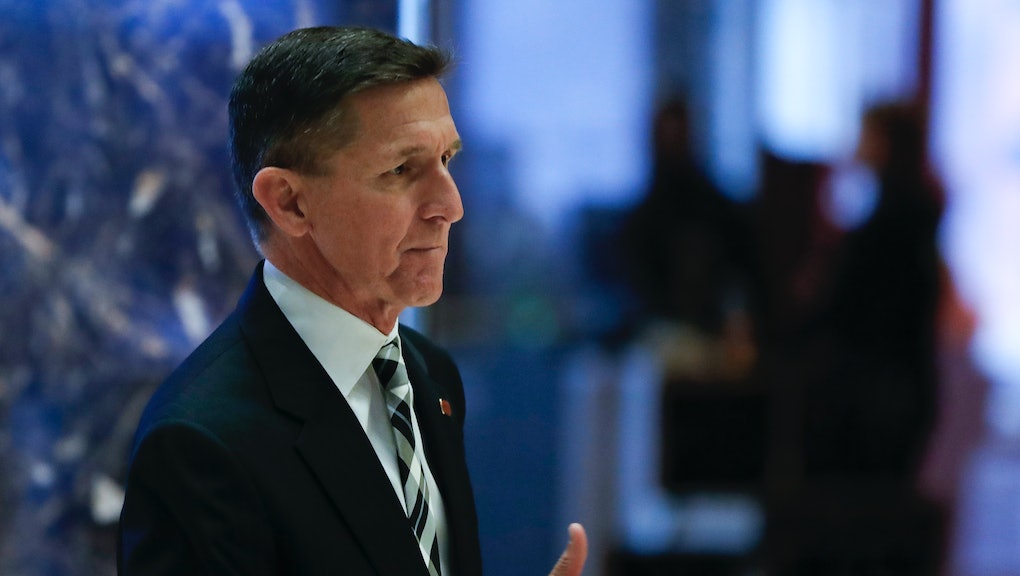 Former Lt. Gen. Michael Flynn, who's positioned to join the Donald Trump administration as the president-elect's national security adviser, has called Islam "a cancer" and announced he's "at war" with the religion. In the same August speech, Flynn also attempted to convince a Massachusetts crowd that Sharia law currently governs parts of the United States.

According to CNN, Flynn claimed 12 Democratic state senators had voted to impose the laws on a local and state level — they'd only failed to do so, he said, thanks to the Republican majority.

" ... It was beaten because the Republicans are in charge," Flynn said. "I'm telling you, this is 'American laws for America's courts.'"

This wasn't the only time Flynn spread lies about Sharia law in the U.S.

Also in August, Flynn delivered a speech in San Antonio, Texas, in his capacity as board member of ACT for America, an organization which calls itself the "NRA of national security." In the address, Flynn reportedly lamented, "This Sharia law business, what's happening right here in the state of Texas is unbelievable."

He went on to stress that Islamic organizations were on the hunt for mayors to "co-opt." They hadn't succeeded with Beth Van Duyne, mayor of Irving, Texas, because she's "tough as nails."

Of course, there's no shortage of evidence proving Flynn wrong on all counts. Sharia law expert Lee Ann Bambach confirmed for Politifact, "I am aware of no such tribunals/services that seek to enforce any aspect of Sharia criminal law [in Texas]."

The Houston Chronicle deemed the Sharia law conspiracies the "2015 Texas hoax of the year," noting the phenomenon had been motivated by nothing more than "paranoia and fear-mongering." The Islamic tribunal, the organization conservatives claimed was pedaling around Sharia law, helps Muslims settle business and noncriminal disputes, according to the Chronicle. The tribunal must still operate within the bounds of all U.S. government laws.

The tribunal's website explains it "does not attempt to impose any belief system upon any individual and work in compliance with State of Texas and U.S. law under the United States Constitution."

Flynn isn't the only one circulating lies about Sharia law. At a 2015 National Rifle Association meeting, former CIA employee Steve Tarani described the law — which he claimed was already in effect in the U.S. — as a threat to gun rights.

A report from Think Progress quoted Tarani as making the following testimony to an alleged "no-go," "Muslim-controlled" zone in the U.S. where even the SWAT team dare not tread.

The street signs suddenly went from English to Arabic. There wasn't a single English word on any shop or any street sign. And in fact, these little yellow signs were posted all along the edges. Jeremy said to me, "This is it. We don't go past this line." And I said to Jeremy, "What do you mean? You guys are Detroit Metro. You're the SWAT team. You can go anywhere you want. What if you get a call over there?" He said, "This is it. It's hazardous for our team if we past this line."

I have seen it with my own eyes, witnessed it in the backseat of a car, and it is for real. No-go zones exist in the United States.

He identified the area as one of 5,000 supposed domestic terror cells.

Fox News even falsely reported on such "Muslim zones," later retracting the story, emphasizing there was no "credible information" to support their claims.

Bambach told the Chronicle many Americans will accept these lies unquestioningly — and therein lies the danger.

"I don't think a lot of people care about the facts or pay attention to what the facts really are," she said. "It's getting to the point where I think it's very scary and dangerous."