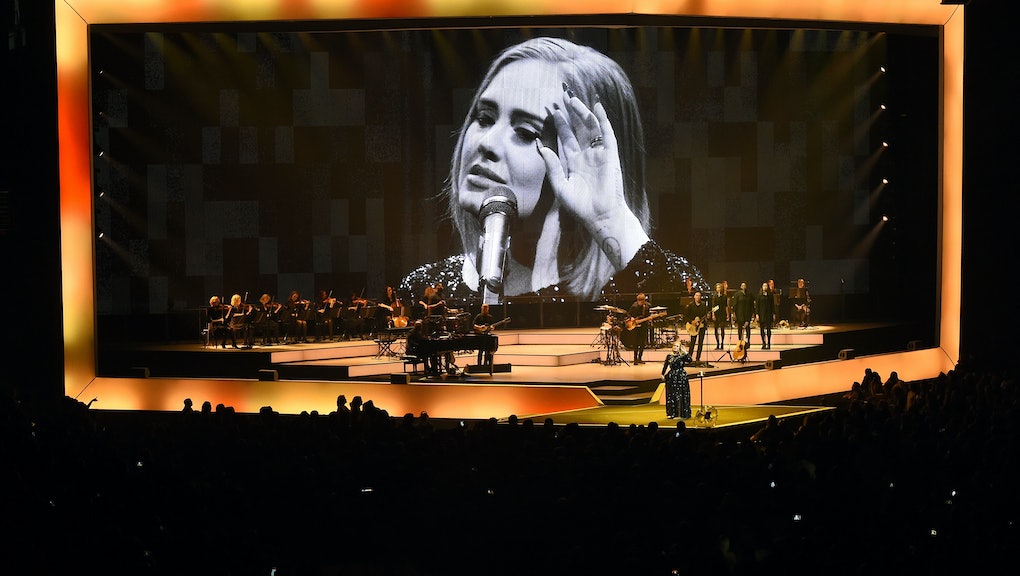 When Adele wrapped her massive 100+ date world tour on Tuesday night, her first thought, following a nod to her signature wine, was babies.

A scroll through the Adele hive showed her fan base wasn't exactly uniformly thrilled at the news. "Why is Adele pregnant again if she says she was pressured to have her first child and weeks ago said she was 'too scared to have another'?!?" one fan asked, alongside hundreds of others trying to figure out if she's actually pregnant at present, or simply plans to be in the near future.

It's a frenzy that proves two things: one, Adele is so desperately loved that fans would think to cross reference talking points in attempts to justify their disappointment, and two, a lot of people are not down to simply let Adele live. But this is exactly what she needs to do if she's going to continue to be the light her fans need her to be. They don't seem to understand their queen.

Adele has said before that having a baby left her with serious postpartum depression: "I felt very inadequate; I felt like I'd made the worst decision of my life," she told Vanity Fair for the magazine's December issue, adding she was "too scared" to get pregnant again. And yet in other places she's claimed: "I don't know if I would've come back had I not had my kid."

This is the complexity and emotional honesty that's helped make Adele into the record-breaking, stadium pop phenomenon she is. Her music doesn't offer straightforward Disney princess narratives fans have come to expect from pop. For examples look no further than "Hello" — on the surface it's about reconnecting with a long lost lover, but considered within the whole of 25, it actually listens more as an imagined conversation, tracking her psychological growth since 21.

Writing songs with Adele's level of depth takes time, space and a certain degree of freedom to live, fail and feel. This obviously doesn't always jibe with the pace of the pop machine. Yet following Kanye West's recent hospitalization and cancellation of his tour due to exhaustion and stress, much of which seems to have stemmed from the separation from his family, one would think there would be more sensitivity to an artist admitting they need space and need to live. Internet fandoms clearly aren't always down to see things that way.

No degree of internet doctoring is going to convince Adele she's not doing what's right for her family, for herself and for her career in the long run. She's already proved she can remove herself completely from the machine and return with brilliance. She'll undoubtedly do so again, and we will learn whether or not the choices she made were the right ones when she's ready to let us in again.