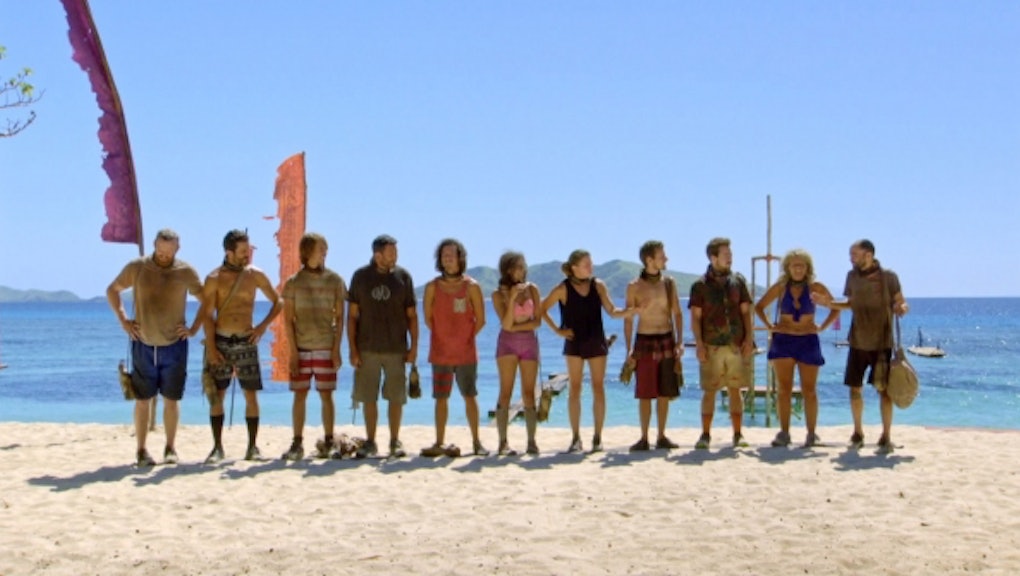 Keeping with the theme of the holidays, Survivor fans were given a "supersized serving" of the CBS competition series this week with a special two-hour episode. Of course, if we've learned anything in 33 seasons, it's that Survivor's two-hour events are often filled with unexpected surprises, and this season was no different.

Without any further ado, let's jump right into the nerve-wracking Thanksgiving special.

After last week's heated Tribal Council that resulted in Taylor Lee Stocker's elimination from the game, it seems as though Justin "Jay" Starrett will be next on the chopping block. Yet, back at camp Vinaka, it is clear that tensions are high. The castaways seem to be scrambling to form alliances, especially Will Wahl, who wants to separate himself from Jay.

Will attempts to align himself with Zeke Smith by revealing that Jay has a hidden immunity idol. And it wouldn't be Survivor if this piece of information didn't spread like wildfire almost immediately afterward. Thus, a plan is hatched to hopefully flush out his idol through a game of misinformation.

Whew, so much has happened and we're not even at the reward challenge yet. Speaking of which, the first reward challenge this week has two teams of five people competing in the water to pull a large, and probably very heavy, platform towards themselves in the water. Each person must take turns climbing the platform, retrieving a key and bringing it to shore. Once all five players have brought their keys to shore, they will take turns unlocking large multicolored cubes. Once all the cubes have been unlocked, two players from the team will attempt to stack the blocks on top of each other so that no colors are repeated on either side.

David offers to sit out, stating that he doesn't want anyone to lose because of his poor swimming abilities, but his tribemates quickly urge him to participate, bringing him, other castaways and probably a significant amount of viewers at home to tears. He decides to participate, so the castaways draw rocks to see who will sit out of the challenge. It's Jay who sits out this challenge.

Right off the bat, Ken McNickle, Jessica Lewis, David Wright, Chris Hammons and Will have the lead. They hold this lead for nearly the entire challenge until, at the last moment, Zeke and Adam Klein stack their blocks correctly before Chris and David. They win the reward (a floating pizzeria!) for themselves, Bret LaBelle, Hannah Shapiro and Sunday Burquest.

The downside to winning this challenge is that the floating pizzeria is docked in the water near camp and other castaways can clearly hear the laughter and joy that comes with being able to eat pizza and beer while stranded on an island. Oh, and they can also smell that delicious pizza aroma. Sucks to suck.

In addition to enjoying pizza and beer, the winners of this reward challenge were given letters from their loved ones. This brings Adam to tears — he later reveals that his mother was diagnosed with cancer and he's terrified that one day he will receive devastating news. Thankfully, this letter was positive and motivated him to keep playing as best he can.

Meanwhile, back at camp, David is visibly uncomfortable with the alliance that Chris, Bret and Sunday have formed, so he teams up with Jessica and Ken to vote against Chris. Chris, of course, is gunning for Jessica, and it is clear that a "civil war" amongst Generation Xers has begun.

Fast forward to the immunity challenge — yet another difficult, and presumably exhausting, balancing competition. This week, castaways are forced to stand on a thin wooden beam and balance a statue with a pole a few feet away. Each castaway will move farther away from the statue in timed intervals. Every time they move back, the beam becomes more narrow. With too few days left on the island, winning this immunity challenge is vital.

After a long struggle, it's David versus Zeke — but David pulls through as the winner. David is safe from elimination at the next Tribal Council.

But let's not wallow in the details — it's Chris versus Jessica back at camp, although neither of them know this yet. David reveals to Zeke that they're hoping to vote Chris out of the game. Zeke, wanting power and control in the game, pits the Gen Xers against each other by revealing (finally!) that Chris wants to vote out Jess while simultaneously flushing out Jay's immunity idol.

At Tribal Council, Jay feels that he's the biggest target, but decides he won't play his hidden immunity idol at the last minute. This is "a million dollar gamble" on his part, and it pays off. Chris is blindsided and becomes the tenth person voted off Survivor season 33 and will be the third person on the jury.

As host Jeff Probst says, the game is being played at a high level now that we move into the final days on the island. This, of course, means more blindsides are to come.

The second half of this drama-filled two-hour episode begins back at camp. Jay is glad his "million dollar gamble" worked out in his favor. Meanwhile, Zeke solidifies his alliance with Bret and Sunday, and they work towards building votes against David, who's next on their list. Bret reveals to Zeke and Sunday that David has a hidden immunity idol. David is unaware of this alliance and attempts to get Bret and Sunday on his side. He reveals to them that he wants to vote Zeke off next. Uh oh. Needless to say, tensions are high at Camp Vinaka.

The second reward challenge of this episode has three teams of three people. Each player has their feet tied and legs bound together. They will each "slither" through sand one at a time. Once all players have slithered to their marks, they will untie themselves and work together to solve a puzzle. The winning three will then be picked up by a helicopter and given a tour of their island from above and enjoy a picnic of fried chicken, mac and cheese and pie. Yum!

Of course, it wouldn't be Survivior without a twist. Instead of one person sitting out of this challenge, the person who draws the white rock will automatically go on the reward, without having to compete. The lucky winner? David.

Although Ken, Will and Jay had a very big lead against the other two teams, in the end, Sunday, Zeke and Bret slithered their way to victory. They join David on the reward. Funnily enough, this is the trio that is hoping to vote David off at the next Tribal Council. Talk about awkward.

During the reward, Bret reveals to Zeke (aka his new drinking buddy) that he is also gay. Zeke is utterly surprised by this big reveal, but is glad the two have, as he calls it, a rainbow connection. Zeke is aware that he and Bret are the perfect example of a millennial versus Gen X divide — where Zeke was never afraid to reveal this fact about himself, Bret was. Zeke says he owes a lot to Bret's generation and is happy that Bret is confiding this in Zeke ... and I'm not crying, you're crying.

After this touching moment, gameplay resumes and it's all eyes on Zeke and David. Hannah reveals that she's going to go after Zeke.

This episode's second immunity challenge is over almost instantly. Each competitor is trapped behind a cage door and forced to blindly maneuver a handle through a maze. Once the maze is complete and they free themselves from the cage, they will race to complete a slide puzzle and are guaranteed a one-in-nine shot at winning $1 million. Like I said, the challenge doesn't last long. Jay escapes the cage first and completes the slide puzzle before anyone else. He is the only one to have even freed himself. As Jeff said, this was an "official Survivor blowout." Congrats, Jay!

Back at camp, Zeke and David try to finalize their alliances, each hoping to gather enough votes to eliminate the other. Hannah attempts to play Zeke, but he catches on and decides to flush out David's immunity idol by voting her off instead. Hannah is aware she is in trouble and asks David to play the immunity idol for her.

This week's second Tribal Council is nothing short of a hot mess. Everyone is whispering to each other, it seems as though no one is confident which way the vote is going. They're all playing to the max. Bret is visibly annoyed and snaps at both David and Ken. Not cool, Bret. Not cool. Meanwhile, Sunday has convinced Hannah and Adam that they're voting for Ken tonight.

People are visibly confused going into the vote. David decides to play his immunity idol for Ken instead of Hannah, after hearing that Ken was on the chopping block. The vote ends in a tie: Five votes Zeke, five votes Hannah. Zeke and Hannah are forced to sit out of the next vote, but it ends the same way: a tie.

Jeff gives the eight castaways not on the brink of elimination the chance to unanimously vote someone off but quickly realizes that won't be a solution. Thus, Zeke and Hannah are given immunity. They, along with Jay and Ken, are safe from being voted off at this Tribal Council. The remaining six survivors are forced to blindly choose a rock that will reveal their fate. It's a $1 million rock draw and Jessica is the castaway that ends up going home.

The game has spoken and the final days on the island are shaping up to be some of the most intense yet.