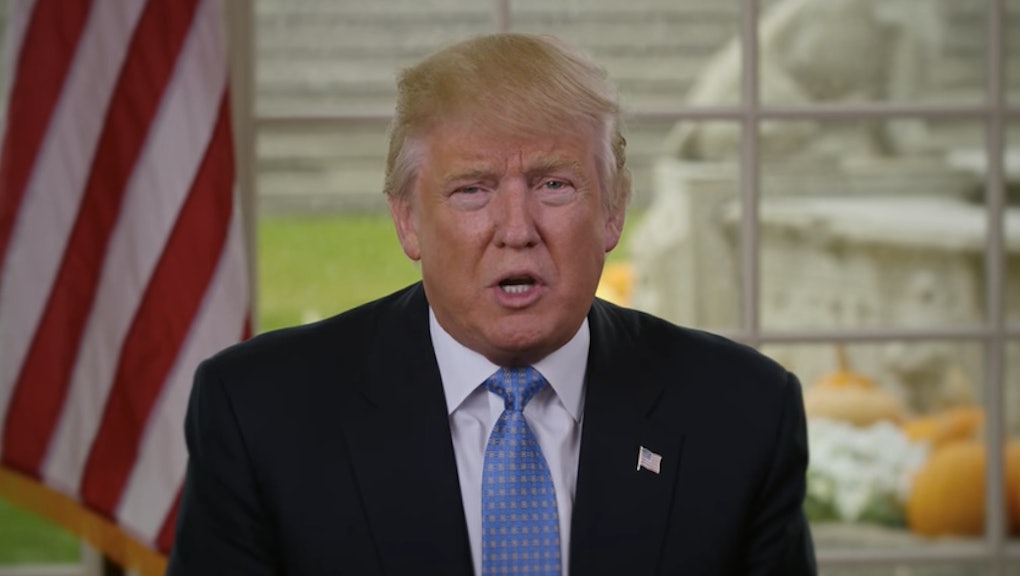 President-elect Donald Trump promises that under his leadership, Americans will do a lot of things "quickly." Healing the wounds of one of the most divisive elections in national history apparently isn't one of them.

In a brief video released by his transition team just ahead of Thanksgiving, Trump said it's "time to restore the bonds of trust between citizens" and called on Americans to join him in doing so. Per the address:

We have just finished a long and bruising political campaign. Emotions are raw and tensions just don't heal overnight. It doesn't go quickly, unfortunately, but we have before us the chance now to make history together to bring real change to Washington, real safety to our cities and real prosperity to our communities, including our inner cities — so important to me, and so important to our country. But to succeed, we must enlist the effort of our entire nation.

Speaking against the same Oval Office-style backdrop he used in his video laying out his plans for the first 100 days of his administration, Trump said it's his "prayer that on this Thanksgiving, we begin to heal our divisions and move forward as one country, strengthened by a shared purpose and very, very common resolve."

The Republican billionaire, who takes office Jan. 20 and is spending Thanksgiving with family at his Mar-a-Lago resort in Florida, quoted Lincoln's 1863 proclamation of the holiday.

He noted Lincoln had "called upon Americans to speak with 'one voice and one heart.' That's just what we have to do."

Trump's pre-holiday address comes as he continues to assemble his cabinet amid criticisms and even protests against him and members of his team, among them Chief Counselor Steve Bannon and National Security Advisor Michael Flynn.