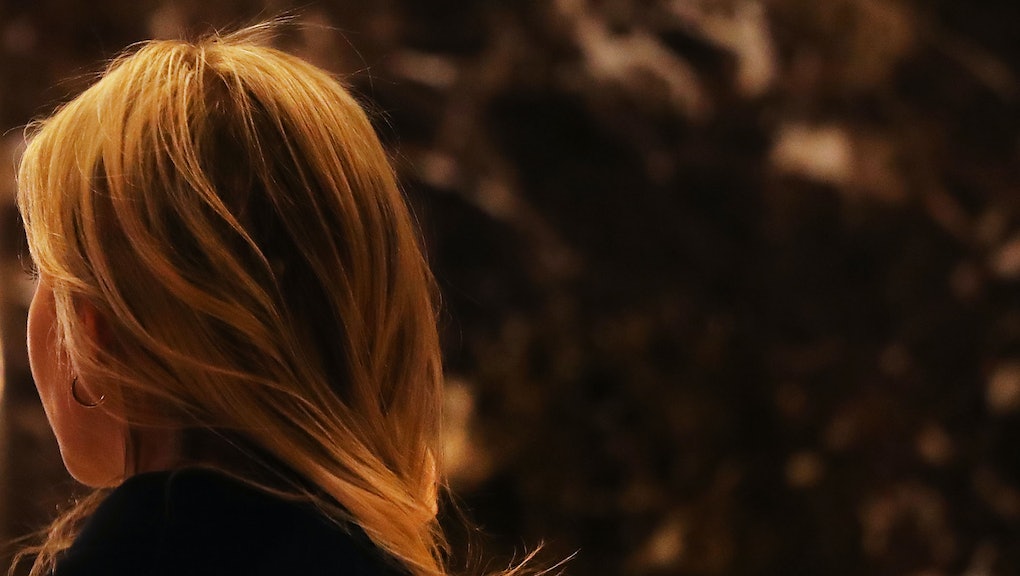 Dear Ivanka, this is what American women need right now

After your father won the presidency, you recommitted yourself to fighting for women.

Yet women are having a hard time envisioning what opportunities will exist for them in your father's America. A full 54% of women voted for Hillary Clinton, in large part because they felt she would better serve — and protect — their interests. Those women are now left to wonder who will stand for them during the next four years.

I'm writing to you because you've declared yourself a champion for women, and because yours is reportedly the only call your father will always take. You succeeded in getting him to build child care into his platform, a refreshing break from Republican orthodoxy. He listens to you. If you want to be a champion for women — for all women — the time is now.

Here's how you do it:

Equal pay for women. In your speech at the Republican National Convention, you discussed the pay gap between women and men, noting that "in 2014, women made 83 cents for every dollar made by a man." Single women, you noted, fared somewhat better, earning "94 cents for each dollar earned by a man." But mothers drew the short straw: They earned 77 cents on the dollar.

Certainly, that represents a problem. But it's not the only one: According to a recent report by the American Association of University Women, black women take home only 63% of white men's average income. Latina women, meanwhile, make just 54% of what white men do.

Push your father to improve upon the 1963 Equal Pay Act by endorsing the Paycheck Fairness Act, which would improve transparency around employee salaries and obligate employers to prove that any wage discrepancies are based on legitimate factors and not on sex. Congress' leading men — Paul Ryan and Mitch McConnell — have blocked the bill, but your father has them on his side. If he wanted to, he could make measurable gains for women in the workplace by throwing his weight behind it.

Childcare. It was heartening to hear your proposal on the campaign trail for affordable childcare, but the plan isolates opportunity within the privileged class. Your plan to rewrite the tax code, "allowing working parents to deduct from their income taxes child care expenses for up to four children, as well as elderly dependents," assumes that most working parents are paying income tax, when in reality, nearly half of households in the U.S. don't, not at the federal level.

Clinton's plan, which ensured no family would spend more than 10% of its income on childcare, would deliver more money to American families. In April, the Economic Policy Institute published a state-by-state estimation of the median annual savings for low- and middle-income families under Clinton's plan. Households with an infant saved between $350 (in Mississippi) and $8,304 (in Massachusetts). Households with an infant and a 4-year-old fared better yet — $4,289 (in South Dakota) to $21,085 (in Massachusetts) per year.

Clinton's plan was billed as "ambitious," which in Time's estimation meant "expensive and tricky to get through Congress." Child care is a worthwhile expense, and again, your father has Congress behind him. Push him to present a more ambitious plan.

Family leave. Currently, the Family and Medical Leave Act provides 12 workweeks of leave for birth, adoption, to care for a spouse or parent with an illness or to take care of one's own illness or injury. But the FMLA covers fewer than 50% of workers, according to the National Partnership for Women and Families, and only 13% of workers can take paid leave.

"As a society we need to create policies that champion all parents, enabling the American family to thrive," you said at a September rally for your father. Children benefit from paid parental leave no matter what their family looks like.

Your plan proposes six weeks of paid maternity leave, but mothers are not the only ones who care for children, and decades of research have demonstrated that longer periods of parental leave have a measurably beneficial effect on children's health. Fight for longer paid maternity leave, but also for paid paternity leave. Give it to anyone who is starting a family: to single mothers, to married mothers, to single fathers, to married fathers, to women who are married to women and to men who are married to men. At present, the FMLA applies to both mothers and fathers, albeit in a limited capacity. We shouldn't walk that back, but instead, expand it.

Consider the Family Act, which would offer up to 12 weeks of partially paid leave for qualifying workers welcoming a child, whether it's just been born or adopted. New parents would earn 66% of their typical income with a weekly limit of $1,000. The Family Act would provide for all workers no matter the size of the company that employs them, and operates on small contributions from both employee and employer — two cents on every $10 earned.

And when it comes to demonstrating your commitment to your family leave policy, the best place to start would be with the Trump Organization itself.

Access to contraception. Your father has been adamant about repealing Obamacare, but about 20 million people rely on the Affordable Care Act for medical insurance. Women in particular benefit from the ACA because it opens access to basic and necessary health services that would otherwise be prohibitively expensive. It's also mandated that contraception be covered by all insurance plans.

After meeting with President Barack Obama on Nov. 10, your father mentioned that he might consider keeping certain aspects of the ACA in place. Ask that coverage of preventative services and birth control be added to that list.

And to that end, pressure him to keep Planned Parenthood's doors open. Women who have access to contraception are more likely to get a degree and a higher-earning job, which is to say that birth control helps close the wage gap. Access to contraception also helps break the poverty cycle, ensuring that children are born to parents who are ready, both financially and emotionally, to take care of them. It reduces the burden on women, leaving us healthier, happier and able to thrive.

While Planned Parenthood is stigmatized by its status as the country's largest abortion provider, it is more accurately described as the country's largest provider of women's health services — and the people it serves are primarily people who wouldn't be able to get that care otherwise. In 2015, Planned Parenthood served nearly 5 million people, and 75% of its patients were at or below 150% of the federal poverty line.

That same year, just 3% of the services the organization provided were abortion services, while 31% were contraceptive services. These numbers are not anomalies; they are more or less consistent from year to year. And because of the educational and contraceptive services Planned Parenthood provides, it makes sense that having one nearby keeps girls in school.

While Obama has moved to protect Title X funding for reproductive health care providers, Planned Parenthood chief among them, the proposal has not yet gone into effect. Title X funds do not go toward abortion, and millions of women — especially low-income women — need them. Impress upon your father the necessity of protecting funds to health care clinics.

Abortion. Your father has suggested that Roe v. Wade, the 1973 Supreme Court decision that guaranteed women's right to an abortion, might be overturned during his administration. Your father said on 60 Minutes that a woman looking to terminate a pregnancy can "go to another state" if theirs has outlawed abortion. The reality is that most women can't just go to another state: The trip adds a financial and time cost to an already expensive procedure. If Roe v. Wade is toppled, abortion could become illegal throughout much of the country.

We already know what happens when states cut abortion access. The most prominent example is the fallout in Texas after passage of the restrictive House Bill 2 forced the closure of over half the state's 41 abortion clinics. The average distance most women had to travel to safely end a pregnancy went from 72 miles in 2012 to 111 miles in 2015. The cost rose by hundreds of dollars.

In-state abortion rates as a whole fell by 14%, while out-of-state rates rose by 11%, suggesting that some women — most likely wealthier white women — were able to secure care elsewhere. As is often the case, low-income, minority women suffered the consequences: In the wake of Texas' abortion ban, black women got 7.5% fewer abortions and Hispanic women got 18% fewer abortions; white women saw only a 6.7% drop. Meanwhile, the birth rate among women on Medicaid ticked upward. All things considered, it makes sense that between 100,000 and 240,000 Texan women have attempted to self-induce abortion in their lifetimes.

Sexual assault/rape. Words matter. When it comes to women, the fear is that your father's language tells men of all ages that they can do and say whatever they want with impunity. That's particularly chilling for sexual assault survivors.

What can he do about it? In strong and no uncertain terms, he can apologize, without excuses or deflection, for the crude conversations the nation heard on tape. He can drop his promise to sue the women who have accused him of sexual assault and misconduct. He can fund testing of the huge backlog of rape kits nationwide. He can continue funding for and promotion of Safe Place to Learn, an educational resource package that combats sexual harassment and violence from kindergarten on, so that fewer young men grow up thinking they can grab women by their genitals, brag about it and still win the White House.

One item in particular that has survivors and their advocates worried is your father's stated intention to scale back the Department of Education. Impress upon him that the Office for Civil Rights cannot end up on the chopping block. The OCR enforces Title IX, a 1972 amendment that prohibits sex-based discrimination in education. Lately, it's been used by sexual assault survivors to reform their schools' policies on sexual violence.

While one of your father's surrogates identified the OCR as "self-perpetuating absolute nonsense," it's not that: The Office is investigating hundreds of schools that have mishandled reports of sexual misconduct on campus and it is actively working to make college and university campuses safer for students — including, one day, your own children. In losing the OCR, victims of sexual assault and harassment lose one of their last resources in securing justice at schools that have already demonstrated their unwillingness to help.

The OCR is also responsible for the issuance of the May 2016 "Dear Colleague" letter that used Title IX to defend transgender students' right to use whatever bathroom is "consistent with their gender identity." But that letter isn't law, and trans students still need Title IX and the OCR to help them do something as simple as use the toilet. In April, your father said that trans people should be able to choose "the bathroom they feel is appropriate." Keeping the OCR in place is one way he can help make sure that trans women — and trans men — have a choice; please press him to keep it in place.

Your father pledged to be a "president for all Americans." Hold him to that. Make him be a president for women, too.