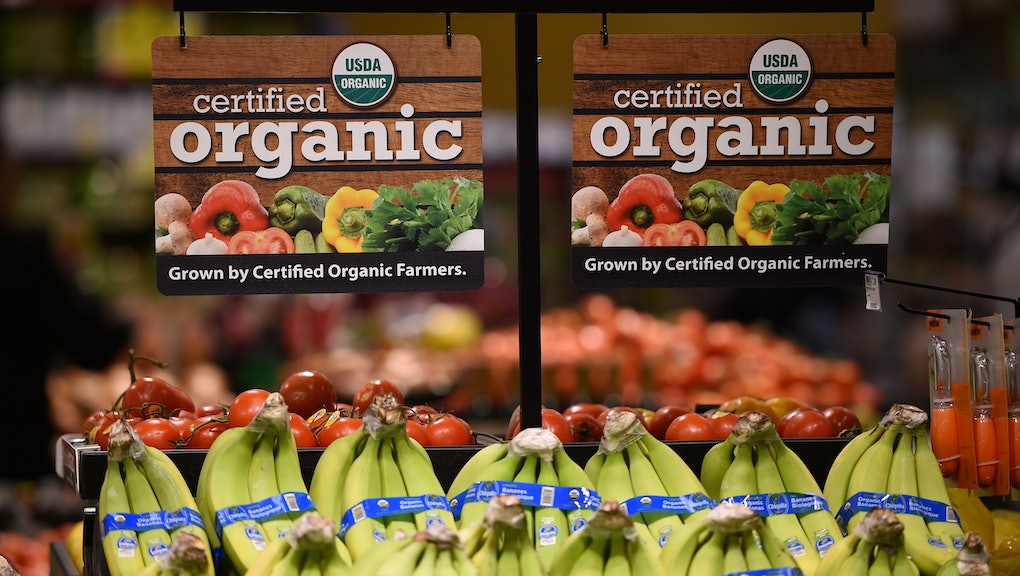 Think organic is healthier? You might just be wasting your hard-earned cash

Think organic vegetables are more nutritious than regular varieties? You're not alone. A Pew Research Center study published Thursday reveals that 55% of Americans believe organic produce is healthier than conventionally grown produce. But this is not necessarily true. Interestingly, the study found that believing organic foods are healthier has nothing to do with a person's political beliefs, education, income or geography.

So where'd we get this idea from? Food marketers have made organic foods seem synonymous with health, leading many American consumers to believe they're doing their bodies good by buying pricey organic food. A whopping 72% of U.S. consumers purchased organic food products for health reasons, while 69% made food decisions based on environmental or ethical reasons, a study from Mintel noted.

Plus, the word "healthy" is pretty vague — even the Food and Drug Administration doesn't have a formal definition for it, Mic previously reported. Here's what you need to know about organic food and your health:

While some individual studies have found that certain types of organic produce contain more beneficial vitamins and nutrients, broader studies demonstrate there is no significant health benefit to eating organic, NPR reported. Nutrient density in produce can vary greatly and isn't necessarily tied to whether a fruit or vegetable was grown using organic or conventional farming methods. For example, a carrot can have two to three times more vitamin A than another carrot due to the weather conditions when it was harvested or its state of ripeness.

"There isn't much difference between organic and conventional foods, if you're an adult and making a decision based solely on your health," Dena Bravata, senior author of a Stanford University-affiliated study, said in a Stanford Medicine press release. A 2016 meta-analysis published in the British Journal of Nutrition found that organic foods could have more nutrients, but only marginally, NPR reported.

But what about pesticides?

Some researchers criticized the Stanford study for not taking pesticide residue on conventionally grown produce into account, but it should be noted that organic produce is also grown using pesticides, albeit non-synthetic (aka not man-made chemical) varieties.

Farmers growing genetically modified crops, conventional crops or organic crops all use pesticides to protect against harmful organisms that can ruin a harvest. A 2011 survey found that 20% of organic lettuce had a significant amount of Dow Chemical pesticide, NPR reported.

Organic pesticides aren't necessarily less toxic than conventional pesticides. It all depends on how much a farmer is using, Jeff Gillman, a professor of nursery management at the University of Minnesota, told NPR. "I could use a tiny amount of a potent synthetic that has proved safe over the last 50 years, or a much larger amount of an organic pesticide," he said. "I want people to know that there are definitely trade-offs."

The United States Department of Agriculture has lots of regulations to ensure safe use of pesticides, but if you feel strongly about minimizing your conventional pesticide exposure, you can always buy organic for for the produce that has the most pesticide residue. Apples, potatoes, nectarines and strawberries have relatively higher amounts of pesticide residue.

So what does"organic" really mean?

Organic food is grown using organic agriculture. The USDA states that organic agriculture is meant to promote ecological balance, conserve biodiversity and cycle resources. But the "organic" label does not have any bearing on how healthy a product is.

"There are plenty of cookies, crackers and bars labeled organic that are nowhere close to healthy," Alissa Rumsey, registered dietitian and personal trainer, said in an email.

Unfortunately, the pervasive belief that conventional produce isn't healthy can deter people from eating a healthy diet, Toby Amidor, registered dietitian and author of The Greek Yogurt Kitchen said in an email, explaining that a recent study revealed that low-income people who couldn't afford organic actually skipped purchasing produce altogether because they thought conventional fruits and vegetables were not healthy. "As a registered dietitian, these results sadden me," she said.

Rusmey tells her clients who are looking to get healthier that eating organic is a matter of preference and that they should still eat fruits and vegetables even if they can't afford organic produce. Amidor echoed this sentiment, noting that 90% of Americans don't eat the recommended amount of vegetables. "Choosing conventional produce can absolutely help minimize the gap," Amidor said.

Will the USDA ever proactively clear up the confusion surrounding organics and health? "The USDA organic regulations do not address health claims or food safety, so this type of action would fall outside of the scope of the National Organic Standards Board," a USDA Agricultural Marketing Service representative said in an email.