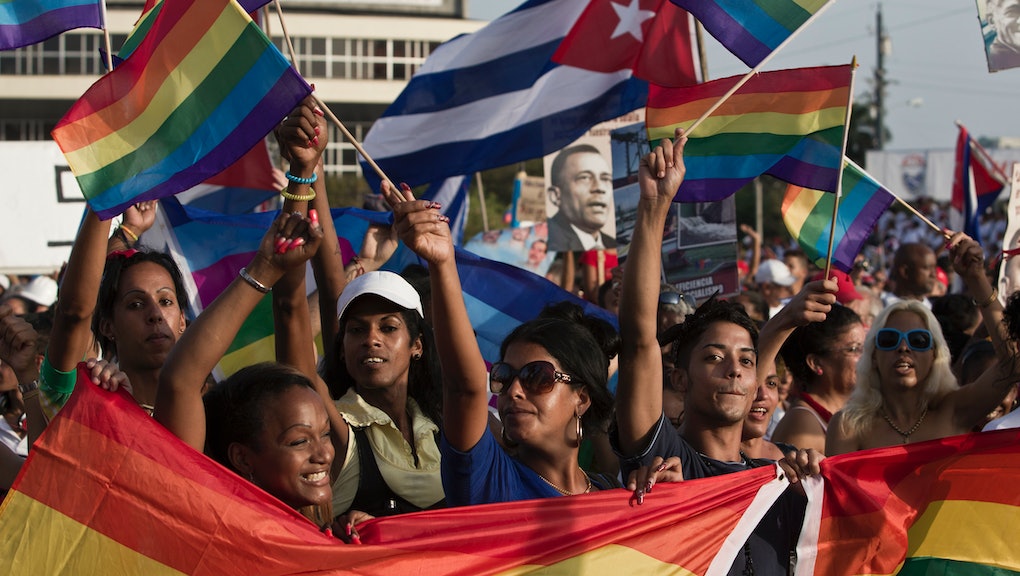 In 2010, while speaking to the Mexican newspaper La Jornada, Fidel Castro apologized for the human rights abuses that LGBTQ Cubans, especially gay men, suffered under his reign.

"If someone is responsible, it's me," Castro told La Jornada when asked about the mistreatment of gay men under his reign, according to the BBC.

There was a reason he had to apologize. Castro, who died on Nov. 25, has a complex legacy — while he is revered by some, he was also criticized by others, specifically for his treatment of Cuba's LGBTQ communities.

In 1965, with Castro in power for about six years, the Cuban government opened the Military Units to Aid Production, or labor camps, for people the government felt were anti-social or unable to contribute to the socialist revolution. According to historian Ian Lumsden's book Machos, Maricones and Gays: Cuba and Homosexuality, the camps served a double purpose: rehabilitating dissidents and others unfit for army service and extracting cheap labor from those same undesirables.

"They rounded up the people they thought they could round up and the rest of the population wouldn't scream about: the people that could be scapegoated," Arnaldo Cruz-Malavé, the director of the Latin American and Latino Studies Institute at Fordham University, said in a phone interview. "They rounded up gay people — not all gay people — the ones who they thought were out gays."

Though there was not exactly a gay community to speak of before Castro came to power in 1959, Cruz-Malavé said that, in cities like Havana, Cubans were familiar with sexual difference. Cubans played with gender and sexuality both aesthetically and culturally. Cruz-Malavé said that some women adopted a boyish form of dressing called "garçonismo" and that some of the most celebrated men of the literati were effeminate.

"You have major leading figures in literature and art, like Julian del Casal, that everyone knows that they are gay," Cruz-Malavé said. "They're not presenting themselves, they don't have a gay identity in the way we have a gay identity, but their writing is informed by queer aesthetics."

The UMAPs, as the labor camps are referred to, didn't necessarily target those who identified as gay, but focused on those who acted effeminately in public: those who were openly effeminate and eschewed masculine norms. According to Lumsden, Castro thought that hard labor would help gay guys "man up."

"One of the slogans of the camp was 'Work will make you men,'" Cruz-Malavé said.

Gay men outside of the labor camps also faced harassment. According to Eduardo Santiago, a writer of Cuban historical fiction, police harassed gay men who were effeminate in public.

"There was a time after the revolution where anyone who appeared gay would be harassed," Santiago said in a phone interview. "If your pants were too tight, they'd take you to the police station and cut your pants off with scissors."

Castro closed the UMAPs in 1968 after a barrage of criticism from Cuban literati and other leftists worldwide.

The next LGBTQ rights battle erupted in 1971, when the first National Congress on Education and Culture resolved that "all manifestations of homosexual deviation" should be prevented from spreading, according to Lumsden. To that end, gays and lesbians were banned from teaching children.

The Cuban government decriminalized consensual gay sex in 1979, 24 years before the U.S. did the same. But homophobia was still sanctioned by the government in other ways. During the famous Mariel Boatlift of 1980, many gay Cubans fled, and by several accounts, Cuba was happy to see them leave.

"Gay people were targeted and they encouraged gay people to leave," Cruz-Malavé said. "They wanted to promote the idea that people who were protesting against Cuba were 'anti-social' people who could not live in a communal setting."

When gays chose to leave during the Mariel Boatlift, the Cuban government worked to make sure the Cuban public associated them with other "criminals, delinquents and drug addicts" who were fleeing and mocked "their dress, mannerisms and language," according to Lumsden.

And when it came to the AIDS crisis, Cuban policy raised some eyebrows. Though Cuba has one of the world's smallest HIV/AIDS epidemics, it adopted the controversial practice of quarantining people with HIV in sanitariums. HIV-positive Cubans were required to live there after the first cases were identified — when Cuba started HIV testing in 1986 — up until 1994, when quarantining laws were relaxed. Since 1994, newly-diagnosed people attend eight-week training courses in the sanitariums on HIV and how it is transmitted. They then have the option to live in the sanitarium, where they are provided with free meals and doctors who specialize in HIV treatment and care.

It did get better. Nowadays, Cuba is moving towards becoming a much more accepting society toward its LGBTQ population. Mariela Castro, daughter of president Raúl Castro, and Fidel Castro's niece, is the director of Cuba's National Center for Sexual Education and is a champion of Cuba's LGBTQ population. Currently, Cuba's free health care system completely covers gender-affirming surgery for transgender Cubans, though as of 2015 some advocates say less than 30 Cubans have been able to undergo the procedure. Mariela Castro became the first Cuban lawmaker to ever vote "no" in Cuban parliament when she voted against a bill that would protect gays and lesbians from workplace discrimination — she was protesting the bill's exclusion of transgender Cubans.

The Cuban constitution currently defines marriage as between a man and a woman, and Mariela Castro has led the fight to change that definition.

Santiago, who was born in Cuba in 1957 and immigrated to the United States when he was 10 years old, often visits to interview local Cubans while writing his historical fiction and said it's "shocking" to him how comfortable Cuba is with gay culture now, given the island's sordid history.

"There's a street in downtown Havana, across from the capital building, there's just this block that's gay people that just congregate at night, up and down the block, and I thought that was really surprising," Santiago said. "I can't tell you what small towns are like. But when I went to Havana with my husband, my family didn't blink an eye. It was like 'Welcome, we love you and let's have something to eat.'"

Even though Cuba's LGBTQ community has become more visible, Santiago says that shouldn't reflect positively on Castro. When asked if he set back LGBTQ rights, Santiago said he "couldn't set back what never existed."

"It helped me think of the possibilities of liberation in the world and a lot of Puerto Ricans were indebted to the revolution," he said. "But we were also critical because of gay rights. I straddled these two worlds."

Santiago does not straddle two worlds.

"I cannot look at any part of his legacy in a positive light. Not the health care nor the improved literacy," Santiago said. "I have too much disdain for dictators."