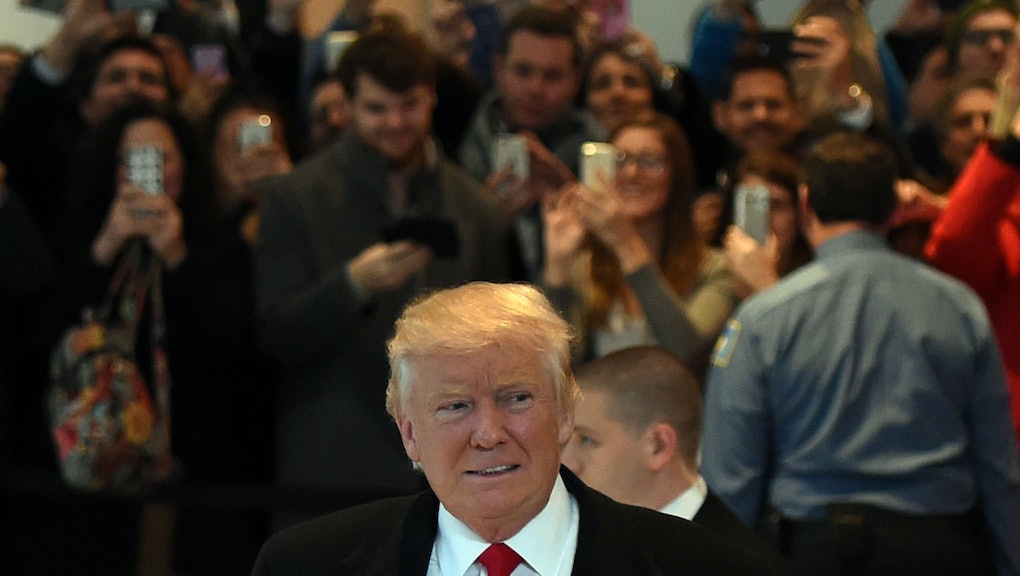 Donald Trump is lying about "millions" of fraudulent votes. Here are the real numbers.

Presumably riled up by a recount campaign that successfully raised millions of dollars to audit votes in Wisconsin, Pennsylvania and Michigan, President-elect Donald Trump tweeted to assert that "millions of people who voted illegally" is what kept him from winning the popular vote against Hillary Clinton, who now leads him by more than 2 million votes.

Trump's claim of "millions" of illegal votes is a lie.

Despite the fact that Trump's allegations of voter fraud have been debunked over and over and over and over and over again, he continues to insist that multiple studies and investigations proving voter fraud is statistically infinitesimal don't exist. Trump's insistence of a "rigged" election isn't new. However, Trump has increasingly allowed himself to become the sounding board for fake news, to the benefit of Clinton supporters clamoring for an audit.

There were two charges of voter fraud during the 2016 election — and they were Trump supporters.

An election judge in Illinois was charged with perjury after she submitted an absentee ballot for her recently deceased husband. Audrey Cook, 88, claimed she filed her late husband's ballot because "I knew he wanted to live so badly to see Trump straighten out this stinking mess." Cook is charged with two felony election-fraud counts and faces a $20,000 fine and up to five years in prison for each felony.

In October, a woman in Iowa was arrested after attempting to vote for Trump twice — once in Polk County and again in Des Moines. Terri Lynn Rote told Iowa Public Radio that she feared her first vote would be changed to a vote for Clinton because "the polls are rigged."

While voter fraud attempts have occurred, Trump's insistence that serious voter fraud exists has put states under tremendous pressure to cross-check mail-in ballots with death records and voter rolls. In Cook's case, her husband's ballot wasn't even opened because a clerk found it had been mailed in under the name of deceased person.

Trump's voter fraud claims are apparently based on a tweet.

Gregg Phillips, a former Texas Health and Human Services Commission deputy commissioner and founder of VoteStand, an app designed to aid in reporting voter fraud, tweeted that 3 million votes were cast by non-citizens. There's simply no evidence to back Phillips' claims, yet Trump has seized this tweet as the foundation for claims of illegal voting.

Fact-checking site Snopes attempted to investigate the validity of the tweet's claim and came up with... nothing. In his Twitter tirade, Trump also asserted "serious voter fraud" in Virginia, New Hampshire, and California — three states Clinton won. 270towin.com, a nonpartisan site that tracks state-by-state vote history and polling, found that New Hampshire has gone blue for the past six of seven elections, while Virginia voted for Barack Obama in 2008 and 2012 (and had nearly unanimous favorability polling for Clinton throughout the election), and California has been as blue as the day is long, but has been a major contributor to Clinton's growing lead in the popular vote.

Voter fraud is not easy to do.

Voter fraud — casting multiple votes, using fake IDs, submitting absentee ballots for dead people or submitting mail-in ballots and voting in person — is incredibly difficult to pull off in the United States. A 2014 investigation, which examined over a billion ballots, found only 31 credible instances of voter fraud.

As for Phillips' assertion that millions of non-citizens voted in the 2016 election, the Washington Post reached out asking for his evidence, which he refused to provide. However, exhaustive study found only 56 cases of non-citizens casting ballots over the course of 11 years.

Stein's recount, which has now raised more than $6 million, alleges that foreign hackers obtained voter databases to file fake absentee ballots and has called into question the integrity of direct-recording electronic voting machines. Experts have pointed to statistical irregularities in vote composition between paper-only voting precincts and electronic voting precincts.

If the audits find evidence of vote hacking and fraud, that would prove Trump's allegations true. It also threatens his mere 100,000-vote lead against Clinton in the three states Jill Stein wants to audit.