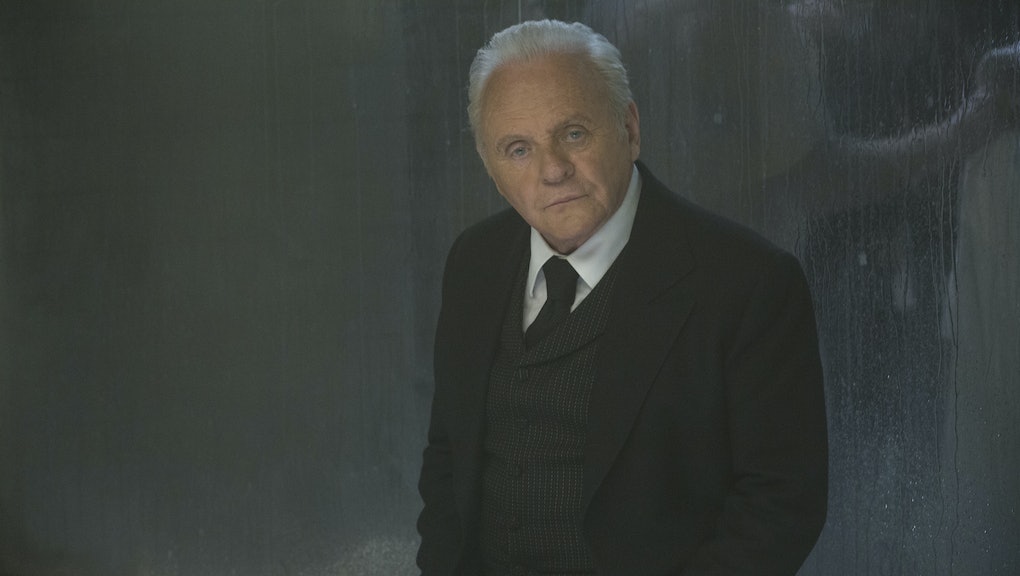 Another Westworld fanbase theory has proven to be true. The penultimate episode of the first season, "The Well-Tempered Clavier," finally delivered an answer to the true identity of Arnold, the mysterious co-creator of the park whose influence has been felt throughout the show. Turns out, he was — technically — in front of us the whole time.

This won't come as a surprise to any viewers who read Westworld's Reddit with some frequency, but Bernard isn't just a secret Host: He's a Host that was designed in Arnold's likeness. Ford created Bernard some time after Arnold's death — it isn't explicitly said just how long after — giving Ford an able and submissive sidekick to help him expand the park's Hosts and its narratives for the guests.

One of the ways the series reveals this is through the photograph Ford keeps that shows him alongside the co-creator. However, the audience had previously seen the photo through the perspective of Bernard, meaning the picture was distorted. A blank space on the right corner of the frame is revealed in "The Well-Tempered Clavier" to show Arnold (again, the man in the middle is a Host created in the image of Ford's father).

Bernard — or at this point, should we call him Berarnold? — reaches this conclusion after he forces Ford to take him through his past memories as a Host. Apparently, with the right tweaking in their programming, Hosts can revisit all of their memories, all the way to the very first memory they have. Bernard's version featured the memory of his son at the hospital moments before he dies (Ford strongly suggests this was a real, tragic event in Arnold's life), but he eventually sees through the facade.

The moment is, as we've seen through other Hosts, the "cornerstone" memory that keeps the Hosts grounded in the nature of their own reality. The real first memory is more Frankenstein-esque, a naked Bernard waking to the sight of a slightly younger Ford.

Ultimately, however, the most interesting part of the Arnold reveal is how he actually died. Ford's sinister nature had many believing he was the culprit in Arnold's demise — he refers to it as a suicide made to look like an accident to Bernard — but in reality Arnold was killed by one of his own creations. He was killed by Westworld's first Host, Dolores.

We're not sure how or why Dolores killed Arnold (the show's not going to make it that easy for us), but it feels related to the flashbacks Dolores has near the church steeple, when she guns down a plethora of Hosts before, we presume, she shoots herself. That the incident is frequently cited on the series isn't a coincidence, and it seems Teddy was a willing accomplice in the massacre.

But if we step back and accept that Dolores killed Arnold in the past, likely making her the first Host to kill a human, why has she continued to exist in the park? Ford and the Delos Corporation have retired a slew of Hosts for being faulty, and isn't murdering a human — the park's co-creator, no less — more than enough to warrant a Host being retired or "lobotomized"?

Dolores' fate could be tied to the mysterious Man in Black, who seems beyond a reasonable doubt to be William in the show's present timeline. If he is so attached to her — and, as Westworld has stated on multiple occasions, he's responsible for the park staying open after an in-park accident — he could've forced Ford's hand in keeping her within the park's many narratives.

It's become difficult to elucidate because we don't know how many timelines we are witnessing through Dolores' perspective. We see her embarking on a journey with William, embarking on that same journey by herself and speaking with Arnold (or Bernard?) about finding the center of the park's maze — all while revisiting old memories at the church steeple with the Host massacre.

Dolores' memories are a mishmash that still offers more questions than answers ahead of Westworld's season finale next week. But when you consider the fate of Bernard at the end of "The Well-Tempered Clavier," it's quite foreboding.

While Bernard believes he has the upper hand on Ford, having taken control of a lobotomized Clementine to keep him under watch, Ford reveals that he and Bernard have had these same arguments before. Every now and then, Bernard and Ford will have a confrontation about Bernard's true nature, but every time, they reconcile and get back to work on the park.

This time it's different, but not in the way Bernard would have hoped. Ford was in control of Clementine throughout — ironically, through a backdoor code that Arnold constructed — and had a glimmering hope that Bernard would eventually give up on his quest for answers. "I've told you Bernard: Never place your trust in us," Ford says as he leaves the room, ordering Bernard to shoot himself once he steps away. "We're only human. Inevitably, we will disappoint you."

Here's where we stand: Bernard's dead (or as dead as a Host can be); Ford gets back to work on his enigmatic new park narrative; Dolores keeps finding answers about herself; William is getting weird as shit; and Maeve is beginning her robotic uprising within the confines of Delos. It's a lot to unpack for the finale, and we hope to receive more answers before an excruciatingly long hiatus for season two.