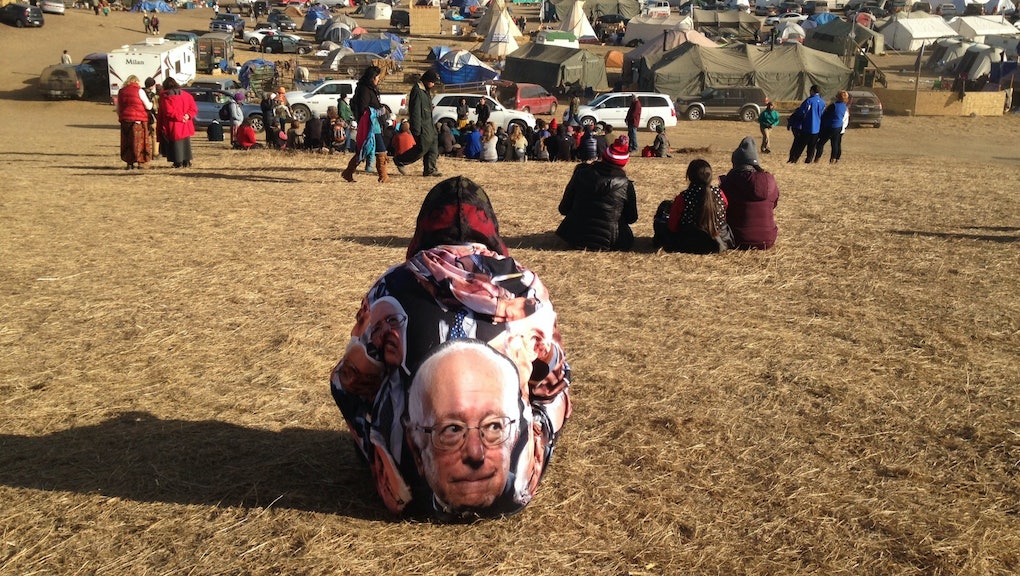 On Friday, the U.S. Army Corps of Engineers delivered a letter to the Standing Rock Sioux Tribe stating that protesters will no longer be allowed in a portion of "Corps-managed federal property north of the Cannonball River" starting Dec. 5.

"This decision is necessary to protect the general public from the violent confrontations between protestors and law enforcement officials that have occurred in this area, and to prevent death, illness or serious injury to inhabitants of encampments due to the harsh North Dakota winter conditions," reads the letter, which was reported on by NPR.

The "violent confrontations" have so far included authorities shooting protesters with rubber bullets, deploying pepper spray and tear gas and using a water cannon to douse protesters in below-freezing weather. A woman who allegedly sustained injuries after being struck by a police grenade may lose her arm.

Film director Josh Fox, who was on-site, told NBC News the violence has been largely unprovoked. "The police pepper sprayed people sitting in the water," he said.

On Sunday, the U.S. Army Corps maintained that authorities had no plans to forcibly remove the protesters and were hoping for a "peaceful and orderly transition to a safer location."

Still, tribe members have only doubled down on their commitment to protecting their land and water from the proposed $3.8 billion dollar pipeline. (See the map that lays out how the pipeline would affect the drinking water of millions here.)

"We are wardens of this land," Oglala Sioux member Isaac Weston told the Associated Press. "This is our land and they can't remove us."

In a press release on the official website for the Standing Rock protest, Standing Rock Sioux Tribe's chairman, Dave Archambault II said that while he and the members of his tribe are "deeply disappointed" by the Army Corps' decision, their determination to protect their water is "stronger than ever." He called on President Barack Obama and the federal government to halt the pipeline and move it outside the bounds of the tribe's treaty lands.

In an interview with NowThis News in early November, Obama said his administration was "monitoring" the Standing Rock protests closely.

"Right now the Army Corps is examining whether there are ways to reroute this pipeline," he said. "We're going to let it play out for several more weeks and determine whether or not this can be resolved in a way that I think is properly attentive to the traditions of the first Americans."

However, as the end of his term rapidly approaches, it is becoming increasingly pressing for Obama to take action. His successor, President-elect Donald Trump, owns stock in the company building the pipeline, which presents a significant conflict of interest if he is ultimately the one to make a call on it.

"It is both unfortunate and ironic that [Friday's] announcement comes the day after this country celebrates Thanksgiving — a historic exchange of goodwill between Native Americans and the first immigrants from Europe," wrote Archambault.

"Although the news is saddening, it is not at all surprising given the last 500 years of the treatment of our people," Archambault continued. "We have suffered much, but we still have hope that the president will act on his commitment to close the chapter of broken promises to our people and especially our children."