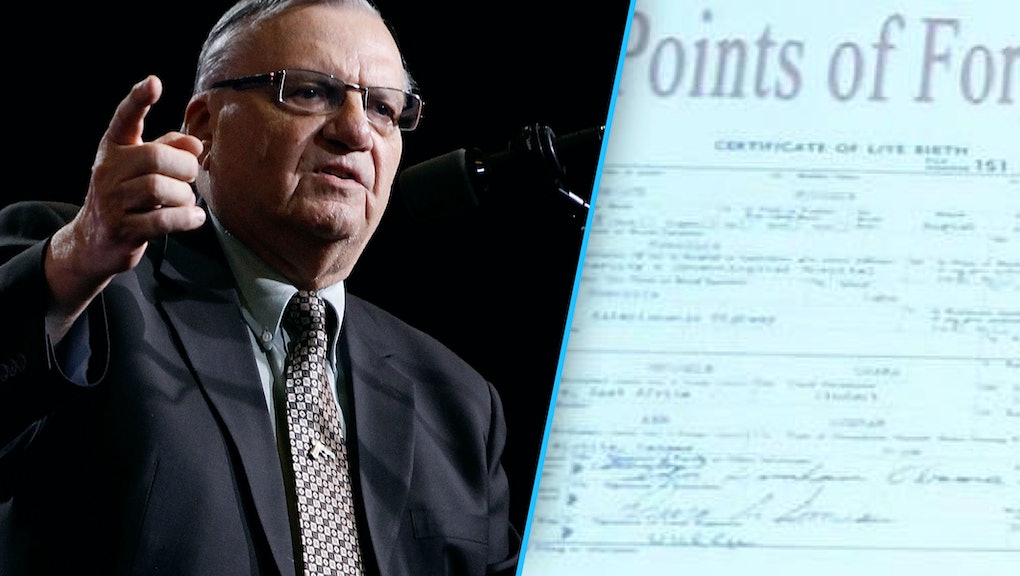 A video prepared for the event, called "9 Points of Forgery," points to alleged similarities between Obama's birth certificate and the birth certificate of a woman named Johanna Ah'Nee, who was born two weeks after Obama at the same hospital.

Mike Zullo, a member of Arpaio's "Cold Case Posse" — a group of volunteers who helped the birther movement flourish — spoke at the conference. He insisted their years-long obsession with Obama's birth certificate was an effort to prove the president was from the United States, not to delegitimize his presidency.

"The Obama certificate of live birth ... is a fraudulently manufactured document," Zullo told the audience of mostly reporters.

Arpaio didn't offer any evidence or take questions from the media, stating he had additional evidence that was too sensitive to share. However, he did say he would hand over his findings to the federal government to pursue its own investigation.

During his campaign, Donald Trump made a short speech about the birther movement he helped start: "President Barack Obama was born in the United States, period." Trump was one of the most persistent and earliest proponents of the movement, helping to push the fringe conspiracy into mainstream media.

Arpaio's conference comes three weeks before the end of his 24-year tenure as Maricopa County sheriff, which will close in disgrace: Arpaio was recently charged with contempt for refusing a federal judge's order to stop enforcing civil immigration laws that effectively amounted to racial profiling. On Thursday, a woman filed a lawsuit against Arpaio and Maricopa County, claiming the sheriff's office "racially profiled her and unconstitutionally detained her" earlier this year.

In the 2014 documentary The Joe Show, Arpaio admitted the effort "may look nuts," but espoused the benefits of pushing the birther investigation with two of his advisors. "You see the polls go [up]," he told them in the film. "You'll get more money than you know what to do with."