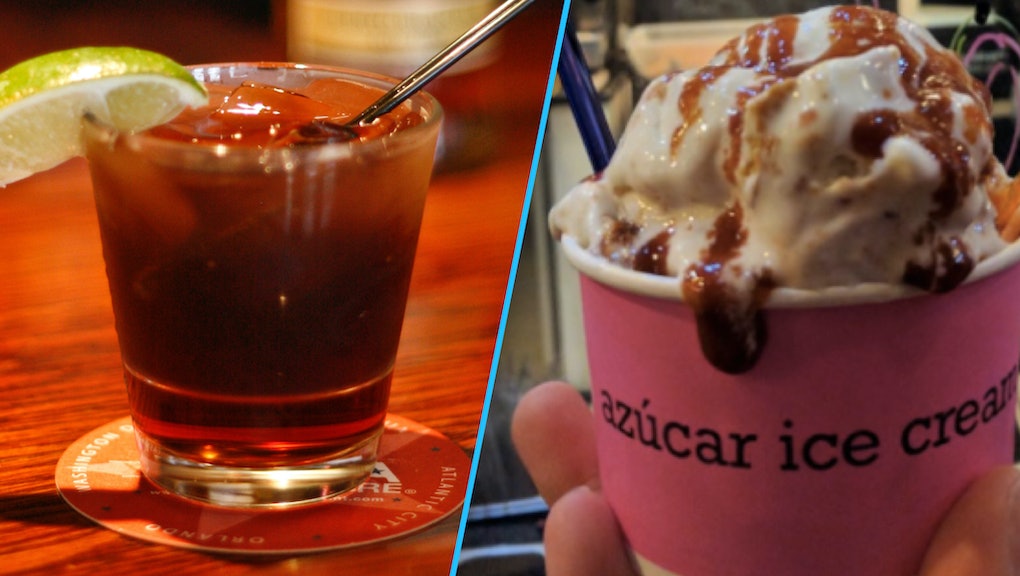 Some Cuban-Americans toasting the death of controversial Cuban leader Fidel Castro can score a free drink, coffee or Castro-themed ice cream to commemorate the occasion.

Since his death Friday, many Cuban-Americans have been celebrating Castro's passing as he was a  symbol of terror. Though some praised him as a nationalist hero, Castro initiated political executions, abused human rights and censored news.

Now, restaurants in the United States are giving customers a tasty way to celebrate.

"We are thrilled that this complimentary Cuba Libre cocktail promotion has led to greater engagement and discussion about Cuba, and we hope for a positive change in the lives of Cuba's people, and the country's future."  — Guillermo Pernot , chef-partner of restaurant chain Cuba Libre

At Sergio's Restaurants, a Miami-based chain, customers were treated to a free cafecito (Cuban coffee) on Saturday. The chain also offered free Cuba Libre drinks (which literally means "Free Cuba") to customers at two of the chain locations on Saturday, a spokesperson said in an email.

At Azura Ice Cream in Little Havana, Florida, customers can currently order a new flavor called "Burn in hell, Fidel." According an Instagram post the shop uploaded on Sunday, the flavor is a chocolate ice cream flavored with cayenne.

The Cuba Libre Restaurant and Rum Bar decided one day of free drinks wasn't enough though — customers can get one free Cuba Libre cocktail during happy hour (5 to 7 p.m.) every day until Castro's funeral Sunday, Cuba Libre's chef-partner Guillermo Pernot said in an email.

"The promotion has been very well-received thus far," Pernot said, "and we anticipate that guests will continue to enjoy the complimentary Cuba Libres throughout the week, leading up to Castro's funeral." He noted the restaurants have seen an uptick in business after Castro's death.

"But more importantly, we have seen an increase in interest in Cuba (its history, culture and people) among our staff, social media followers and guests," Pernot said. "We are thrilled that this complimentary Cuba Libre cocktail promotion has led to greater engagement and discussion about Cuba, and we hope for a positive change in the lives of Cuba's people, and the country's future."

Sipping on a Cuba Libre (rum, Coca-Cola and lime) is an appropriate way to celebrate the country of Cuba. Many believe the drink was born after the Spanish-American war, when Col. Theodore Roosevelt and U.S. soldiers arrived in Cuba during the island's fight for independence, Paste Magazine noted, explaining one captain ordered a Bacardi with Coca-Cola while toasting Cuba's liberation. However, Paste noted that Coke wasn't available in Cuba until roughly 1900, so there are a few holes in this legendary story. Don't you hate when facts ruin legends?

Either way, Cuba Libre is a sweet beverage that many were drinking this weekend.

How to make a Cuba Libre

Here's a recipe from Cuba Libre Restaurant and Rum Bar.

Fill a high-ball glass with ice. Add rum and fill the glass with Coke. Garnish with a lime wedge.