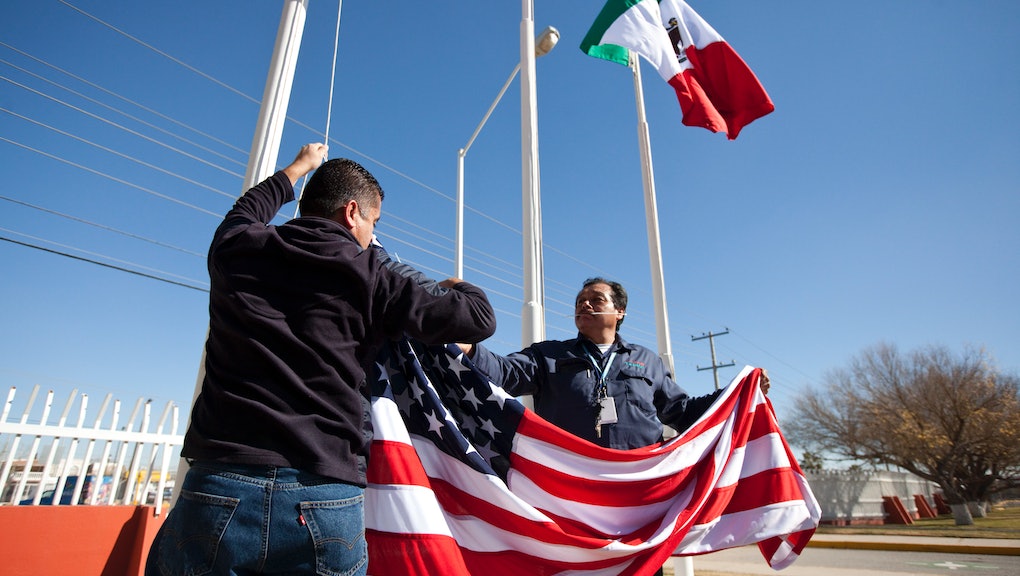 Could Donald Trump pull the US out of NAFTA? Here's how that would affect Americans.

Mexico's finance minister José Antonio Meade touted the benefits of the North American Free Trade Agreement during a trip to the United Kingdom, the Financial Times reported Monday. NAFTA is currently on the chopping block for either renegotiation or withdrawal during President-elect Donald Trump's first 100 days, Trump has said.

Unlike the Trans-Pacific Partnership, which is still awaiting approval by Congress, NAFTA has been in place for more than two decades and has helped increase trade between Canada, Mexico and the United States from less than $300 billion in 1993 to more than $1 trillion in 2016, according to a report from the Wharton School at the University of Pennsylvania.

Indeed, many U.S. jobs — 6 million, according to the U.S. Chamber of Commerce — currently depend on free trade with Mexico.

The key to NAFTA's liberalizing effect on trade is that it eliminates a lot of the taxes on imports and exports between the three partner countries, which makes trading cheaper. Getting rid of the agreement, Meade argued, would be bad for everyone involved.

"The damage assessment is not just Mexico's," Meade told the Financial Times. "There is no interest on either side in destroying value."

There is a lot at stake for Mexico, which depends greatly on exporting goods to the U.S.: One source told the Guardian that closing off trade between the two countries could very well "bankrupt the economy."

But American workers and consumers would also feel financial pain if a renegotiation of the trade agreement required major concessions from the U.S. — or if NAFTA got the ax altogether.

According to Gary Hufbauer, a senior fellow at the pro-trade Peterson Institute of International Economics, Trump's beef with the trade agreement has to do with the fact that the U.S. exports fewer goods to Mexico than it imports.

"He really looks at bilateral trade balances, and if the U.S. is running a big deficit with a country, he thinks that's a sign of unfairness," Hufbauer said, cautioning that "there's very few economists that think that."

In fact, repealing NAFTA could raise costs, and therefore prices, for U.S. consumers, particularly in the automotive sector, Hufbauer said. And in general, producing consumer goods in the U.S. instead of abroad could mean higher prices for American shoppers on products like shoes, televisions, solar panels — and for other imported goods like iPhones.

Losing the North American agreement would also hurt communities in the U.S. that produce exported goods, Hufbauer noted. "There's going to be a lot of blowback in Congress because their constituents will be hurt."

Trump could feel backlash in particular from states like Texas — which processes 65% of the total trade between the U.S. and Mexico, according to Census Bureau data reported by the Austin American-Statesman.

Plus, the integrated supply chains provided by NAFTA means that even those products that are categorized as imports from Mexico may have materials and labor originating in the U.S.: 40 cents of every dollar spent on Mexican imports technically comes back to America for that reason, according to nonpartisan research group the Woodrow Wilson Center. For every dollar spent on Canadian imports, 25 cents comes back.

Hufbauer noted the possibility that Trump could step back from his protectionist trade rhetoric once he gets into office, pointing out that some of Trump's other proposed reforms — to the tax code, for example — could be easier to pass, and therefore are more likely to remain a priority.

That Trump may relent somewhat on trade was also echoed by National Security Advisor Susan Rice, who told CNN that "campaigns are campaigns and governing is governing. And they're very different things."

Then again, if even a portion of Trump's campaign rhetoric regarding his economic plans manifests into new policies, American workers and consumers might be unpleasantly surprised by the outcome.