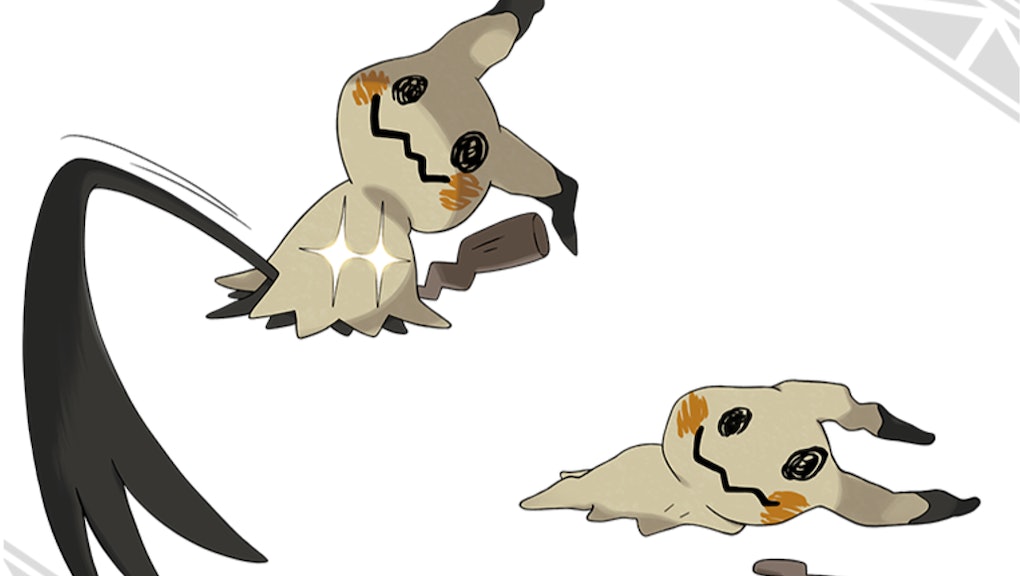 How to catch Mimikyu in 'Pokémon Sun and Moon': Location, true form and more

Mimikyu is one of the oddest creatures introduced in Pokémon Sun and Moon. This ghost/fairy-type Pokémon disguises itself as a Pikachu to hide its true form. The result is either adorable or terrifying, depending on who you ask.

Regardless of your opinion of Mimikyu, you'll still probably want to catch one if only to fill out your Pokédex in Pokémon Sun and Moon. Here's everything there is to know about this mysterious new pocket monster.

Where to find and catch Mimikyu in Pokémon Sun and Moon

According to Prima Games, you can find Mimikyu on Ula'ula Island. Specifically, you'll want to travel south on Route 14 until you reach the Thrifty Megamart. You'll have to complete the Island Challenge before you can go any further, so take care of that if you haven't already.

Once you're ready, head into the Megamart and start walking around. Mimikyu is pretty rare, so it might take a while before one pops up. In the meantime, be prepared to take on plenty of wild Golbats. You can use the opportunity to train your weaker Pokémon or just run from everything until you find a Mimikyu.

How to catch Mimikyu in Pokémon Sun and Moon

Once you manage to find a Mimikyu, you'll still need to catch it. This Pokémon may look small, but it's actually a pretty tough fighter with an impressive Special Defense stat of 105. It's also immune to normal, fighting and dragon attacks, and it's resistant to bug-type attacks. So make sure you have a solid lineup before heading into battle.

On the plus side, Mimikyu is weak against ghost- and steel-type Pokémon — so you may want to stick a few of those in your lineup to make the job a little easier.

Pokémon Sun and Moon: Everything else we know about Mimikyu

Described as a "Disguise Pokémon," Mimikyu wears a Pikachu costume to protect other people from the shock of seeing its true form. It's special ability, Disguise, allows Mimikyu to avoid taking any damage from an enemy attack, but it only works one time during a battle.

Here's more information on Mimikyu from The Pokémon Company:

Mimikyu lives its life completely covered by its cloth and is always hidden. People believe that anybody who sees its true form beneath the cloth will be stricken with a mysterious illness. People in the Alola region are convinced that you must never try to peek beneath its covering. Mimikyu's health fails when it's bathed in the rays of the sun, so it prefers to stick to dark places. It's rumored that the reason it covers itself with a cloth is to avoid sunlight.

Pokémon Sun and Moon guide, tips and tricks: Everything you need to know

If you're serious about Pokémon Sun and Moon, you'll want to read up so you can be the very best. Check out our guides for picking the right starter, Pokémon Sun and Moon cheats, using a damage calculator, how to catch the new legendary Pokémon, how to get Munchlax, how to customize your character, how to trade, how  to find all the evolution stones, how to use QR codes, which Pokémon to catch early on and picking between Pokémon Sun and Pokémon Moon.