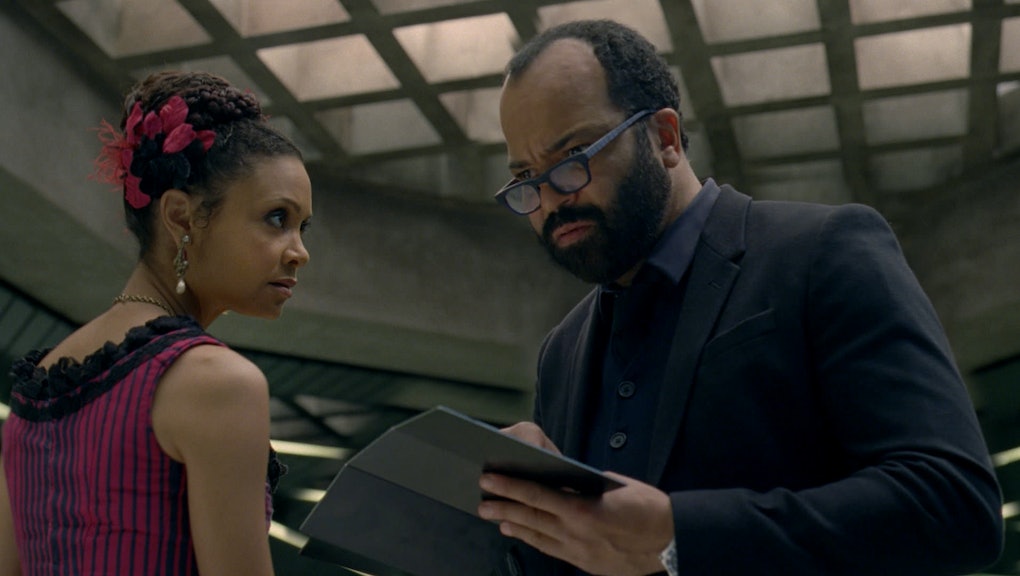 5 predictions for the 'Westworld' season 1 finale

Where does Westworld stand ahead of its season finale? It's a loaded question for a show laced with conundrums facing all of its major characters. We have Ford building his new narrative, which seems irrelevant given the chaos surrounding the park; William continues his disturbing journey after murdering and dissecting a shitload of Hosts (not creepy); Maeve has assembled other Hosts for her robotic uprising; and Dolores learned that she killed Arnold way back when. Speaking of Arnold, Bernard is actually a Host version of him created after Arnold's death by Ford.

Did we miss anything?

Suffice to say, Westworld's season one finale has a lot to work with, so it's good to hear that the final episode, "The Bicameral Mind," will be a whopping 90 minutes. Westworld's showrunners have assured viewers the show will answer all of its biggest questions ahead of season two — aside from a broader look at what we should expect next year. This should assuage any concerns that the show was becoming the new Lost; in other words, providing more questions without answering any of the old ones.

But where does this leave us come Sunday, and what should viewers expect? Here are five predictions for the Westworld finale.

William's identity is formally revealed. While the show has held mounting evidence that William is the mysterious Man in Black during his first visit to the park, it hasn't been explicitly stated on-screen. However, they've come just short of making this formal reveal in the show's penultimate episode, as Logan shows William a picture of his sister, William's fiancee.

It's the same photo of a woman posing at Times Square that Dolores finds in the series premiere, causing her Host father, Peter, to malfunction. It's one of several clues — or at this point, it's likely a fact — that William's storyline exists in the past.

The finale sets up present-day Dolores coming face-to-face with the Man in Black at the church that's become the epicenter of the series' biggest mysteries. Given that Dolores, like the other Hosts, has begun to recollect her memories from the past, our money's on her coming to the conclusion that the Man in Black is William: a tough pill to swallow given their ill-fated romance in the older storyline.

Dolores is actually Wyatt. It's clear now that Dolores was the culprit in an early Host onslaught at the park, though for what reason we still don't know. It appeared that Dolores acted on her own, but Angela reveals to Teddy that he was complicit in the massacre.

The shooting, from Teddy's perspective, was started by Wyatt, Teddy's former Army sergeant who went rogue and killed all of his men — sans Teddy. Teddy explains back in episode three that Wyatt did this to appease some type of God that he believes was speaking with him (Remember: These are all memories artificially constructed by Ford). However, with Angela's help, Teddy begins to remember the massacre the way it actually happened. It wasn't an army, and by extension, he wasn't working with Wyatt: It was Dolores.

Wyatt doesn't exist, and at this point it wouldn't make sense for Westworld to introduce a villain in the final episode of the season. The voice in Dolores' head was most likely Arnold trying to help her gain some type of sentience, which clearly goes awry since Dolores killed him. Ultimately, Dolores may not be aware of her new narrative in the park in charge of bloodthirsty Hosts in terrifying masks, but we expect she'll come to terms with it soon now that she's made it to the church steeple where everything began.

Elsie is still alive doing... something. When Bernard revisits his old memories, he learns (technically, for a second time but his memory was previously wiped) that he was the person who attacked Elsie earlier in the season. He has her in a chokehold, and considering how Ford made Bernard brutally murder his former love interest Theresa, it's easy to assume a similar fate was dealt to Elsie.

But in both instances, we don't see Elsie actually get killed — though yes, it's not looking good. This feels intentional, however, considering Stubbs learns that her beacon was activated in the park. Who else could've done it?

Given the somewhat vague nature of Elsie's death, coupled with her beacon going off, we believe Elsie is still alive somewhere in the park. The real question is what she's been up to if she's still alive, and why Stubbs was attacked by Ghost Nation Hosts that he wasn't able to control. What Elsie plans to do, if she is alive, is still very much in the air.

Maeve's uprising is part of Ford's new narrative. As entertaining as it's been to watch Maeve slowly coerce Felix into turning her into a super-Host able to control other robots with what basically amounts to Jedi mind tricks, we have a hard time believing her rebellion has fallen completely on deaf ears. If the regular Delos workers aren't aware of what Maeve is up to — which is entirely possible — we don't believe it's escaped the grasp of Ford.

Remember, Ford is acutely aware of everything that happens in the park. He can tap into knowledge from other Hosts — it's how he's able to learn secrets about Theresa inadvertently through Bernard before Bernard kills her. By that logic, he may not just be aware of Maeve's journey: He may be supporting it as part of his mysterious new narrative.

We know very little about Ford's newest storyline for the park, which is a glaring omission with just one episode remaining this season. But considering part of it includes "Wyatt," whom we presume is actually Dolores, turning into a killer, it's not a stretch to assume Maeve's change is also, somewhat, by design.

Think about it another way: The Delos Corporation board wants to force Ford out of Westworld, and he's been increasingly hostile in response, going so far as to murder Theresa. An alternative for Ford to prove his value to the board is through showing how dangerous the Hosts can be without proper control, aka when Maeve and co. run rampant. It'd be a risky gamble considering the Hosts' increased self-awareness, but Ford is insistent on staying at the park. We wouldn't put anything — including Maeve's sudden uprising — past him.

At least one Host will leave the confines of the park. Westworld's showrunners have said they envision the show going at least five seasons, which is ambitious. But it also means the series will almost definitely make its way outside the confines of the park to keep things interesting. Maybe, by the end of season one, at least one of these Hosts will make their way to the real world.

If any Host has a good chance of making it outside of Westworld, it could be the first iteration of Peter Abernathy, Dolores' father. He is decommissioned after his incredible monologue (all the more impressive since he's buck naked the whole time!) to Ford and Bernard in the premiere, but in episode eight Charlotte asks Lee to smuggle stolen data about the Hosts through Peter. Therefore Lee should, in theory, be taking Peter outside of the park to achieve this.

Who knows what could happen to a Host outside of the park — they're supposed to literally explode if they try to leave, but we envision some type of loophole — but Peter would be a foreboding presence, considering he enjoys quoting insidious Shakespeare lines.

The 90-minute Westworld finale airs at 9 p.m. Eastern on Sunday on HBO.