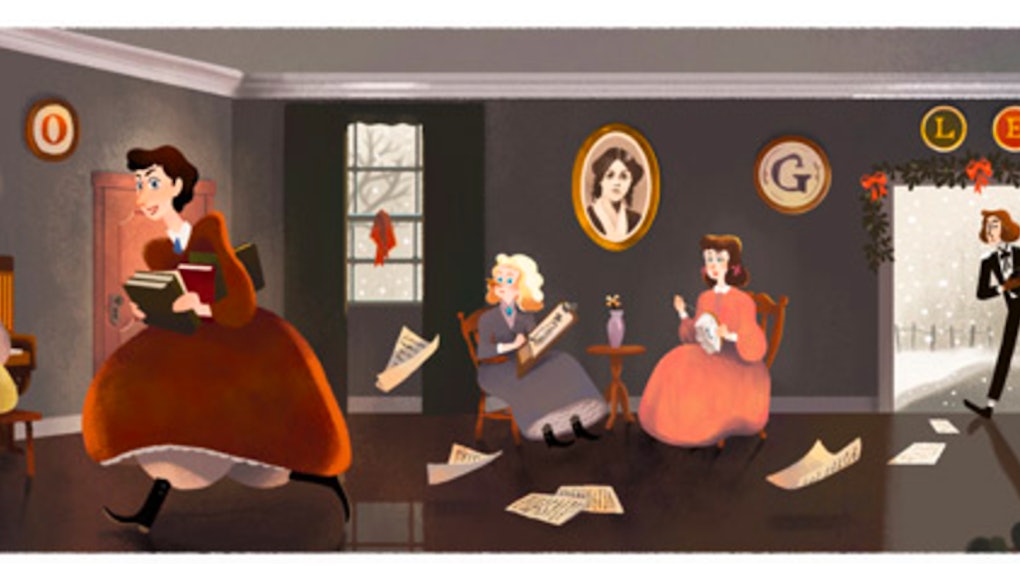 If Louisa May Alcott were alive today, these are 4 social justice issues she'd care about

Little Women author Louisa May Alcott's 184th birthday is the subject of today's Google Doodle. In her obituary, the New York Times focused solely on the work that made her a household name, insisting that "her fame rested chiefly on her first successful story, Little Women, and it was that story that endeared her to so many hundred thousands." While her most famous work has painted her as a moral compass for youth, Alcott's true passions rested in bloody, sensationalist pulp fiction and social justice.

In 1879, Massachusetts passed a law allowing women the right to vote in town elections, but only on issues involving children and education. Although Alcott never married or had children, she jumped at the opportunity to vote and became the first woman to register to vote in Concord, Massachusetts. She tried to encourage other women to do the same by organizing reading groups and sharing petitions, but she was frustrated with the response. Confiding in her journal, Alcott expressed strain in motivating others:

Trying to stir up the women about Suffrage. So timid & slow ... Drove about & drummed up women to my Suffrage meeting. So hard to move people out of the old ruts.

The following year, Alcott and 19 other women attended a Concord town meeting and cast their ballots. After the town hall, Alcott wrote, "No bolt fell on our audacious heads, no earthquake shook the town." She continued to rally women around voting rights until her death.

Were she alive today, Alcott might be tweeting her concern over the Supreme Court's decision to gut a key part of the Voting Rights Act.

As a child, Alcott's home became a stop on the Underground Railroad and her family housed a fugitive slave. When the Civil War began, Alcott spent time sewing Union bandages. When she turned 30 and was old enough to enlist as an army nurse, Alcott successfully pushed to waive the ban on unmarried women enlisting and worked in Washington, D.C., where she tended to wounded soldiers. Her time as an Army nurse was the basis for her first best seller, Hospital Sketches.

Growing up under the tutorship of Ralph Waldo Emerson and being acquainted with Frederick Douglass and Harriet Tubman, Alcott's life was molded into one of literary prowess and social justice work. In today's climate of police brutality and hate crimes, Alcott's association with anti-slavery leaders, early education in racial equality and later support of abolition would likely lead her to fighting against mass incarceration and systemic racism.

Although Little Women is Alcott's most famous work, it was also her least favorite. Alcott much preferred the lurid, writing stories of "blood and thunder," usually under the pen name A.M. Barnard. These works, which were essentially 19th century pulp fiction, were fueled by Alcott's delight in writing "silly" tales.

After her stint as an army nurse, Alcott hopped across the pond to Europe to work as a personal nurse. While there, she fell for a Polish freedom fighter, but the relationship would never flourish. She believed that, as a wife, she'd have no economic or legal identity and that motherhood would prevent her from earning a living. Instead, according to the website for the 2009 documentary Louisa May Alcott: The Woman Behind Little Women, she decided to "paddle [her] own canoe."

Today, Alcott's dilemma would be partially resolved: She'd have economic and legal identity in marriage, but would have a hard time finding a job with paid family leave. Were she to need an abortion, well, she'd have far better luck in the United Kingdom.

Although she used writing as a creative outlet to cope, the stress of financial instability and strain had a definite impact on Alcott's childhood. When she was 11, she wrote, "I wish I was rich, I was good and we were all a happy family this day." At the age of 16, Alcott began providing for her family as a teacher. Little Women would provide the fame and comfortable income for her family that Alcott dreamed of in her youth, but she still had to sew and sell works under a pen name to magazines to get by.

In an interview with NPR, Alcott scholar Harriet Reisen spoke about Alcott's family. "They really ate bread and water for stretches," she said. "[Louisa] was hungry, and she worked to rescue her family from poverty."

Were Alcott alive today, she might partake in the nationwide #FightFor15 strike in support of a living wage.