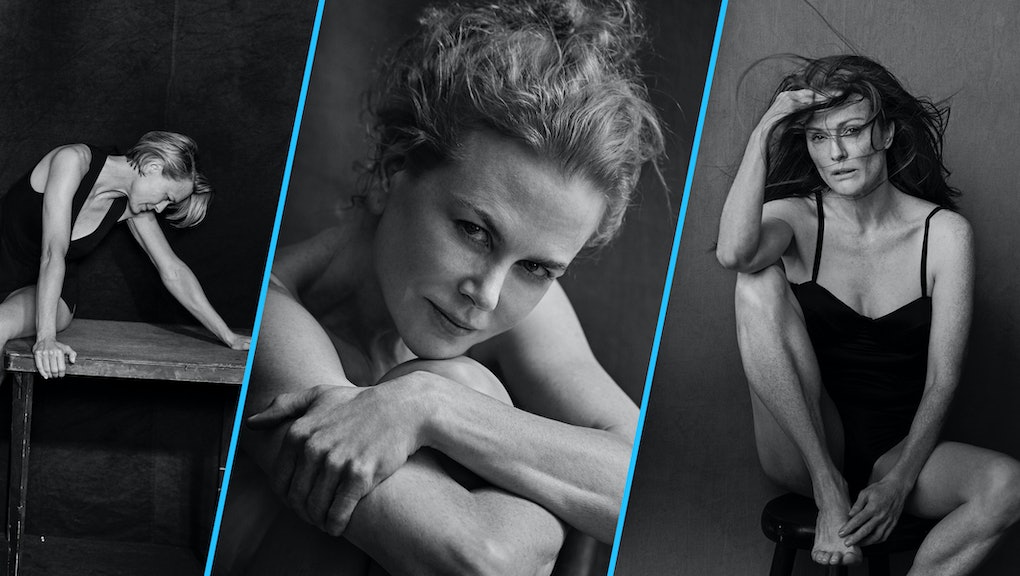 Pirelli calendar 2017 may be an anti-Photoshop statement, but there's just 1 problem

For the past 50 years, the Pirelli calendar has stood as the fashion industry's annual celebration of female beauty, with sensuous, glossy images of top models, celebrities and notable figures in various stages of undress.

But over the past year in particular, the Cal, as it's known, has seen a shift. For the 2016 Pirelli calendar, photographer Annie Leibovitz focused on women with spectacular careers, from Serena Williams to Patti Smith and Yoko Ono, rather than women with spectacular measurements. And now for the 2017 Pirelli calendar, which was revealed on Tuesday, it's all about celebrating raw, real beauty without any face or body retouching.

In a press release, the calendar's photographer, Peter Lindbergh, explained that he wanted "to create a calendar not around perfect bodies, but on sensitivity and emotion, stripping down to the very soul of the sitters, who thus become more nude than naked."

"In a time when women are represented in the media and everywhere else, as ambassadors of perfection and youth, I thought it was important to remind everyone that there is a different beauty, more real and truthful and not manipulated by commercial or any other interests, a beauty which speaks about individuality, courage to be yourself and your own private sensibility," Lindbergh said in the release.

And indeed, as seen in the released images, the women's faces show lines and dimples and wrinkles. Their skin has creases. For a calendar that has so long now built a reputation on smooth and supple bodies, it's indeed refreshing.

But there's just one thing. Though this is possibly the first calendar sans airbrushing, it's also one that appears to include no plus-size women, or women above a size 8, it seems. For this supposed celebration of real, raw, un-retouched, true beauty, Pirelli decided to leave women above a certain size in the dust.

Yes, the calendar does include both women of color (though just a few) and women 50 and older, like Robin Wright and Charlotte Rampling, but leaving out women above a size 8 or 10 or 12 in this display of beauty makes the project feel less genuine.

That's especially true because even before the Pirelli calendar started getting its own woke makeover, it did feature plus-size women, like model Candice Huffine, who posed almost entirely nude for the 2014 issue. Last year, Serena Williams, a strong, fit and curvy woman, was a proud centerpiece, as well as Amy Schumer, who showed off the rolls on her belly in her shot.

But this time, there's no curvaceous women in sight. What that says is that although plus-size women in various stages of undress are Pirelli-appropriate, an un-retouched plus-size woman isn't yet. In order to be acceptable without airbrushing, you've got to tick the boxes of "thin" and "conventionally pretty" first.

So, although the images remain stunning and are indeed a testament to how beautiful women are regardless of if they've been manipulated by a computer, Pirelli seems to have missed the entire point of inclusive beauty.

You can watch the calendar's official video below: