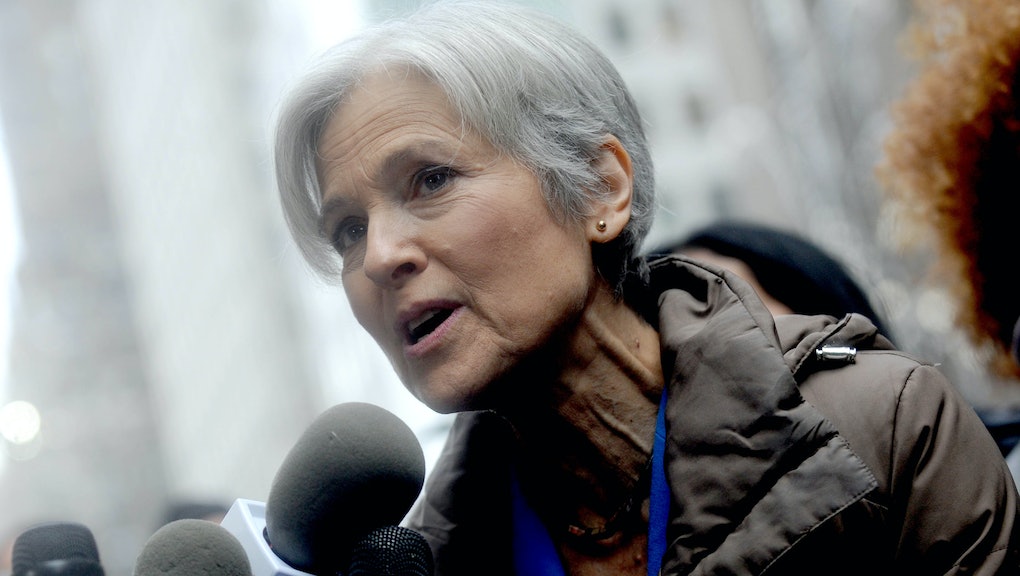 Jill Stein's recounts are in trouble: Here's what's happening in all 3 states

Early Friday, ABC reported that a federal judge is set to hold a hearing on stopping the presidential recount in Wisconsin. The Michigan recount has been effectively halted on the basis that former Green Party presidential candidate Jill Stein — who filed for recounts in three states — failed to show an "entitlement" to the recount. Meanwhile, efforts in Pennsylvania were escalated from state to federal courts in order to allow recount efforts to proceed after a state judge ordered a $1 million bond.

Michigan — Stein is not "aggrieved"

A federal judge in Michigan ruled Wednesday that Stein had no grounds to call for a recount because she was not an "aggrieved candidate" as defined by Michigan state law. U.S. District Court Judge Mark Goldsmith, who initially issued an order for the Michigan recount to move forward, also said that Stein's claims of vote tampering were speculative and "not actual injury."

Stein called the Michigan ruling "disheartening" and in a statement, her attorneys said they were "deeply disappointed" but that they "are not backing down from this fight."

As reported by the Detroit Free Press, Stein is appealing the order, which dissolves a previous temporary restraining order against the Board of Election that allowed the recount to continue. Stein will take her case to the Michigan Supreme Court.

Pennsylvania — recount stalling in the courts

Over the past several days, it has become clear that the barriers to verifying the vote in Pennsylvania are so pervasive and that the state court system is so ill-equipped to address this problem that we must seek federal court intervention.  As a result, on Monday the Stein campaign will escalate our campaign in Pennsylvania and file for emergency relief in federal court, demanding a statewide recount on constitutional grounds.

In Pennsylvania, a hearing is scheduled for today in federal court to address Stein's recount request. The hearing comes after the GOP warned that the case for the recount threatens Pennsylvania's ability to certify its election results before the Dec. 13 deadline, according to the Associated Press. On Sunday, Stein stated she would escalate recount efforts — not drop them — in an effort to assure the integrity of the voting system.

Even if the Wisconsin recount is able to continue — it's currently about 70% complete — Hillary Clinton doesn't seem to be gaining much ground on President-elect Donald Trump. On Thursday, the AP reported Clinton had only picked up 82 additional votes in a state that Trump won by more than 22,000 votes.