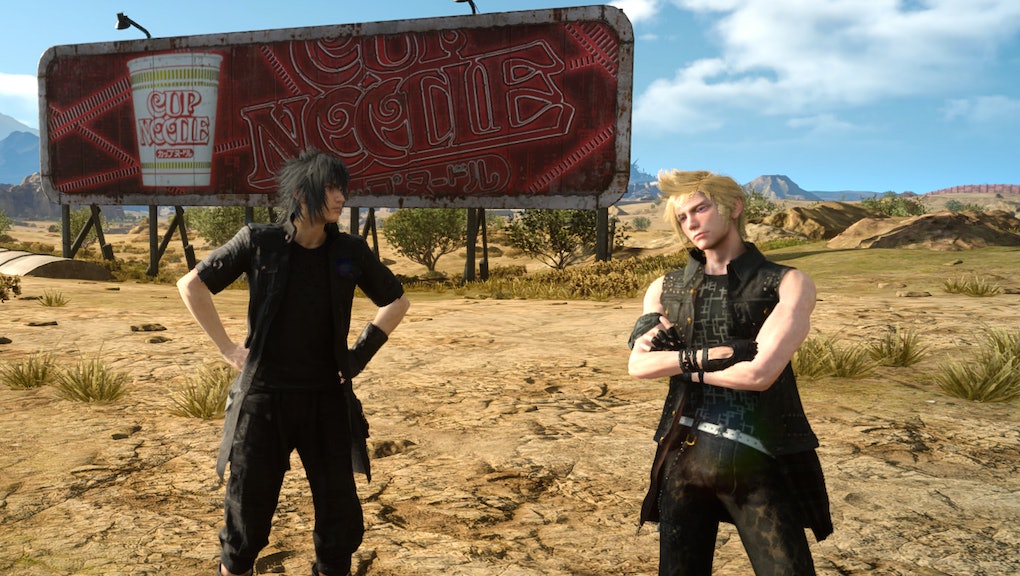 Final Fantasy 15, now available for PS4 and Xbox One, has a whole storyline about an oppressive militaristic regime and lovers from far-flung worlds — but really, it's all about a group of four ostensibly hetero bros having an adventure on the open road. Say hello to Ignis, Noctis, Prompto and Gladiolus.

You might have noticed that there are no women in the above picture. In fact, it's the first Final Fantasy game not to feature female heroes in its playable central cast. The first major female character you meet is Cindy, a hypersexualized mechanic with an overwrought southern accent, who looks like this:

Undeterred by Final Fantasy 15's focus on straight white men, however, fans are already taking matters into their own hands and re-imagining its central cast of canonically straight characters in all sorts of new — and, usually, super-gay — ways.

Long before Final Fantasy 15, the LGBTQ fanbase of Final Fantasy already had a fondness for extracting gay subtext from the series: A popular post circulating on Tumblr, for example, imagines the Shiva summon from Final Fantasy 10 as a sort of sassy, overly dramatic diva responsible for awakening a dormant gayness within a generation of young players.

However, the release of Final Fantasy 15 seems to have sparked a new trend across the internet: A "ship" — an imagined romantic pairing — called "Promptis," the coupling of Noctis (the prince of Eos and the game's main character) and Prompto (his closest childhood friend).

The Noctis/Prompto pairing makes a certain amount of sense. The two have an organic history based on friendship and loyalty — Gladiolus and Ignis, despite being brawnier and more masculine, have more of a mentor/mentee dynamic with Noctis. Gladiolus also sports an ugly mullet and Ignis is just kind of a buzzkill. So, Prompto it is.

And yes, in the GIFs above, that's literal gameplay where you can see Noctis catching Prompto as he staggers backward in battle, capping off the bromantic moment with a nice tousle of his hair. We see you, Noctis.

Though same-sex shipping in video games is nothing new — it happens in Pokémon and Overwatch, too — the gay shipping in the Final Fantasy 15 fandom is particularly subversive.

In interviews leading up to the game's release, director Hajime Tabata said the game's all-male central cast allowed them to tell a story about platonic male friendship, in which its characters care for each other and confide in one another — but, you know, in a strictly heterosexual way, dude.

"The world might be ready to see the curtain lifted on what boys do when girls aren't around, when they come out of the tent all prim and proper," Tabata said in an interview with GameSpot. "That's kind of the idea behind it. ... We think, male or female player, that everyone will feel a certain connection and bond with the four characters."

Though the idea of using an all-male cast to undermine the toxic masculinity that pervades the gaming world is compelling, Tabata's comments have been rightfully criticized for reinforcing sexist, essentialist notions about gender and the potential for friendship between men and women.

So, whether conscious or not, fans pushing the aggressively heterosexual cast of Final Fantasy XV a little further into all-out homosexuality is a wonderful way to make the game much more counter-cultural than it was intended to be.

And, you know, you can already dress the dudes of Final Fantasy XV in different outfits within the game itself and save the photographs Prompto takes of you throughout the game. So the game is doing a lot of the gay legwork on its own.

Anyway, here's some more of the best Prompto art from Tumblr:

If you're ready to get your bromance on, you'll want to read up on all of Mic's Final Fantasy coverage, including a review roundup of Final Fantasy 15, Conan O'Brien's reaction to the game on his show, its psychedelic "Omen" trailer and information about the other big Final Fantasy game out this year: World of Final Fantasy.