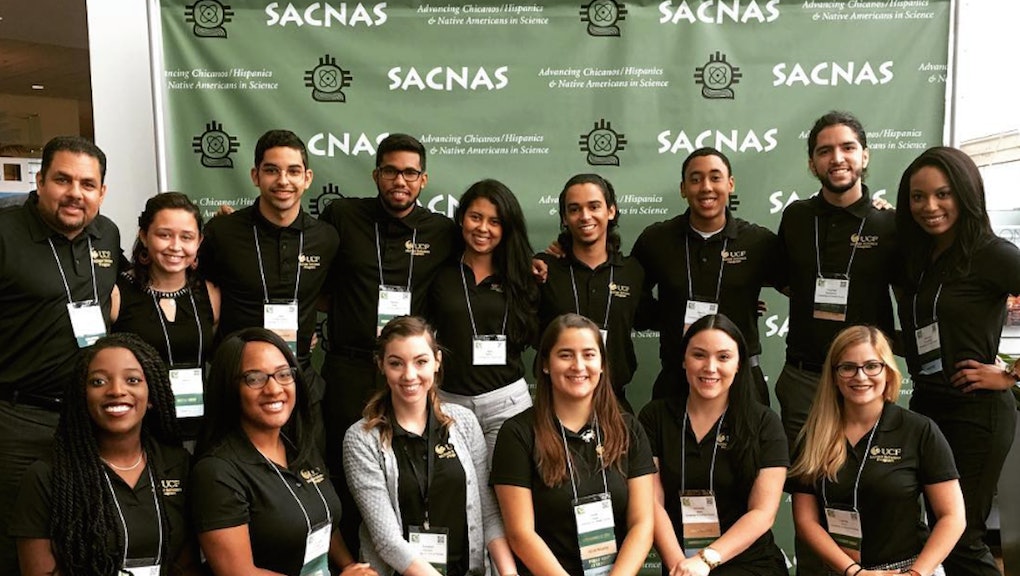 This program is connecting the diverse future leaders in STEM industries.

Over the past decade, the uphill battle for increasing diversity in STEM has been incredibly steep.

According to the coalition Change the Equation, the landscape for women and minorities in STEM jobs has barely improved since 2001, despite the national population becoming more diverse. While more than half of the U.S. population are women, only around a quarter of STEM workers are. The disproportionality is even worse in minority communities. In 2010, only 1% of black college American freshmen were enrolled in engineering programs.

"Culture sends these big signals about what it is to be a scientist or what it is to be an engineer, and the image is usually white and male," Eben Lindsey, senior program manager at the Society for Advancement of Chicanos/Hispanics and Native Americans in STEM (SACNAS), said in a phone interview.

This year, the National Science Foundation initiated a program to boost diversity across STEM fields. Known as ASSIST, the program has awarded more than $745,000 to establish networks between the largest seven STEM diversity organizations over the next four years and facilitate meaningful, long-lasting relationships among STEM scholars and professionals.

These annual conferences are one of the few opportunities for those underrepresented in STEM to meet those who have faced similar challenges. Last month, 12,000 women arrived in Philadelphia for the Society of Women Engineers (SWE) national conference, 50 of which were sent through the ASSIST program.

Deb Hall, a program chair at Valencia College in Florida, was one of the women flown out to the SWE conference under the ASSIST program. It was her first experience meeting female peers in similar positions facing similar challenges. "There's all these amazing women in various stages in their career," Hall said in a phone interview.

That's exactly the point, according to James Moore, who manages the NSF Broadening Participation in Engineering program. Women and minorities who do end up in STEM fields ultimately drop out because the lack of representation can be challenging and isolating. Being able to introduce this group of engineering professionals to other STEM scholars helps to create new peer-mentor relationships, and even relationships between mentors to relieve the feeling of isolation.

"What was interesting was the commonality," said Hall about the SWE conference. "It doesn't matter what type of university or college you teach at, there's certain things ... only they could understand. They're invigorated just by going and seeing that they're not in the minority — they're in the majority."

Hall says that kind of validation can help women and minorities in STEM to overcome their sense of isolation and "just stay the course." She hopes to be able to reconnect and stay in touch with her cohort from this year, and looks forward to the day when the program becomes it's own standalone conference.

"[It's a really] exciting exchange of ideas and motivations and inspirations at many levels," she said.

An economic imperative. "This project is kind of monumental," said NSF's Moore in a phone interview. "It's a rarity that seven of the largest diversity-oriented engineering-focused organizations have come together around one initiative with the specific purpose to diversify the profession."

Thanks to ASSIST, the organizations now meet regularly to evaluate their programs and share best practices on "what's working [and] what's not working," SWE Deputy Executive Director & Chief Learning Officer Peter Finn said in an interview.

The program's emphasis on professional development among assistant professors, post-doctoral students and young professionals distinguishes it from the many diversity programs that focus on encouraging young people to enter STEM fields. While the K-12 area is important for exposure, Moore acknowledged, "the return on the advancement is sometimes not as instantaneous as it is when you do it on other levels of the continuum."

By focusing on the leadership level, Moore said, "it's helping these organizations build capacity and build a similar program to sustain life after NSF funding."

Ultimately, he said, the future of science, technology and engineering depends on sustaining ASSIST's and other programs' efforts to diversify the fields.

"It's not just a moral thing to do," Moore said. "It's an economic imperative if the country wants to maintain its global edge and remain a steadfast player."