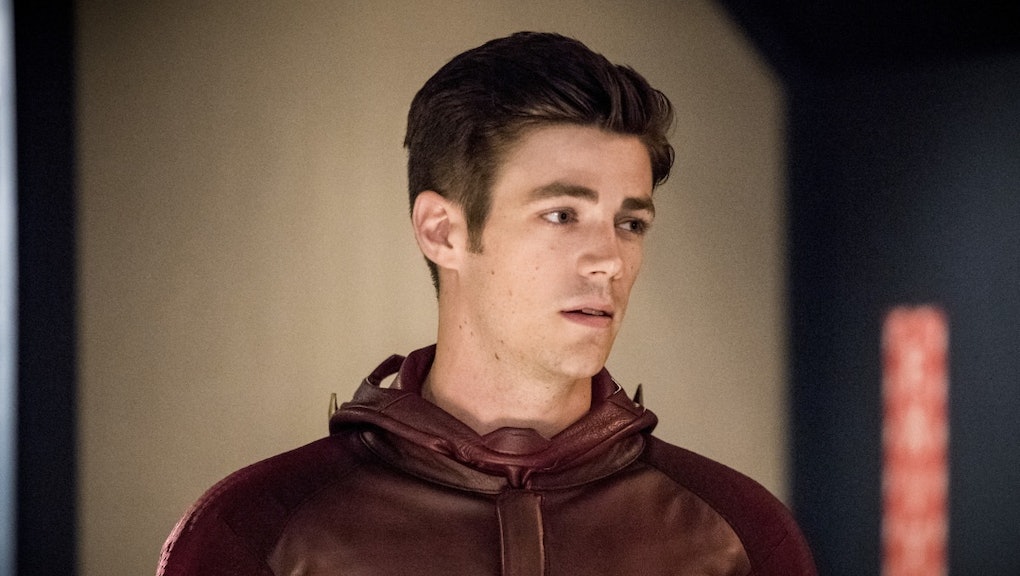 'The Flash' season 3, episode 8 concludes with a new twist for DC 'Invasion' Crossover

It's finally here. The CW and executive producer Greg Berlanti just brought all four of their connected DC universe shows into one mega mashup. Supergirl kicked off the "Invasion!" event on Monday night. The Flash continued Tuesday night with part two during season three, episode eight. Earth is under attack from a group of malicious aliens known as the Dominators and it's up to the Flash, Supergirl, Arrow and the Legends of Tomorrow to stop them.

"Invasion!" part two starts out like a normal episode of The Flash. The crew argue over Wally's new powers, HR reveals his plans to make S.T.A.R. Labs into a tourist attraction — but then they're interrupted by a meteor headed for the city. Barry runs to meet it and finds out it's not a meteor but an alien ship full of aliens.

The aliens are known as the Dominators. As Lyla Michaels tells Barry and the team, the Dominators first came to Earth in the 1950s on a reconnaissance mission. They massacred a squad of U.S. soldiers and quickly left. Now they're back, and while it appears as if they're not hostile, we later learn they're here for war — and intend to win. Their first move is to kidnap the president of the United States.

Barry knows the only way to defeat an alien force is to get some help, so he enlists Green Arrow, Supergirl and the Legends of Tomorrow. The full team is massive and includes Green Arrow, Spartan, Speedy and Felicity from Team Arrow; the Atom, White Canary, Firestorm (both Jefferson Jackson and Professor Stein) and Heat Wave from the Legends; Barry, Iris, Caitlyn, Cisco and Wally from Team Flash; and Supergirl aka Kara Danvers. Eat your heart out, Avengers.

As the team trains for their big battle, Professor Stein and Atom reveal to Barry and Oliver a mysterious audio recording they received. It's from Barry Allen 40 years in the future. In the clip, Barry warns Stein not to trust him because he messed up the timelines. Barry is then forced to admit the truth about Flashpoint to everyone — and they aren't too thrilled about it. This played nicely into Barry's guilt as an overall theme this season.

The climactic battle is wildly enthralling. Green Arrow fights White Canary in some well choreographed hand-to-hand combat. Barry throws lightning to take out Firestorm and Atom. Even Wally shows up to help Flash and Green Arrow, much to Joe and Iris' dismay. Barry is finally able to stop the mind control by tricking Supergirl into destroying the device that's sending out the mind control signal.

"Invasion!" part two does a good job of balancing the crossover story while keeping an eye on what's happening on The Flash. For an episode that needs to deliver a lot of exposition and divide time between a ton of characters, it devotes a good chunk of screen time to Cisco and his frustration with Barry. It also keeps the Wally storyline in the air. Surprisingly, Wally asks HR to train him and by the episode's end, HR agrees. It also seems like the warning from future Barry could have deep ramifications throughout the series. Keep an eye on that one.

Though they stopped themselves from killing each other, The CW's de-facto Justice League isn't out of the woods yet. There are still two more episodes of the "Invasion!" crossover event! At the end of the episode, after everyone agrees to work with Barry, half of the Legends and Green Arrow are abducted by the Dominators. What happens next? We'll see when "Invasion!" part three airs on Arrow Wednesday, Nov. 30 at 8 p.m. Eastern on the CW.