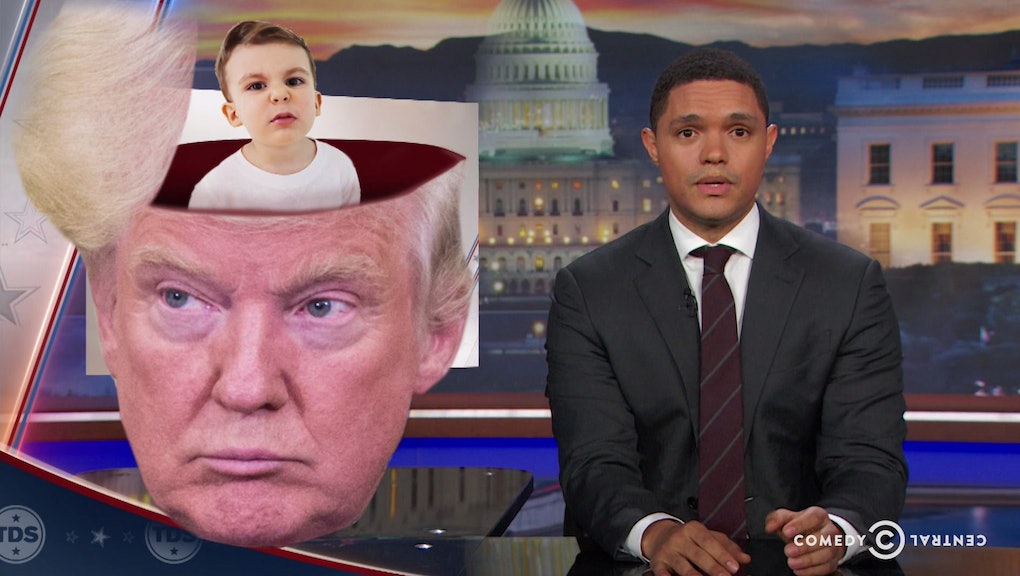 Trevor Noah believes the media should treat Trump like a toddler, which makes sense

America is at a point where President-elect Donald Trump is more comparable to a toddler than a traditional politician. As Trevor Noah explained on Tuesday's episode of The Daily Show, Trump's incessant tweeting without any basis for his claims — like the notion that there were millions of Americans who voted in this year's election illegally — is akin to a toddler that doesn't want to carry an argument for the absurd things they say.

"President-elect Trump might have the mind of a toddler," Noah explains. "They like building things, they love attention, [they're] always grabbing things they're not supposed to."

But this becomes a problem for the media, Noah notes, because so much time has to be spent explaining why Trump's claims are false. For example, the host cites a CNN lower-third that corrected Donald Trump's claim that President Barack Obama was the "founder of ISIS."

Noah notes that the cycle between Trump's false claims and the media's reaction to them won't affect the president-elect. He explains that Trump could tweet out that "goblins are faster than unicorns," and the media will spend the next 24 hours of the news cycle with substantive debates and analysis. "CNN would bring out a hologram unicorn," he adds.

So where does the media go from here? Noah returns to the toddler comparison for the best way to deal with Trump, and it starts with the news cycle learning to adapt to Trump's false claims.

"You don't argue with a toddler if you want to win," he says. "Don't amplify the toddler's voice, because you'll just get trapped in the toddler's world. Rather, just keep asking the toddler to elaborate. Because logic is the downfall of every toddler."

Not only would this, in theory, stop Trump in his tracks, it would bring the focus back on more important issues regarding the president-elect, such as the troubling appointments to his cabinet.

"So news, report on the stuff that actually affects the real world," Noah concludes. "And then if Donald Trump tweets some crazy claim from his universe, just tweet him back, 'Hey man, pics or it didn't happen.'"

You can watch Noah's segment on Trump here.