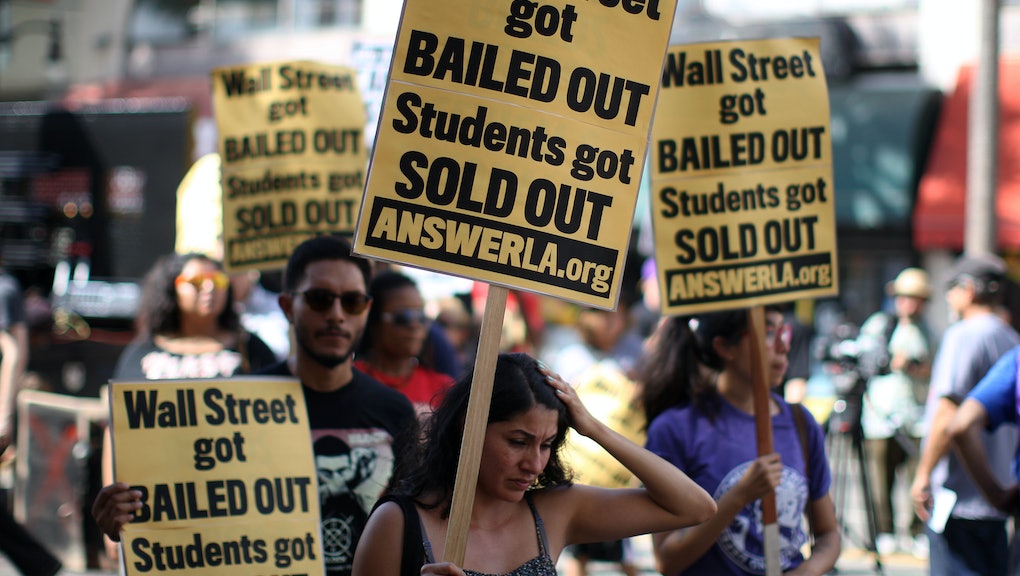 At least $108 billion of student debt will likely be forgiven by the federal government in coming years, according to a report Wednesday by the Government Accountability Office.

That's a huge bill for taxpayers, and — because of underestimations of inflation and new participants, according to the study — the costs are far over budget: "more than double what was originally expected for loans made in fiscal years 2009 through 2016," the GAO reports.

"We're very concerned about the Department of Education's forecasting and we have six recommendations for them on how to make it reliable," Barbara Bovbjerg, the GAO's managing director for Education, Workforce and Income Security, said to Mic.

But while the new estimate is certainly considerable, it's dwarfed by the total national student loan debt, which looms at about $1.4 trillion — growing by thousands of dollars every second.

If you're a student debtor worried more about your own budget than the federal government's, that's a scary number.

Furthermore, because of stipulations in forgiveness plans, even those students who receive forgiveness may not be completely off the hook: Many still get stuck with big tax bills.

Here's who needs to worry about tax: If you get public service loan forgiveness — which, as the name suggests, involves you working in public service — then you don't have to fret. But if you get forgiveness from what's simply an income-driven repayment plan, or IDR, it's a different story.

IDR plans, which have been expanded and popularized by the Obama administration, limit repayments to a proportion — in some cases just 10% — of a borrower's discretionary income.

After between 10 to 25 years of repayments the remaining loan is then ostensibly forgiven — but you will be weighed down with a hefty tax bill for the amount of debt canceled. Worse still, your family could end up inheriting that tax debt if you die prematurely.

The debt accumulates interest while it's being paid off, so you could conceivably end up getting taxed on an amount of money almost double the size of the original loan, student aid policy analyst Mark Kantrowitz said to Mic.

"They're substituting a tax debt for student debt," Kantrowitz said. "There is a rule that if you are insolvent — if your total debt exceeds your total assets — you can get forgiveness [on these taxes], but it's not guaranteed and not many people know about it."

What would help in general, he said, is a simpler process.

"The student loan program right now is far too complicated," Kantrowitz said. "There are so many versions of repayment plans, you get 'deer in headlights' syndrome because there are too many choices. There should just be two or three choices, like a standard 10-year repayment plan and one income-driven repayment plan."

Tranchau "Kris" Nguyen, assistant director to GAO's EWIS who also worked on the report, told Mic the DOE has historically taken more than 80% of the GAO's recommendations, so she believes the flawed forecasts about forgiveness costs will be improved.

The DOE has already started implementing one of the recommendations, according to Nguyen: "More transparency ... can help policymakers," she said.

Alas, even if the government works out its cost projection issues, that doesn't help students.

"Republicans have a majority in Congress and they tend to dislike forgiveness, so in the current environment it's extremely unlikely [repayment plans] will become more forgiving," Kantrowitz said.