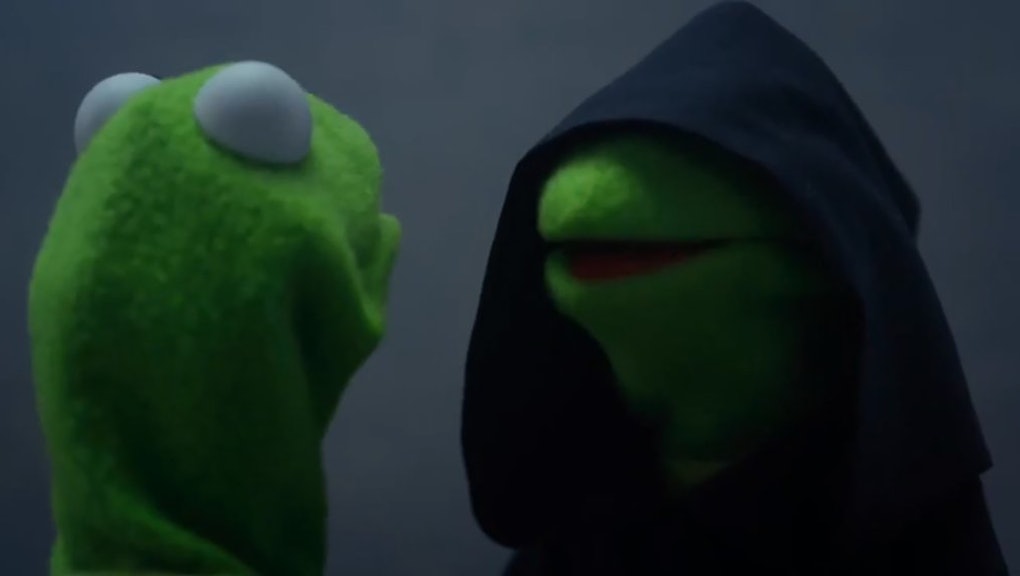 Within each of us lives a constant battle between the forces of light and the forces of darkness, good and evil, our best impulses struggling against our worst desires — and no piece of cultural art better captures this battle than the evil Kermit meme.

In the past few weeks it's been hard to avoid the meme, in which regular, unhooded Kermit represents the desire to do the right, good thing, and evil Kermit plays devil's advocate.

The now-ubiquitous meme originally comes from a scene in 2014's Muppets Most Wanted, in which Kermit the frog faces his evil, hooded doppelgänger, Constantine, whose appearance is a cinematic nod to Star Wars' Sith Lords.

The "evil Kermit" entry on KnowYourMeme.com traces the origins of the Kermit vs. evil Kermit meme to a Nov. 6 viral tweet about the evil urge to steal cute dogs. The tweet was from an account belonging 19-year-old Anya Sudarkina, the genius behind the "me / also me" internal dialogue that accompanies the image.

In an interview with Verge, Sudarkina discussed her viral success, saying, "I think this meme touched so many hearts because everybody could bond over scapegoating a frog in a cloak for their bad decisions."

Like all viral phenomena, the meme spread quickly — and now it's almost everywhere you look on social media. The Guardian called it "the perfect meme for terrible times."

Like all viral memes, "evil Kermit" will probably grow and evolve before brands start using it to sell stuff online, the official point at which all memes become uncool and die. But future Kermit memes may be on the horizon — you just can't keep a good #TeaLizard down.