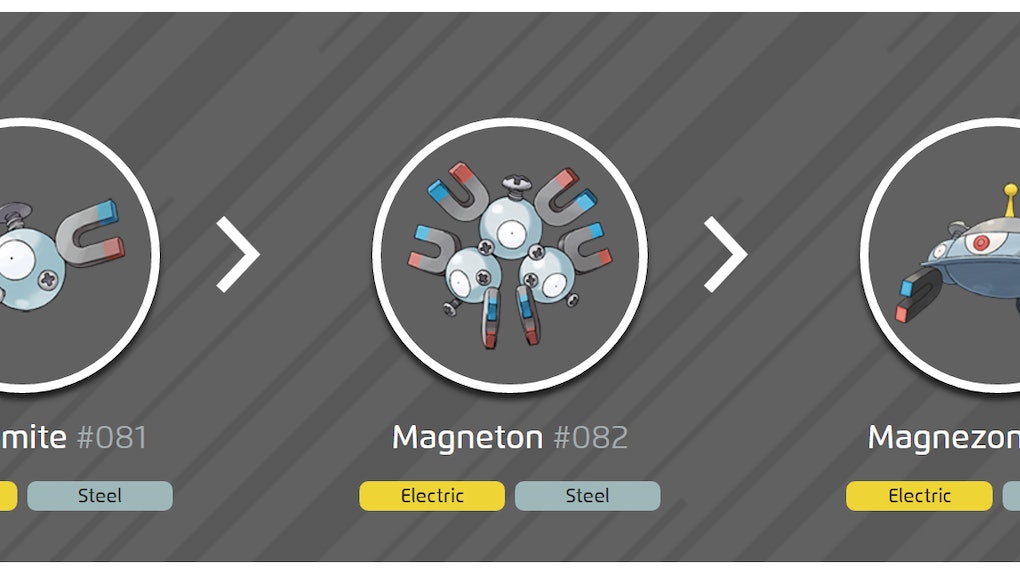 Are you dying to cradle a Magnezone in your arms in Pokémon Sun and Moon? It's so damn cute, but you'll have to evolve your Magneton first.

Filling out your Pokédex in a Pokémon game can be hard work. Sometimes you just want a surefire way to get your hands on a specific species to catch and file away. When it comes to a fan favorite like Magnemite, catching all its evolutions holds nostalgic appeal. So it's no wonder that Pokémon fans are flipping out over Magnezone, Magnemite's UFO-shaped evolution.

Even casual Pokémon players are probably familiar with Magnemite, the floating, Steel-type Pokémon festooned with magnets.

Magnemite, like the other Pokémon currently featured in Pokémon Go, is drawn from the first generation of Pokémon that originally appeared in Pokémon Red and Blue in 1996 (the game was released in North America two years later). Magnemite's place in the original 151 means players have a soft spot in their hearts for it and, naturally, all its evolutions.

Magneton is the Magnemite evolution that all Pokémon players love

Pokémon fans should also be familiar with Magneton, the evolution of Magnemite that looks like three of the little fellas stuck together — you know, because they're magnets.

Magneton was the only evolution for years. Then, the introduction of Magnezone finally gave Pokémon trainers somewhere new to go with this cool-looking Pokémon.

How to evolve Magneton into Magnezone in Pokémon Sun and Moon

YouTuber Turdbundy provides a walk-through on a surefire method to help Pokémon Sun and Moon players get their Magnezone sooner rather than later. To complete the evolution, you have to have access to Poni Island and travel to Vast Poni Canyon. Then enter a cave at the end of the canyon and level up your Magneton in the next area. That's it.

If you're serious about 'Pokémon Sun and Moon,' you'll want to read up so you can be the very best. Check out our guides for picking the right starter, 'Pokémon Sun and Moon' cheats, using a damage calculator, how to catch the new legendary Pokémon, how to get Munchlax, how to customize your character, how to trade, how to find all the evolution stones, how to use QR codes, all the Team Skull passwords, which Pokémon to catch early on and picking between 'Pokémon Sun' and 'Pokémon Moon.'