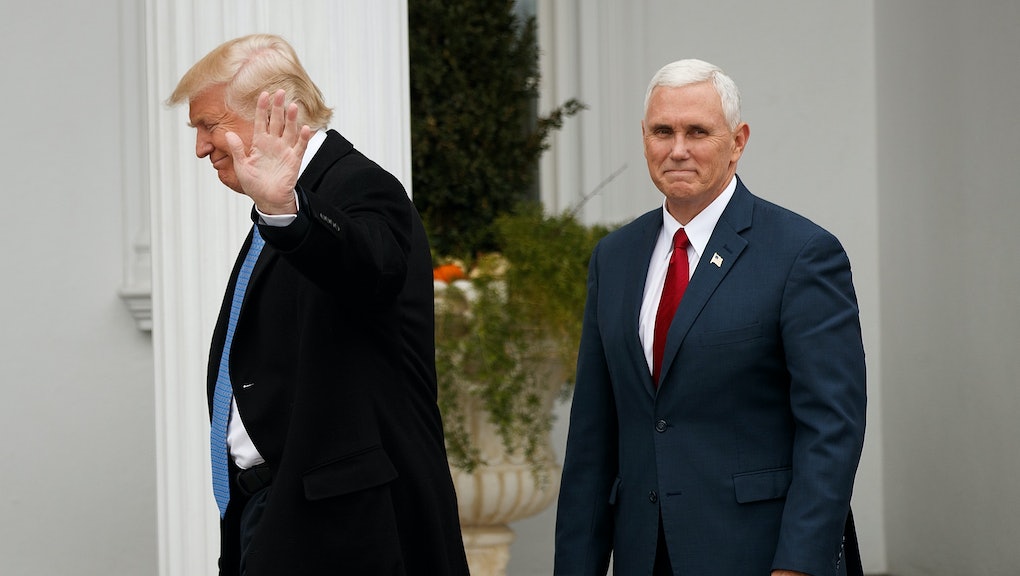 President-elect Donald Trump and heating and refrigeration company Carrier touted one of the first major victories of Trump's transition in tweets Tuesday night, announcing Carrier would keep "close to 1,000" factory jobs at an Indianapolis plant that was originally scheduled to be shuttered and moved to Mexico.

Allies of the president-elect were quick to point at the announcement as an early sign of success by the deal-making developer.

The company, owned by United Technologies, emerged as an archetype for Trump country after the New York Times profiled the plant's hopeful workers celebrating the president-elect's victory.

That might be one reason the first wave of media coverage of the Carrier announcement was breathlessly positive: The Times print edition, for example, led with the headline: "Trump Takes On a Big Business, And 1,000 Jobs Stay in Indiana."

The New York Times did appear to dial back its praise for Trump in the story's online edition — which had a less exuberant headline: "Trump to Announce Carrier Plant Will Keep Jobs in U.S." — but the story still makes Trump out to be a "different kind of Republican, willing to take on big business."

Even if the move is a symbolic victory for Trump — and a very real victory for Carrier's workers — there are important caveats that a too-simplistic narrative leaves out. The story itself is a sign of how journalists must adapt to President-elect Trump's style of using what are arguably PR stunts to distract from troublesome policy or a lack of real fixes.

For one, it appears that Vice President-elect Mike Pence helped spearhead the deal, according to CNBC — and that's actually not a particularly unusual or remarkable thing for a sitting governor to do, as Mother Jones noted.

State officials often lobby companies with tax incentives to keep jobs in the state, and most states offer tax credits expressly for this purpose, in fact.

Alan Murray at Fortune reported Wednesday that Trump called United Technologies CEO Greg Hayes and offered the company $700,000 a year in state tax incentives, or $7 million over the next ten years.

In response to these revelations, Vermont Senator Bernie Sanders wrote a Thursday column for the Washington Post in which he warned that Trump has just set a dangerous precedent.

"Instead of a damn tax, the company will be rewarded with a damn tax cut... In essence, United Technologies took Trump hostage and won. And that should send a shock wave of fear through all workers across the country. Trump has endangered the jobs of workers who were previously safe in the United States. Why? Because he has signaled to every corporation in America that they can threaten to offshore jobs in exchange for business-friendly tax benefits and incentives. Even corporations that weren't thinking of offshoring jobs will most probably be re-evaluating their stance this morning."

Critics have furthermore pointed out that interfering in the free market can be costly to taxpayers and is traditionally something conservatives frown upon — and that celebration is unwarranted given that the number of jobs being saved is so relatively small.

As Nobel Prize-winning economist Paul Krugman points out, even if Trump were to make a "Carrier-style deal" each week for the entirety of his term, by the end he will have brought back less than 5% of all manufacturing jobs lost over the last decade and a half.

University of Michigan economist Justin Wolfers points out that saving 1,000 jobs is a drop in the bucket compared with the tens of thousands of layoffs in the United States each day.

Besides, Wolfers argues, Trump may be setting himself up for a dangerous precedent: Why would any company remain in the U.S. — with its relatively expensive labor costs — without trying to get a tailored, Trump-arranged deal?

Finally, Carrier and United Technologies will still send about 1,300 jobs to Mexico.