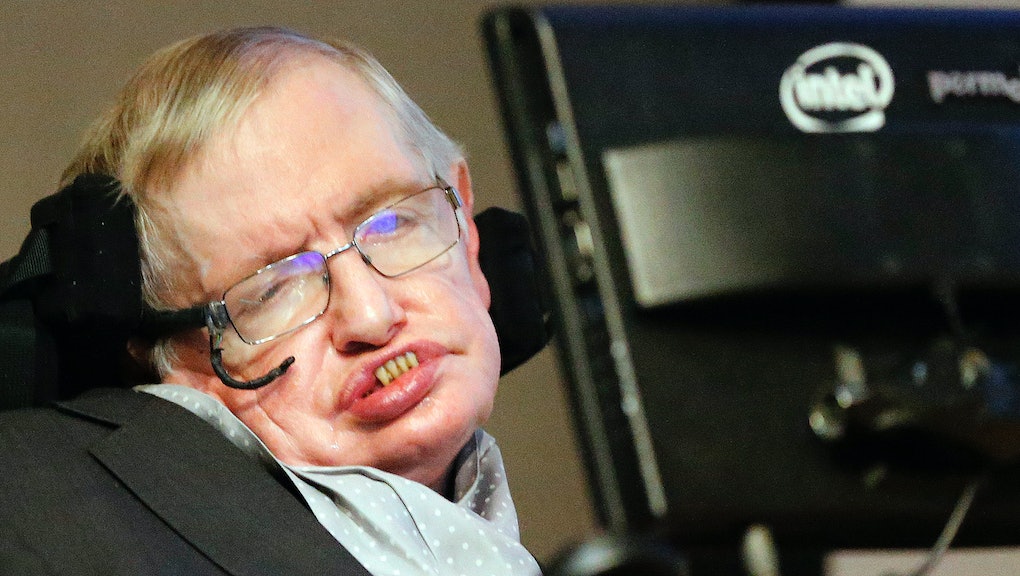 Earlier in November, theoretical physicist Stephen Hawking said that humans only have about 1,000 years remaining on earth: Because of the way we use up the planet's resources, we'll have to find a new place to live come year 3016, otherwise we'll be, well, kaput.

In a recent ad for GEN-PEP, a Swedish nonprofit organization, Hawking delivers some more grim news: that humans are eating and sitting themselves to death.

"Today too many people die from complications related to overweight and obesity," he said. "We eat too much and move too little."

Indeed, in the U.S. alone, more than two in three adults are considered overweight or obese, according to the National Institute of Diabetes and Digestive and Kidneys Diseases. Being overweight greatly increases a person's risk for heart disease, liver disease, some types of cancers and several other health problems that can, ultimately, shorten a person's lifespan.

"Fortunately, the solution is simple: More physical activity and change in diet. It's not rocket science," Hawking goes on in the PSA. While eating more healthful food and increasing one's activity can both contribute to longevity and a healthier lifestyle, for many, making these small changes is easier said than done.

So, maybe losing weight is closer to rocket science than Hawking lets on. Being overweight has more to do with complex environmental and biological factors than a simple lack of willpower to make small lifestyle changes.

Time and time again, willpower has proven to offer very little — except for failure — in the weight loss process. And broadcasting the statement that we need to lose weight will hardly be the catalyst for any "ah-ha" moment in overweight adults. About 45 million Americans attempt to diet every year, the Boston Medical Center reported, and they spend about $33 million on weight loss products on an annual basis.

While there are tons of healthy foods on the market, much of America's food supply doesn't make it any easier to shed pounds. According to the U.S. Department of Agriculture, the average number of calories available to Americans has increased by 25% between 1970 and 2010, Bloomberg reported.

Eating three meals a day has been the norm for most Americans, but the types of foods we eat at these meals have radically changed over time. Specifically, foods have surged in added sugar content, according to the USDA. Sugar provides nutrient-void calories that don't satisfy the appetite, leading a person to overeat.

Of course, sugar is just one element that has contributed to the country's weight epidemic, but it's one that's hard to run from, especially when large corporations are spending millions to keep sugar's dangers under wraps.

Yes, Hawking's sentiments are a good reminder that we really need to think about what we put in our bodies, and how we move. But a more concrete solution from arguably the smartest person on the planet could be a bit more helpful.