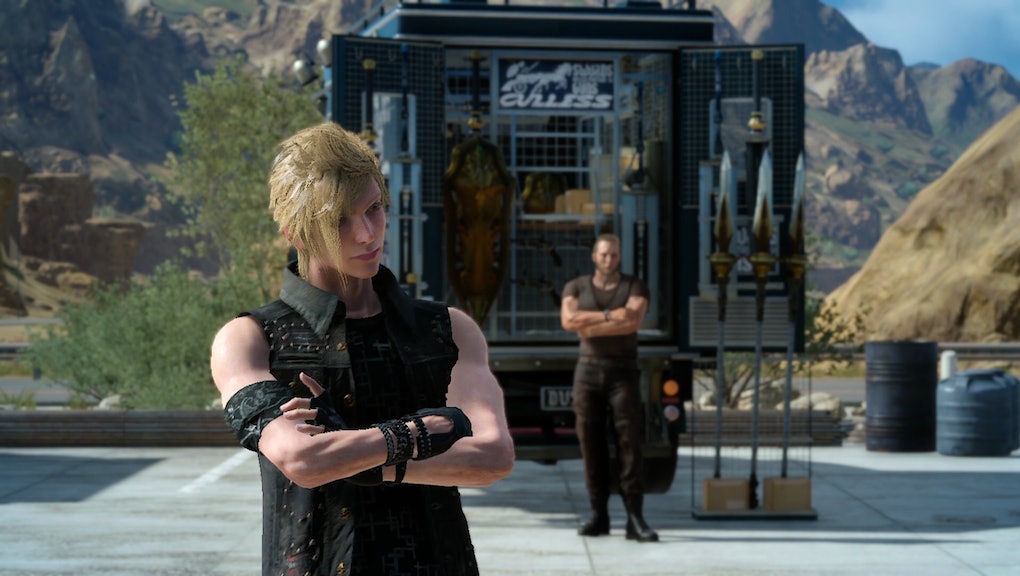 Between combat, driving, spell crafting, ascension and gear, there are tons of systems Final Fantasy 15 throws at you right from the get-go. That can make it difficult to understand each one fully, but don't worry, I'm here to be your guide.

Here are some of my favorite tips and tricks I've discovered in my time with Final Fantasy 15 so far.

If you didn't know, Noctis can sprint! The easiest way to do this is just to click the left thumbstick, causing Noctis to sprint until his stamina runs out. Usually, you have to wait for his stamina to regenerate before sprinting again, but there's a little-known trick that will let you sprint forever: When you're about to run out of stamina and stop sprinting, Noctis will stagger and start to throw his head back. If you click the left thumbstick at this exact moment, he'll flash green and continue to sprint again. It looks like this:

You can also just keep an eye on the stamina bar and click the thumbstick when it empties, but I don't like to have any more HUD elements enabled than I need to, so I rely solely on Noctis' visual cues instead.

For example, when the prompt pops up that indicates you should parry an incoming attack, hold the block button down rather than tap it and you should automatically block it.

Additionally, to trigger combos, holding down the attack button and tilting the left thumbstick will be more effective than trying to precisely time your button presses.

Essentially, don't be fooled into thinking that twitchy timing is always the solution. Approach combat calmly and methodically.

2. Don't forget about your allies' abilities: The best part of Final Fantasy 15's combat are the cool abilities your allies can perform in battle. These are called "techniques."

You'll know when you can perform them based on the green "tech bar" that fills up on the left-hand side of the screen throughout battle. Some eat up one chunk of that bar, but others take two or three. Make sure to use these abilities pretty liberally, because they can drastically alter the tide of a fight.

There's one technique in particular you should unlock from the "ascension" menu as soon as possible: Ignis' ability "Regroup." It calls everyone together and heals the whole party by a significant amount. Rather than relying solely on potions, you can use Regroup over and over. Additionally, it only costs eight ability points to unlock. So get it as soon as possible and assign it to Ignis through the "gear" menu.

3. Craft spells and use them in battle as much as possible: Magic in Final Fantasy 15 is a really powerful tool. Since spells are treated like consumable items rather than unlimited abilities, you might be tempted to use them carefully— don't. You can replenish your magic resources at the little resource pools adjacent to every campsite in the game, so you probably don't have to worry about running out.

I've regularly bested powerful enemies by crafting a particularly nasty spell, so don't be afraid to use them. You'll start the game with just one magic flask, but you'll earn more as you explore and complete quests.

One final note about spell crafting: Even though you can use both fire and ice when you're crafting a spell, that won't create a hybridized fire/ice spell. A second or third element will simply help you increase its potency. You can also increase the potency of a spell by using several copies of a single item as a catalyst. Catalysts will also add secondary effects, like poison or healing.

Just be careful. Unlike your regular attacks, spells will damage your allies, too. As Kotaku notes, using the Regroup ability is a great way to get everyone out of the way before you cast something. Or you can just use Regroup after you accidentally cook your friends and it'll be like it never happened. Up to you.

When you finish a battle, you'll receive a grade in three separate categories: time, finesse and offense. If you're like me, your finesse score is probably much lower than your other two. So, what gives?

Based on my experience so far, it seems like finesse is a measure of how skillfully you employ Final Fantasy 15's various special combat maneuvers, like blindsides (attacking an enemy from behind) and breaks (damaging an enemy's arms, legs, fins, etc.) Rather than just mashing the attack button until everything dies, try mixing it up with some more strategy and skill and your finesse score should increase.

Final Fantasy 15 guide: How to drive in the Regalia without fast traveling

Final Fantasy 15 is all about driving out on the open road with your pals, but if you're not careful, navigating somewhere using the Regalia can trigger a fast travel option. This is fine if you're in a rush, but it's way more pleasant to actually drive and experience the journey.

After selecting your car to travel somewhere using the "auto" option, choose "no" when the game asks if you want to fast travel to your location for a small price. You might think that this would cancel your trip altogether, but it'll just make you drive there in real time. It's a much more pleasant way to travel, and you'll often trigger small conversations between characters, too.

If you're ready to get your bromance on, you'll want to read up on all of Mic's Final Fantasy coverage, including a review roundup of Final Fantasy 15, the juicy details on gay Noctis/Prompto fan art, a guide to fishing in Final Fantasy 15, rumors about a PC release and Conan O'Brien's reaction to the game on his show.