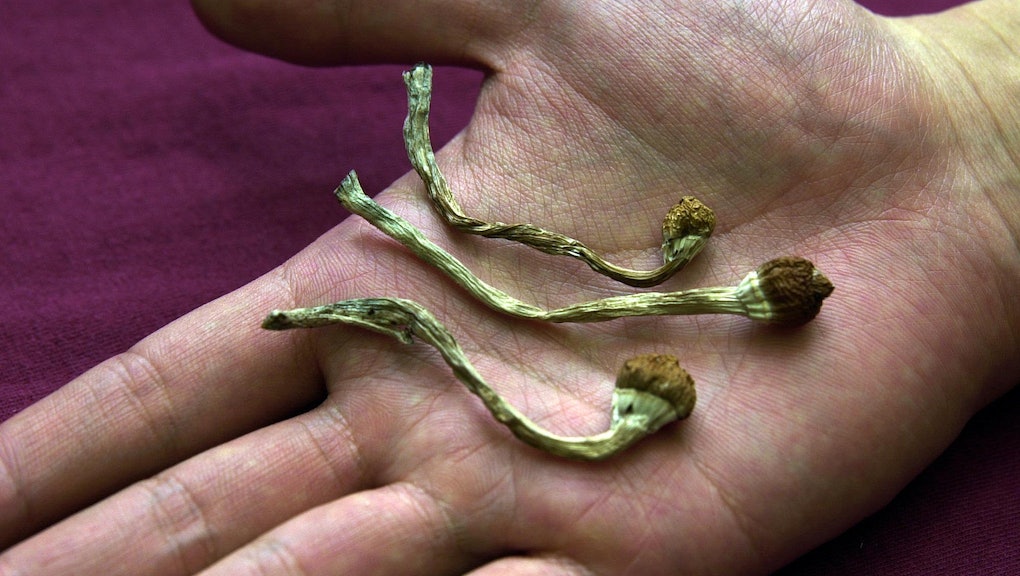 Cancer patients experiencing existential dread as a result of their illness might do well to seek treatment in an unexpected place: down the rabbit hole.

According to two new studies published simultaneously in The Journal of Psychopharmacology on Thursday, a single dose of psilocybin — the organic compound naturally found in "magic" mushrooms — could be enough to drastically reduce the anxiety and depression felt by many patients with terminal illnesses.

Researchers at New York University's Langone Medical Center and Johns Hopkins conducted clinical trials pairing a controlled dose of psilocybin with psychological counseling specifically tailored for those ingesting hallucinogens. After six months, 80% of patients in both studies were found to have lower clinical evaluation scores for anxiety and depression.

After the trials, patients also reported feeling marked improvements to their quality of life, including increased energy and desire to socialize and newfound sensations of peacefulness and spirituality.

In a press release, NYU Langone's director of substance abuse services, Dr. Stephen Ross, said if future clinical trials continue to prove successful, it could be a boon to the production of "safe, effective and inexpensive medication" to help alleviate existential anguish among patients with terminal illnesses.

According to the American Cancer Society, up to 1 in 4 patients with cancer also has some form of clinical depression.

"Our results represent the strongest evidence to date of a clinical benefit from psilocybin therapy, with the potential to transform care for patients with cancer-related psychological distress," Ross said.

In both the NYU and Johns Hopkins studies, adult participants with life-threatening cancers were given a measured pill dose of psilocybin and told to lay down and put on blindfolds, as pre-selected playlists of their own choosing wafted softly through headphones. Therapy teams were on hand to monitor changes in mood, visual perceptions and levels of spirituality throughout the experience.

Before beginning the study, Roland Griffiths, a professor of behavioral biology at Johns Hopkins University School of Medicine, admitted he was unsure the psychedelic properties of the treatment would be enough help patients receiving end-of-life care.

"I could imagine that cancer patients would receive psilocybin, look into the existential void and come out even more fearful," Griffiths said in a press release. "However, the positive changes in attitudes, moods and behavior that we documented in healthy volunteers were replicated in cancer patients."

The findings lend credence to an earlier trial conducted by UCLA researchers published in JAMA Psychiatry in 2011, which had similar implications for patients with terminal cancer receiving the treatment.

Researcher Anthony Bossis, a clinical assistant professor of psychiatry at NYU Langone, said that future trials larger than the 29 patients studied by NYU or the 51 patients studied by Johns Hopkins could possibly help to procure successful treatments for other psychological disorders as well.

"Our study showed that psilocybin facilitated experiences that drove reductions in psychological distress," he said in a release. "And if it's true for cancer care, then it could apply to other stressful medical conditions."

"That a drug administered once can have this effect for so long is unprecedented," he said. "We have never had anything like it in the psychiatric field."