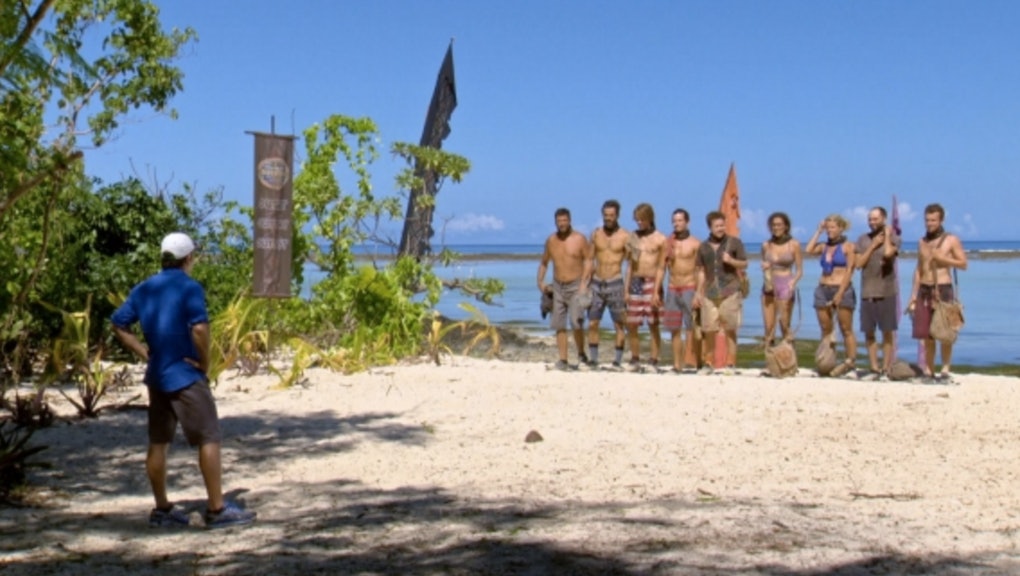 'Survivor' season 33, episode 11 recap: A visit from loved ones and a big move from Will

After last week's two-hour nail-biter of an episode that ended in devastation for unlucky Jessica Lewis, Survivor fans may have been hoping for something a little happier this week. It turns out, they got their wish.

In episode 11 of Survivor season 33, the castaways received a surprise visit from their loved ones. It was heartwarming — well, while it lasted. When the loved ones left, the castaways became conniving again; at the end of the episode, Zeke Smith was voted out.

David knows his four-person group is in trouble. Can he convince someone from Team Zeke to swing to his side?

Meanwhile, Ken makes a fun discovery: After her elimination, Jessica willed him her secret advantage — a mysterious reward he'll get if he makes it to Day 36. Ken's excited, as the advantage could move him one step closer to a million bucks and a better life for him and his daughter. Did you know Ken had a daughter? I didn't. He should talk about her more — it makes him seem, well, a little less self-obsessed.

It's time for the Reward Challenge, and by golly, it's a good one. The castaways have been in Fiji for weeks, and according to host Jeff Probst, it's "the perfect time for love." Just like that, Sunday's husband comes running out to greet her, followed by Bret's dad, Jay's sister, Hannah's mom, Adam's brother, David's dad, Ken's brother, Zeke's dad and Will's mom. If you win the physical challenge, you get to bring your loved one back to camp for a barbecue. If you lose, it means you didn't love your loved one enough. Sorry.

Everyone is in tears — especially Adam. His mom has stage 4 lung cancer, and he's eager to get updates from his brother. Now, remember: Adam has a special advantage that lets him steal someone else's reward. He could use it now — but chooses not to. He can't bring himself to take another player away from their loved one. Thoughtful!

Each contestant is attached to a long rope and has to thread themselves through a series of obstacles. Jay wins — and gets to choose three others to join in his prize. First, he picks Will and Sunday. Third, he picks Adam; even though Jay has clashed with him, he respects that Adam didn't steal the reward.

At camp, Adam's brother fills him in on their mom's condition. She stopped undergoing cancer treatment, but is apparently regaining strength. Part of that strength, Adam's brother says, comes from Adam being on Survivor.

"I'm here to bring joy to my family — to make them proud, and to give them as much to look forward to as humanly possible," Adam tells the camera. "And the better I do in this game, the longer I last, the more that I make my mom happy. I have to stay focused."

Is Adam getting a winner's edit? It certainly seems possible — especially when, as a thank you, Adam passes his reward-stealing advantage onto Jay.

Before Will can put on his big boy pants, it's time for the Immunity Challenge. Each castaway has to use two handles to keep a vertical metal rod in place. It's an endurance challenge, but it's over quickly. After just four minutes, more than half the players are out. Ultimately, Adam wins Immunity.

Will, meanwhile, is pumped that Zeke didn't win. Like a child determined to be seated at the adults' table, Will announces it's finally time to make his big move — to switch sides, vote out Zeke and show people this 18-year-old high schooler from New Jersey came to play. Aww, cute!

"It's like Will just got his driver's license and we're all sitting in the back terrified," David says.

After the challenge, Zeke and his cronies suspect something is up: It's almost time for Tribal Council, and David, Hannah, Ken and Adam seem way too calm. Nevertheless, they plan who they'll vote for. They know David has found a bajillion idols this season, and figure he might have another — so they opt to vote for Ken instead.

Ready for things to implode? Here we go. In the hope of earning Ken's trust, Will reveals Team Zeke's plans to vote him out. I'm not sure what reaction Will expected from Ken, but I doubt it was this one: Ken marches angrily up to Jay and demands an explanation for what Will just told him.

It's bad news for infant baby Will, who throws a temper tantrum because his game is blown up. It also reflects poorly on Ken: He revealed his alliance's secret plans in the interest of confronting Jay. He didn't have to convince Jay not to vote for him — thanks to Will's side-swapping, Ken had the numbers he needed.

"This guy preaches about honor and integrity ... and then he has the audacity to pull this crap on me?" Will howls to the camera.

Before Tribal Council, Team Zeke makes a quick change of plans. Given what happened at the last Tribal Council, they fear David may play an idol for Ken again. Instead, they'll vote for Hannah.

Despite his plan blowing up in face, infant baby Will is still in a position of power: Will he side with Zeke and vote for Hannah, or side with David and vote for Zeke? "Either way I'm in control, and there is nothing anyone can do about it," he declares.

At Tribal Council — after Will does more whining about feeling like a baby — everyone casts their votes. Would anyone like to play a hidden Immunity Idol, Jeff asks?

Shockingly, Adam stands up. I'd nearly forgotten he had an idol! He has one — and he plays it on behalf of Hannah. How did he know the opposing alliance was voting for Hannah instead of Ken?

I don't know, but it was clearly the right move. The first three votes are for Hannah — and none of them count. The next three are for Zeke, and it's enough to send him packing.

Will, it turns out, voted for Zeke — but because Adam played his idol, his big move didn't end up mattering all that much. Sorry about that, li'l guy.