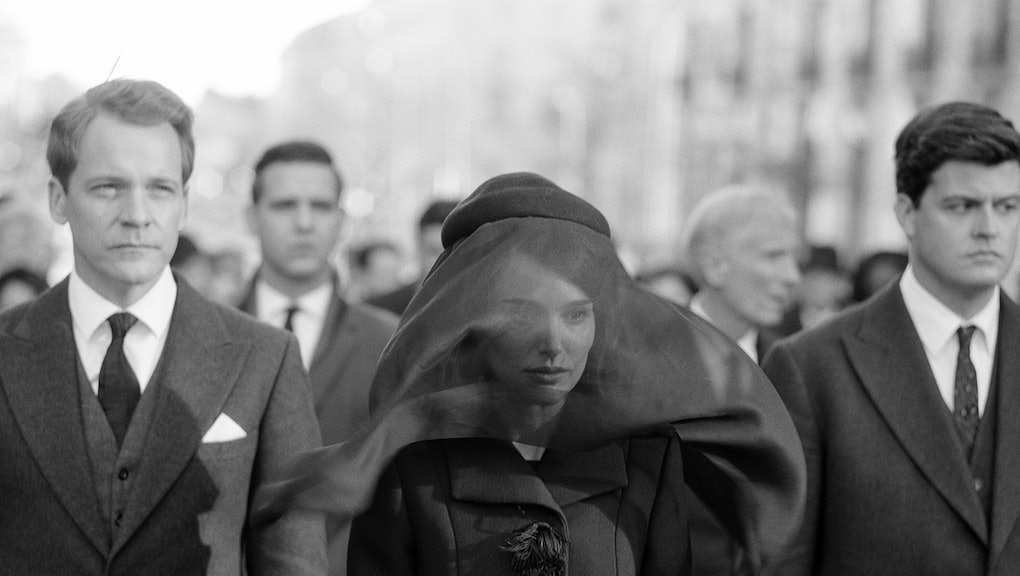 Susan Sontag offers several accounts of camp in her 1964 essay "Notes on 'Camp.'" One states that camp is "love of the unnatural: of artifice and exaggeration."

Jackie, Chilean director Pablo Larraín's third film with a 2016 release date (following The Club and Neruda) is an effective — albeit bizarre — portrait of Jackie Kennedy in the days following the assassination of her husband. It's bizarre because, throughout its 99 minutes, we see several Jackies: the faces she puts on for the masses, her family, her children, her deceased husband, herself. Jackie is all about performance, a highly stylized biopic not so much interested in truth as in the ways we choose to present ourselves to the world.

While not entirely camp or even melodramatic — Larraín's film is rarely explosive or over-the-top — the essence of Natalie Portman's performance is evocative of Sontag's idea. It's as artificial and unnatural as they come. There is nothing understated about her Jackie, immediately evident in the film's early moments when we hear Portman first channel Kennedy's breathy, faux-British mixed with Bostonian mixed with who knows what accent.

Larraín isn't so much interested in approximations though, in capturing "the real Jackie," but using Portman — who delivers the best performance of her career — to a show a woman concerned with her image, not only in her present reality but in terms of her future and the legacy of her gone-too-soon husband. Jackie argues there's no singular persona, only what we choose to show and to not show. Midway through the film, she even says it: "I lost track somewhere, what was real, what was performance."

Jackie begins with the widow, shortly after she's been kicked out of the White House, at the Kennedy Compound in Hyannis, Massachusetts. She's giving a rare interview to journalist Theodore H. White (Billy Crudup), whom she has called to Cape Cod a week after her husband's death in an effort to — as she makes abundantly clear — secure his legacy.

She's overwhelmed with grief and anger. Portman captures a woman who, fascinatingly enough, can unravel in front of this stranger while still being completely in control. "I'm guessing you won't allow me to write any of that," White says in one memorable scene, after Jackie says a little bit too much. "No, because I never said that," she replies, coming across as both devilish and innocent.

Larraín then jumps to the day of the Kennedy assassination, where Jackie and President John F. Kennedy are visiting Dallas. We know what happens — how while riding in a limousine with the governor of Texas and his wife, Kennedy was shot in the head. Jackie presses against him, tries to stop the bleeding as they speed away to the hospital, unaware at this point that his blood and chunks of brain have stained her now famous pink Chanel suit.

On the plane back to D.C., Jackie realizes that she's no longer the first lady — that she and her kids will have to move out of the White House, and that there's a chance JFK will be forgotten as other presidents who died in office have been forgotten.

This becomes her mission: not to be forgotten. In confessions with a priest (John Hurt), with her friend and personal secretary Nancy Tuckerman (Greta Gerwig) and when talking to brother-in-law Robert F. Kennedy (Peter Sarsgaard), she frames — and perhaps believes — it as being for the benefit of her husband, a man who did so much and still had so much to do. But we see it differently.

She must decide how to act in front of her children (there's a devastating scene where Jackie decides they must go ahead and celebrate her young son's birthday), and how to behave in front of the new Johnson administration. Flashbacks from her famed televised interview tour of the White House show that Jackie has always been concerned with how she must come across. She worries, shortly before this interview, that the country will see the riches within the White House as superficial, indulgent — but she is eager to showcase the cultural history of the home she is desperately trying to make her own.

It is for her benefit that she decides her husband's funeral procession should be public, that everyone should see her in mourning marching with a black veil over her head. It's dangerous, possibly stupid, but Larraín makes the image a searing one. How can this woman be forgotten?

With a screenplay by Noah Oppenheim, a chilling score by Mica Levi and Larraín's direction — he shoots Portman in mostly close-ups — Jackie's success lies in its ability to transcend traditional biopic fare. There's no truth Larraín is trying to uncover about Jackie Kennedy. If anything, by the film's close, there's very little we actually know about the first lady. All we have are her conversations, snippets of her intense, all-consuming grief that create flashing and layered images of a woman who perhaps was always intended to be larger than life. In short: a performance.

But there's another layer. We have Portman, who plays Jackie far from safe or comfortable. She gives us a Jackie we will never fully know: a woman marked by trauma, by grief, by a life-altering decision to marry into the public life and all the ways she has to be because of this decision. Yet the brilliance of Larraín's film and Portman's characterization lies in how sympathetic we end up feeling for a woman we will never truly understand.