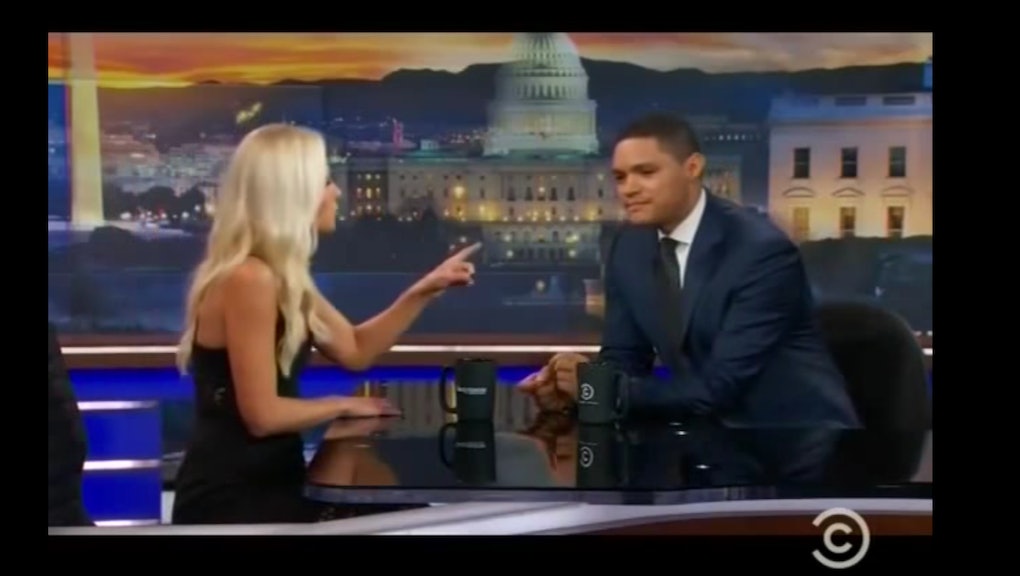 Daily Show host Trevor Noah welcomed right-wing provocateur and internet commentator Tomi Lahren onto his show on Wednesday evening for what was a respectful but passionate back-and-forth that covered topics like Black Lives Matter, Colin Kaepernick and the mainstream media.

Lahren is best known for her long rants from the Final Thoughts segment of her show on conservative news outlet The Blaze. One of her most infamous rants is about Kaepernick and her criticism of his decision to kneel during the national anthem.

The audience let out a loud, tense laugh after Lahren's comment.

"You don't see color?" Noah responded. "What do you do at a traffic light?"

After saying she didn't see color, Lahren insinuated that she is unable to speak about racial issues, including Kaepernick's decision to kneel during the national anthem, because she is white.

Noah quickly responded, "No one brought up white at all. I never said that. I don't see color."

Lahren also had some choice words for Black Lives Matter, who she's likened to the KKK in the past, as well.

"I think, and I've said this many times, it started with good intentions," Lahren said of the activist group. "The minute that protesting turned into rioting and looting and burning and militant actions, that's when I lost respect for Black Lives Matter."

However, Noah countered Lahren and said she shouldn't hold an entire movement accountable for the actions of a few people. He also reminded Lahren that the KKK endorsed Donald Trump for president.

"You're the same person who argued on your show that just because Donald Trump has supporters from the KKK doesn't mean he's in the KKK."

Several people on Twitter responded to the interview, with some saying that Noah didn't take Lahren to task for her comments:

Comedy Central has the full video.