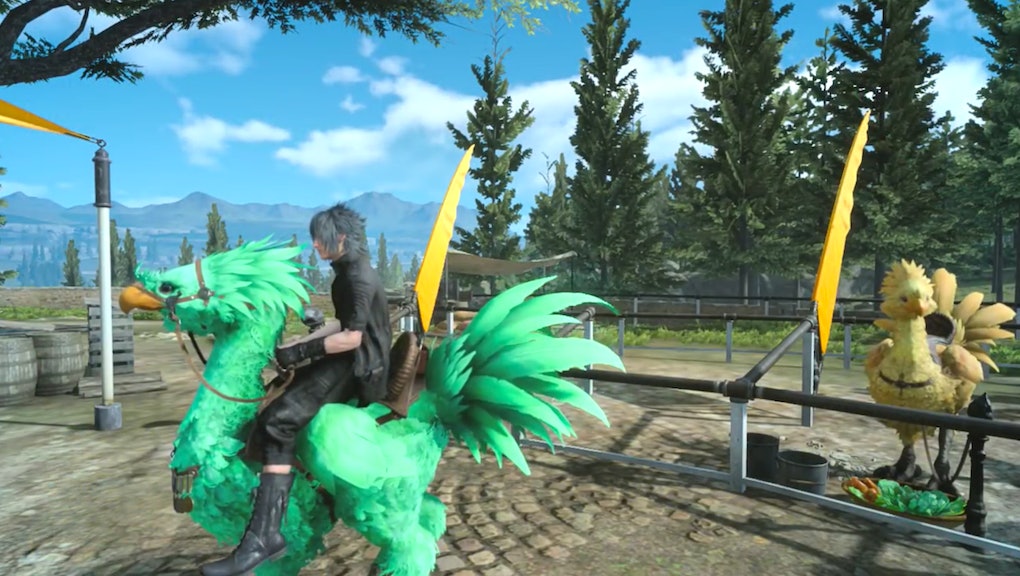 'Final Fantasy 15' Chocobo colors, racing and the quest to unlock them

Chocobos are one of the most recognizable critters from the Final Fantasy universe, and in the open-world environments of Final Fantasy 15, they provide an important service: carting Noctis and his royal squad through the wilderness.

In order to unlock them, you have to do a bit of legwork — but it's worth it. Read on for everything you could ever want to know about chocobos in Final Fantasy 15.

In Hammerhead Station, the first area of the game, you may have noticed the little chocobo-shaped sign by the side of the road, only to be greeted with an error message telling you the rent-a-bird program was temporarily unavailable.

In order to rent and ride chocobos, you have to complete a specific set of quests during chapter 3, which you can start by visiting Wiz Chocobo Post in Duscae. After completing two quests that Wiz gives you — "Friends of a Feather" and "A Behemoth Undertaking" — speak to Wiz again and you'll unlock the ability to rent chocobos for 50 gil per day from any of those vaguely chocobo-shaped signposts throughout Eos.

As long as your rental period persists, you can call your chocobo to your side at any time by holding the right trigger and tapping left or right on the D-pad. Not only are chocobos helpful for navigating wilderness areas your car can't handle, but you can also race them!

Like Noctis and his teammates, chocobos level up over time — up to a maximum level of 10 — which is helpful to know if you're struggling to win races. Leveling up will increase a chocobo's stamina and speed. So as long as you're riding them regularly over the course of your adventuring, you should be able to revisit any races that gave you a hard time later in the game and win without much trouble.

Chocobos also get some special stat buffs when they're stuffed with yummy food, so consider giving them a snack if you need a little extra help in a race. All you have to do is take a chocobo to a campsite to give them some food, which you can buy at Wiz Chocobo Outpost.

Did you know you can change your chocobo's color? By talking to the woman near the chocobo pen at Wiz Chocobo Outpost, you can rename your chocobo, customize its color and adorn it with the medals you've earned in chocobo races.

To unlock new dyes for your chocobo, you have to find specific fruits and other items. You'll receive some as quest rewards, and you can also find exotic pear varieties within specific chocobo races.

Certain pear varieties can only be found under very specific conditions — during races with certain characters, for example — so check out the video below for detailed information on exactly where these pears are.

If you're ready to get your bromance on, you'll want to read up on all of Mic's Final Fantasy coverage, including a big list of tips and tricks, the juicy details on gay Noctis/Prompto fan art, a guide to fishing in Final Fantasy 15, a review roundup for Final Fantasy 15, rumors about a PC release and Conan O'Brien's reaction to the game on his show.