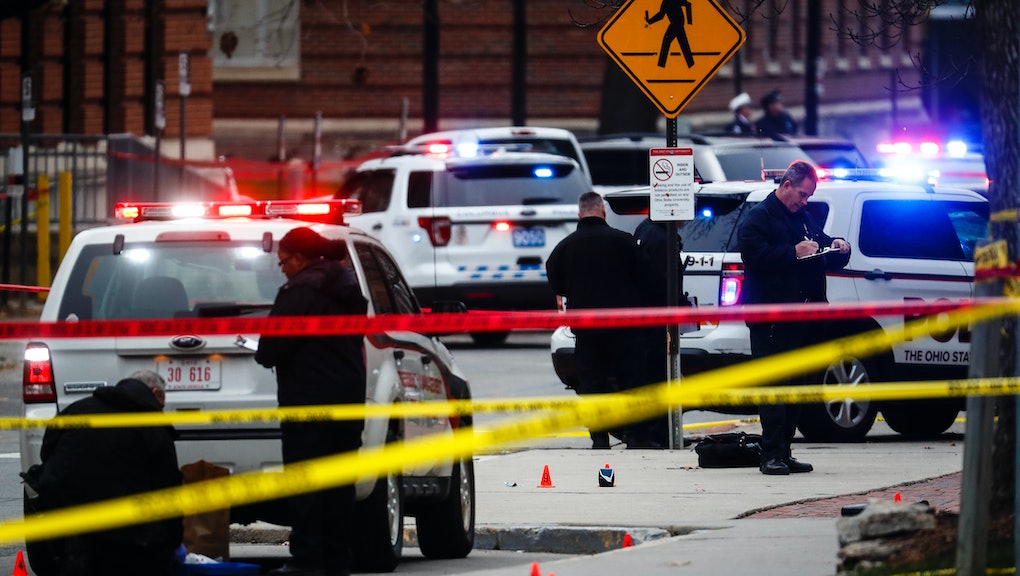 Shortly before 10:00 a.m. Eastern on November 28, 18-year-old college student Abdul Razak Ali Artan drove a Honda Civic into a crowd of pedestrians at Ohio State University. After ramming the vehicle into a concrete block, Artan climbed out and started slashing at people with a butcher knife. Eleven bystanders were injured before a campus police officer shot and killed him.

Artan was a Muslim and a refugee from Somalia, making him an ideal target for Donald Trump, who won the White House in part by appealing to anti-Muslim sentiment. "ISIS is taking credit for the terrible stabbing attack at Ohio State University by a Somali refugee who should not have been in our country," the president-elect tweeted on Wednesday.

When Trump called for a ban on Muslim immigrants entering the U.S. last December, he was talking about people like Artan: disaffected young men who'd been displaced by war back home and radicalized to commit terrorist acts against Americans. It didn't matter to Trump that attacks like Artan's are rare on U.S. soil — particularly compared to how frequently mass killings are committed by white men each year; even if only one took place, Trump's Islamophobia would appear justified. To the president-elect and his supporters, this is what happens when a "malignant cancer" like Islam — as Trump's national security advisor Lt. Michael Flynn put it in August — is allowed to spread to the West.

The question, today, is whether Americans are strong enough to resist such rhetoric and the policies Trump plans to implement through it. It will be more difficult than ever these next four years, and history suggests we may fail. Since the September 11 terror attacks, the U.S. has been a hotbed of thinly veiled anti-Muslim sentiment. Profiling has become de rigeur. Authorities under the Bush and Obama administrations have implemented a massive — and massively ineffectual — surveillance apparatus targeting Muslim communities. Our airport and border security systems have proven to be rampantly discriminatory. The U.S., in general, has grown unnervingly comfortable with treating all Muslims like terrorists-in-waiting.

Donald Trump has promised to take these practices to their logical extremes. He aims to criminalize Islam in the U.S. by requiring Muslims to register for anti-terror tracking. He plans to block Muslim immigration and the resettlement of desperate Muslim refugees. His appointment of hardline Islamophobes like Lt. Flynn comes at a time when anti-Muslim violence is spiking and education activists are fighting to purge Islam from public school curricula nationwide.

It's a platform that a disturbing portion of Americans have embraced. Fear is bipartisan, too. Even Trump's general election opponent, Democratic nominee Hillary Clinton, spoke about Muslims during the debates almost exclusively in the context of national security.

It's not hard to see where such thinking may lead. Registries and bans on the basis of religion do not criminalize people by coincidence, or through cryptic dog-whistle terminology. They are explicit and intentional. They make Islam a crime. History has precedent for where this might lead, though no roadmap is perfect. On one hand, there's Arizona's SB1070, which requires police officers to seek out the immigration status of people they arrest or detain if they suspect them of being undocumented. At the other extreme, there's the Holocaust.

So how much peace of mind will Americans be willing to suspend to prevent such an outcome? How much of our tenuous veneer of safety — enforced using Islamophobic laws and measures — are we willing to sacrifice to prevent Muslims from plummeting into second-class citizenship? There's no silver bullet to ending terrorism. Profiling has been demonstrated as ineffective and counterproductive time and time again. But Trump's administration will offer countless opportunities to institutionalize these practices to an unprecedented degree.

The mark of a morally exceptional nation — which America believes itself to be, but in reality, rarely has been — lies in its ability to endure horrifying acts of violence like Artan's attack, stand by its stated civil rights principles and rebuke casting everyone who shares his religion as criminal. There's little to indicate Americans will do this. But with the most gleefully autocratic and openly bigoted president in modern U.S. history taking office in less than two months, it may be one of the few available paths to becoming the great country we say we are.