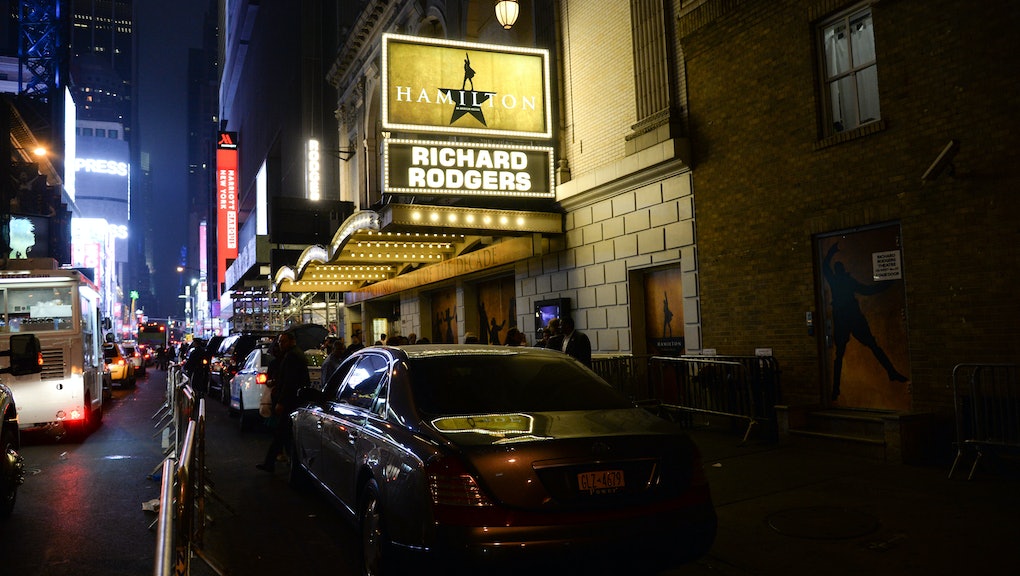 'Hamilton Mixtape' release hits the streets with the help of Ashanti, Andra Day and more

When Ashanti, Andra Day and Ja Rule took the stage at the Richard Rodgers Theatre to celebrate the release of the Hamilton Mixtape, it was clear this #Ham4Ham was unlike any other.

The Hamilton Mixtape #Ham4Ham, which was held at 12:50 p.m. Eastern on Thursday in the theater, saw people dancing in the aisles before the singing even began. The stage was empty, except for DJ !Illmind spinning tunes for the audience.

The moment the songs began, so did the screams. A few chords of "Stay Alive" played, followed by notes from "Wait For It." Joell Ortiz and Busta Rhymes then performed the "Rise Up Remix." Only a few notes in, and the audience members were up on their feet.

While writer and former Hamilton star Lin-Manuel Miranda was not at the theater to host the event, he addressed the audience via video from London. He was quickly followed by Regina Spektor, who sang a moving rendition of "Dear Theodosia." The song, which is sung by Aaron Burr and Alexander Hamilton to their respective children, is an extremely moving moment, and, performed by Spektor onstage without props, costumes or the context of a singing to a child, was still very emotional.

Spektor was followed by Andra Day, who offered an entirely new take on the song "Burn." In the musical, "Burn" is sung by Eliza, Hamilton's wife, after she learns of his affair with another woman. Devastated, Eliza sets fire to the love letters her husband wrote her. The original Eliza, Phillipa Soo, and the current Eliza, Lexi Lawson, both possess clear, lilting sopranos. Day, who performed the song dressed in a pink fur coat and metallic outfit, possesses a sexy, raspy voice that drew cheers, and then a standing ovation, from the audience as she emphasized different moments in the music, as well as adding some sass to the song in the lyrics that are often perceived as broken-hearted or infuriated.

The concert took a lighter note when Ashanti and Ja Rule took the stage to duet on "Helpless," the love duet that narrates Hamilton courting Eliza. The song, which depicts Eliza's giddy, even naive, excitement at falling in love during the American Revolution, took a much more flirtatious and sexy tone when performed by these two, who strutted around each other onstage.

#Ham4Ham, a series of live performances outside the theater during the show's lottery for $10 tickets, began when the Tony-winning musical was in previews in 2015. Performances included cast members and guest stars, including actress Audra McDonald, comedian Jimmy Fallon and Olympic gold medalist Maya DiRado. Hosted by the musical's Lin-Manuel Miranda, #Ham4Ham drew enormous crowds, and the cast performed at the White House after being invited by President Barack Obama and First Lady Michelle Obama.

Miranda had originally conceived the show as a concept album or mixtape of songs before it evolved into a three-hour, Tony-winning, record-breaking Broadway musical. Part of the novelty of Hamilton was the fact that its score is packed with rap and hip-hop numbers — a novelty for Broadway audiences — but the musical is still a theatrical experience, and the #Ham4Ham performances were unabashedly exciting for Broadway fans.

In the year and a half since Hamilton first bowed Off-Broadway at the Public Theater, fans of the play have evolved from being dazzled by the show, to knowing every song by heart. The Hamilton Mixtape will surely offer a new take on the music that will move it back to the top of everyone's playlist.