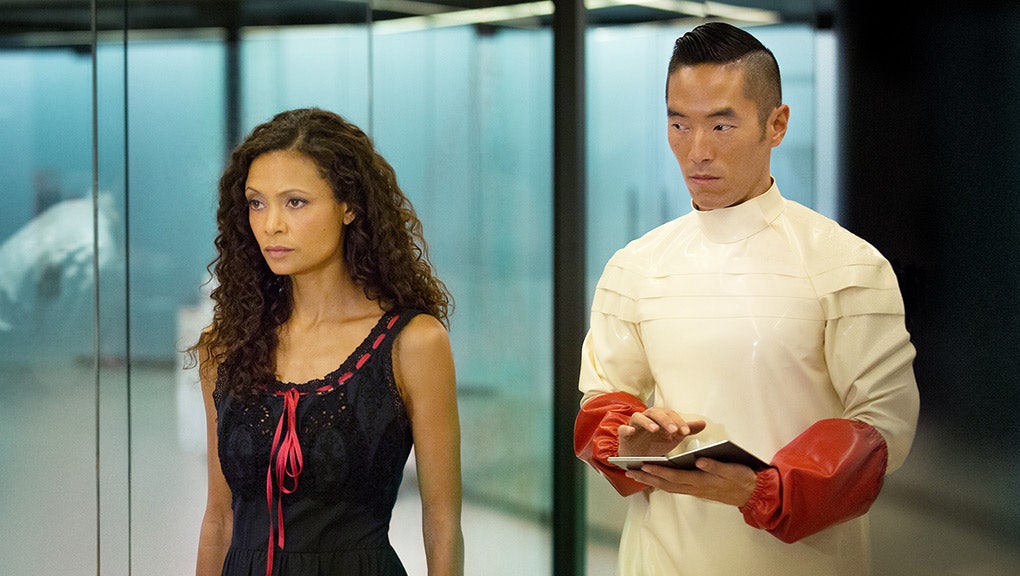 The gritty, violent and sex-filled world of Westworld seduces everyone who enters. Indulging in the violent and sexual acts has played out for multiple characters in the series since the first episode, but it holds especially true for William, who fell for Dolores despite knowing she's a Host.

It may seem like an impossible scenario — a human falling for a machine — but given the level of technology inside the park and the ability to become so physically intimate with the Hosts, it's not a far stretch to imagine that William (or should we say the Man in Black?) could develop real feelings of affection for one of them.

But some of the technology within this fictional world already exists today, specifically in the form of sex robots. Granted, the animatrons currently available aren't sentient like Dolores, and they're not lifelike enough to pass the Turing test — an evaluation that measures a machine's ability to exhibit intelligent behavior indistinguishable from a human — but they're definitely more than just silicone orifices.

RealDoll, for example, is a company that specializes in creating hyper-realistic "love dolls," replete with synthetic skin, joints, hair and eyes. The dolls aren't quite full-fledged sexbots just yet, as they can't carry on a conversation with their owners or even move under their own power. But RealDoll CEO Matt McMullen is ardently working on bringing his products to life.

"I met some people in robotics and started asking, 'How can we connect [artificial intelligence] to robotic dolls?' That's at the core of what we're doing: integrating artificial intelligence into RealDolls," McMullen told Vice. "We're spending time and effort perfecting the AI as much as possible so that interactions with the dolls are entertaining and believable. We're not trying to fool you into thinking, 'Is this a real person?' We're trying to make the experience something you'll enjoy."

McMullen is putting the finishing touches on his artificial intelligence system to be used in conjunction with a robotic sex doll, and hopes to have the first iteration of his Host-like RealDolls available by the end of 2017.

What role will sexbots have in our society?

With RealDoll's current offerings, and especially with the designs they have planned for the future, the role sexbots will play in our everyday lives will undoubtedly become increasingly blurred.

Take William for example. His emotional connection to Dolores becomes evident early on and it's clear he cares for her on a level deep enough to challenge his commitment to his fiancée back in the real world. In episode seven, "Trompe L'Oeil," William finally throws all caution to the wind and has sex with Dolores; in episode nine, "The Well-Tempered Clavier," we see his love crescendo into a grisly display of violence after Logan disembowels his beloved animatron.

Normally, these types of behaviors — love, jealousy and anger — would only be displayed among human partners, but what would happen if sexbots became as lifelike as they're portrayed in Westworld? Would human beings fall like William, or would they be able to separate fact from fiction, realizing their robotic counterparts are nothing more than an amalgam of synthetic components?

David Levy, author of Love and Sex with Robots: The Evolution of Human-Robot Relationships weighed in on the topic, and his insight reveals that many of the Guest-Host relationships in Westworld will likely be mirrored in our own world.

"As sex robots become more sophisticated and more humanlike, some people will ultimately feel jealous under certain circumstances," Levy explained to Mic. "I think it will be possible in a few decades' time for humans to feel the same way toward sexbots as they do toward other humans. When robots become extremely sophisticated, they will be almost indistinguishable from humans. They'll be so much like us that people will be able to form relationships with them and be able to feel for them just like they do with normal humans."

Humans and sexbots are not created equal

But why would one even want to own a sexbot in the first place? Are these mechanized love dolls merely an outlet to express one's sexual desires in a controlled environment, or could they be a gateway to a real, meaningful relationship? In Westworld, the Hosts serve as both, and Levy believes the role of sexbots could play out similarly in our own society in the coming years.

"There will be all sorts of different uses for sexbots," Levy said. "The most popular use will be for people who are unable to form satisfactory relationships with humans — people who may have a psychosexual hangup, or are not attracted to the opposite sex and are looking to fulfill a sexual relationship, but for whatever reason can't get it together. Sexbots will allow them to engage in sexual relationships."

From a physical aspect, it makes sense that sexual acts can be performed with sexbots in the same way as humans. But what about on the biological side of things? It's believed the hormone oxytocin, which is released during sex and other intimate gestures like hugging or holding hands, is one of the key elements to falling in love, and Levy predicts having sex with a life-like robot could solicit the same biological responses.

"To a very large extent, yes, this will be possible," Levy said. "As sex robots become extremely realistic, human beings will enjoy more and more having sex with them. And we're talking about artificial intelligence as well, which will let sex robots be programmed with all the sexual knowledge ever written. They'll become the greatest lovers that have ever existed and be able to teach their human counterparts how to have better sex themselves."

To most people, sexbots are probably starting to sound like pretty much the best thing ever, but these mechanized lovers do pose some inherent risks. As artificial intelligence increases and as the production processes of sexbots advance to the point where they're lifelike enough to easily pass the Turing test, will humanity forsake their real partners for synthetic ones? In William's case, we've watched as he's toiled with his developing feelings for Dolores, but according to Levy we don't have much to worry about in that regard.

Is there a downside to having a sexbot?

There are, however, other pitfalls that could come with the rise of the sex machines. For men especially, the knowledge that a woman has easy access to the perfect mechanical lover could leave them feeling like they can't measure up, Levy said.

"Potentially, there's scope for people, especially men, to feel anxiety over sexbots," Levy said. "Imagine you're dating a women and you're going to have sex with her for the first time, but before you do she tells you she's just had the best sex of her life with a robot. Men will have anxiety over not being able to perform as well — feelings of insecurity and anxiety, worrying about whether they can perform as well as a robot."

Thankfully, Levy said there's also myriad positives to sexbots, like staving off loneliness, not having to worry about contracting a sexually transmitted disease and increasing our sexual proficiency via instruction from sexually skilled robots.

The future of sexbot technology

Regardless of how human-robot sexual interaction ends up playing out, we're still a ways off before something resembling Westworld's Hosts finds their way into our bedroom.

"At the moment we are at the very dawn of this technology and the people at RealDoll will likely be the first to launch a real sex robot," Levy said. "Within 10 years, sex robots will become quite commonplace. They won't be wonderfully sophisticated, but they'll be functioning and they'll improve with time."

Westworld has given us a glimpse into a world where humans and hyper-realistic sexbots commingle, and if what transpires on the show is any indication of what's to come in our own society, there are some truly exciting times ahead of us. Just make sure to take precautions so you don't end up suffering the same fate as Arnold.