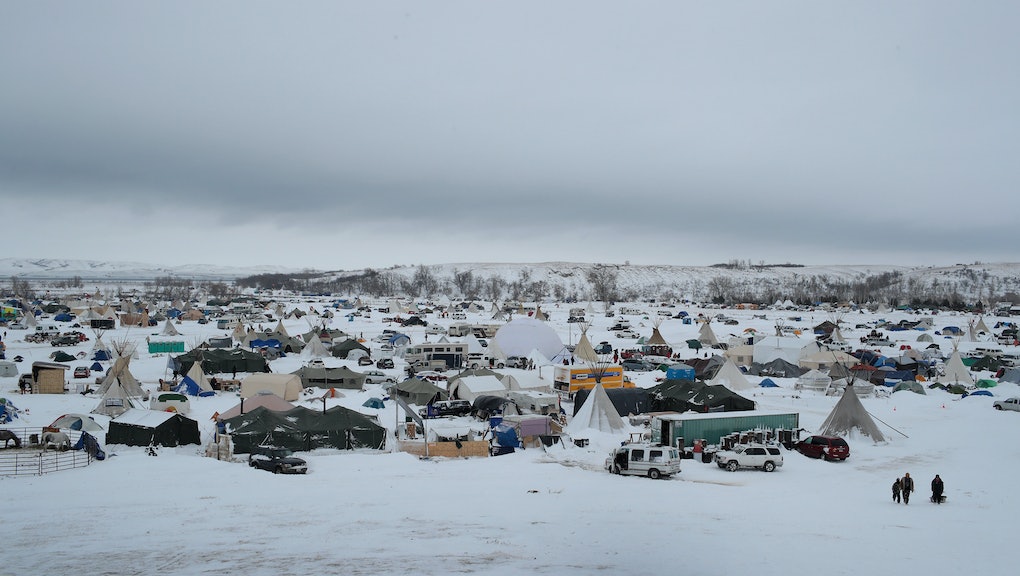 Standing Rock is a well-organized, small city and will be impossible to evacuate

Cannon Ball, ND - The first thing you notice once you enter Oceti Sakowin Camp, close to the front lines of the showdown at Standing Rock, is that the "camp" is now a small city, housing some 8,000 people. That includes indigenous people, activists, visitors and media, all camping in the snow in below freezing temperatures. The indigenous people of Standing Rock have expanded the camp and have meticulously organized a massive operation running solely on donations, volunteer work and the spirit of the Sioux people and the visitors who've come to protect the water with them.

Many structures are so strongly built that you can walk on the rooftops. Notably, there is a school that has been teaching a class of Lakota youth as a home school resource center since August, which is planning an expansion.

That some refer to Standing Rock as their "home" is not hyperbole; for many Sioux, their home at Standing Rock is now a permanent residence. As you look around the small city, one thing becomes clear: Short of a small military invasion, requiring demolition and significant force, an evacuation is simply not realistic.

To the north, closer to the hills where law enforcement is set up, the Indigenous Peoples Power Project has set up a sparse camp and training center, holding mandatory classes for anyone headed to the front lines. At the IP3 camp, instructors stand in front of hundreds of protesters, demonstrating how to flush chemical weapons out of someone's eyes should they be teargassed. In the back of the IP3 camp, large groups simulate formations while instructors role play as police, battering and tussling would-be water protectors.

Across the camp, atop Facebook Hill (the best spot for clear reception), a small hut with laptops and a wood stove serves as the media registry. Two tents down, a legal team will take down your information — get arrested at Standing Rock, they say, and you will be bailed out.

The press credentialing and guidelines are strict: All press must wear a camp-issued press badge visible at all times. No one can be photographed without permission, and no photos of horses or teepees without permission either. Caught taking footage you're not supposed to, and security can confiscate your camera and demand you delete footage.

On Facebook, where incoming supporters share information, there's a new rumor nearly every day of what is and isn't happening at the camp. Some claimed that police shut down access to all supplies from the outside, but supply routes are still open. Some believed drones had been banned, but drones are in the air. However, alcohol, drugs and weapons of any kind are banned from camp. Security check through supplies, confiscating contraband like alcohol when it comes through.

It is unclear when the next action will be, but every morning there is a schedule for Oceti Sakowin Camp, with notices posted, whiteboards updated and signs put up in meeting halls and port-a-potties with new requests and announcements. Action meetings are at 8 a.m., mandatory orientation is at 9 a.m. Before dawn, a group leaves from one of the sacred fires for prayer. White allies are told to attend at least one of these prayers to pay respect. White allies are also recommended to attend to one of the many decolonization education sessions that are held at the dome every other night at 6 p.m.

Once night falls, the loudspeaker broadcasts drums, singing and prayer from the sacred fire. As people pour into the mess halls for dinner, sledders take to the icy side of Facebook Hill in the dark, lit by car headlights and, of course, the floodlights.

The floodlights line the hills along the north, and about a dozen are visible at a time. They belong to law enforcement, and they mark where police and Dakota Access Pipeline employees are camped out.

At the top of Facebook Hill, a Native man named Tom points beyond the floodlights to a space between the hills. Pinpricks of light, possibly vehicles, move quickly beyond police lines — it's unclear from the height if they're moving through the air or along a high road.

"That means that something's coming in," he said. "We just don't know what yet."