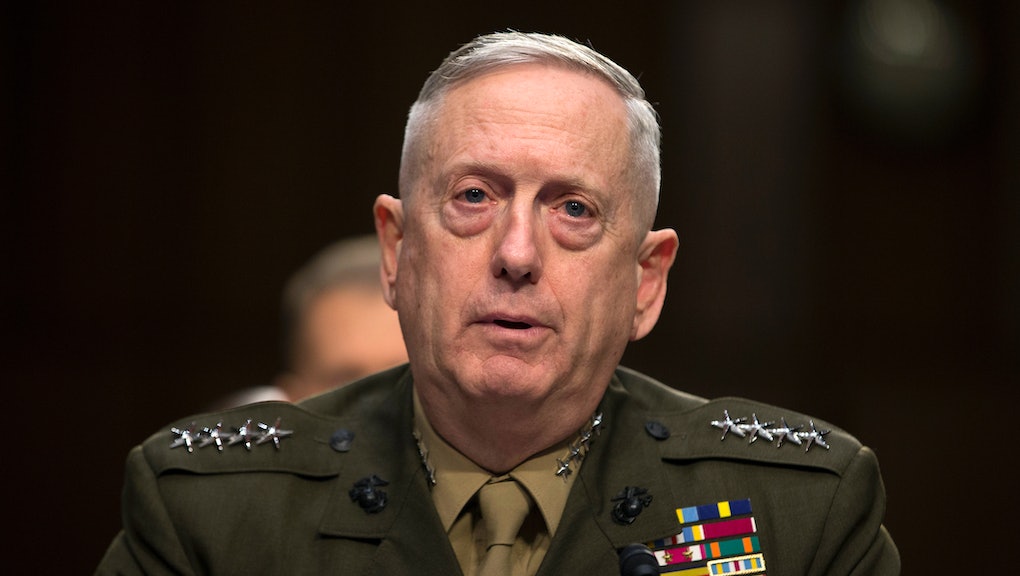 Who is Gen. James 'Mad Dog' Mattis, Trump's pick for secretary of defense?

But when the position of defense secretary was created in 1947, it was with the stipulation that any former officers who served in the position had to have been retired from the military for at least seven years — Mattis however, only retired in 2013.

In order to be confirmed as defense secretary, Mattis will need Congress to pass a waiver, allowing him to serve despite his recent military service. According to Time, "early indications from Capitol Hill suggest Congress will exempt Mattis," making it possible for him to hold the position.

But at least one senator has already said she will vote against the waiver — less than an hour after Trump announced Mattis as his pick for the position, Sen. Kirsten Gillibrand released a statement saying that she will not support the waiver that would allow Mattis to serve, Politico reported on Thursday.

"While I deeply respect General Mattis' service, I will oppose a waiver," Gillibrand said in the statement. "Civilian control of our military is a fundamental principle of American democracy, and I will not vote for an exception to this rule."

Mattis, nicknamed the "Warrior Monk" because of his lifelong singledom, is known for strong, often controversial opinions — once saying of serving in Afghanistan, "You got guys who slap women around for five years because they didn't wear a veil. You know, guys like that ain't got no manhood left anyway. So it's a hell of a lot of fun to shoot them."

But Mattis has some strong stances that may put him at odds with President-elect Trump, especially when it comes to waterboarding, which Trump has said he wants to bring back despite the fact that it has been condemned as torture by military veterans like Sen. John McCain, who was subjected to torture while being held as a prisoner of war in North Vietnam.

Trump told the New York Times that he was "surprised" that Mattis told him he did not find waterboarding useful. "General Mattis is a strong, highly dignified man," Trump said. "I met with him at length and I asked him that question. I said, what do you think of waterboarding? He said — I was surprised — he said, 'I've never found it to be useful.' He said, 'I've always found, give me a pack of cigarettes and a couple of beers and I do better with that than I do with torture.'"

But, despite Trump's apparent surprise at Mattis' answer, he added that he would still push for waterboarding if popular opinion supported it, indicating he and Mattis could potentially clash in the future. "If it's so important to the American people," Trump said, "I would go for it."