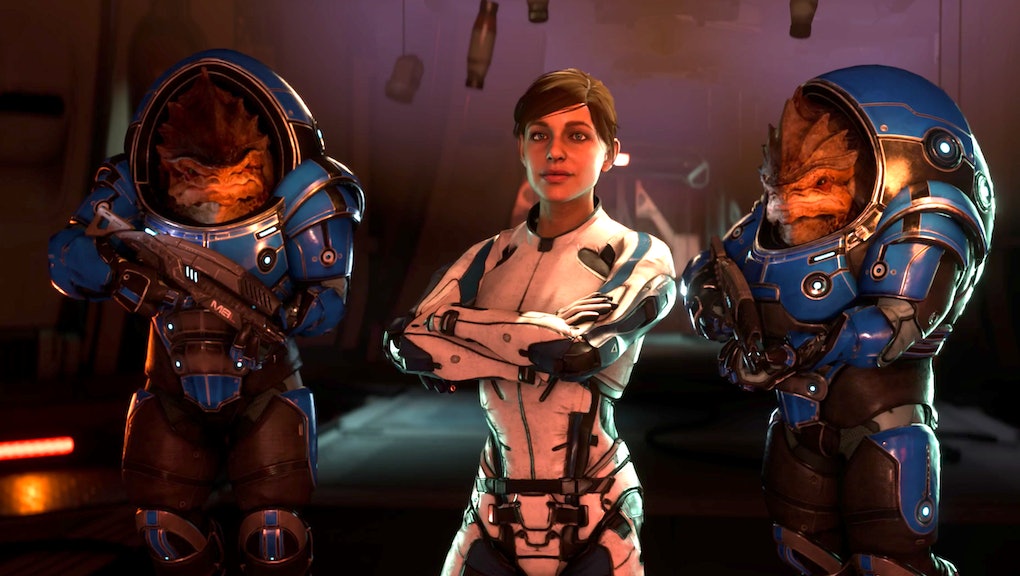 'Mass Effect: Andromeda' gameplay trailer: 16 details you might have missed

A full five minutes of gameplay for the upcoming sci-fi RPG Mass Effect: Andromeda was shown Thursday at the Game Awards, and it looks like it's shaping up to be pretty incredible.

Five minutes doesn't sound like a lot of time, but the gameplay footage reveals a ton of new information about Mass Effect: Andromeda that you might have missed if you weren't paying attention, including information about Ryder's teammates, new combat abilities, weapons and more. Let's break it down.

If you haven't even seen the trailer yet, what are you doing? Watch it right here:

OK, are you caught up now? Let's go over the nitty-gritty.

1. In the gameplay trailer, we got lots of hints at who Ryder's other squadmates are besides the previously revealed Liam and Peebee. At one point in the trailer, Ryder exits the Tempest with two other characters, a male krogan and a female turian. Following the trailer's reveal, a producer on Mass Effect: Andromeda confirmed their names are Drack and Vetra, respectively.

2. Just after we see Drack and Vetra, you can hear Ryder ask an off-screen character named "Sam" for intel about a character she's pursuing. Based on the robotic sound of its voice, Sam seems like the equivalent of the AI teammate EDI from the original Mass Effect trilogy — so maybe it's actually "SAM"?

3. During the sequence where Ryder is scanning a crime scene for evidence, you can hear her talking to someone named Reyez over her comms device. Though it's possible this person might just be a temporary ally for the sake of that particular mission, Reyez could be another permanent member of Ryder's squad.

4. Though it was previously confirmed that mid-conversation interruptions would be making a return in Mass Effect: Andromeda, the gameplay trailer gave us our first look. In the GIF below, you can see an option called "disarm" pop up in the lower-right corner of the screen, at which point Ryder disarms the guard.

5. Similarly, the gameplay reveal gave us our first look at what Mass Effect: Andromeda's conversation wheel looks like. Like BioWare's last game, Dragon Age: Inquisition, the conversation options have small graphical icons that correspond to what type of response it is, but there are no paragon/renegade values attached.

6. Towards the middle of the trailer, we get a nice big chunk of combat, including the return of the biotic charge ability. Soak it in. It's beautiful.

7. Some sort of biotic shield is shown as a new ability in this trailer. This looks like it will make combat more dynamic, rather than forcing players to constantly hunker down behind cover.

8. Along the same lines, it looks like Ryder has way more mobility options than Shepard did in the original trilogy. In the trailer, you can see Ryder using a jetpack to dash from side to side, hop in the air, and leap backward out of danger.

9. Like the biotic shield ability, it seems Ryder will have a tech-focused ability that will also provide some cover in the heat of battle.

10. Check out the upper-right corner of the screen in the GIF above. If you can't read it, it says that Ryder is currently in the middle of Vetra's loyalty mission. Loyalty missions were often the original trilogy's most compelling storyline beats, so it's great to see those making a return in Andromeda.

11. This next GIF not only seems to show a new turret ability Ryder can use, but it also shows how Ryder can combine abilities. Check out how Ryder uses the biotic pull ability to yank an enemy into the turret's line of fire. Rad.

12. At the very end of the trailer, Ryder seems to use several different types of melee weapons. In the original trilogy, Shepard could use the omni-tool for a heavy melee attack, but the GIF embedded below seems to either show a weapon made of biotic energy or some kind of energized baton-like weapon.

13. Shortly thereafter, the trailer seems to show Ryder wielding some kind of hammer weapon that she uses to smash through an enemy's energy barrier.

14. The trailer shows Ryder using several types of ranged weapons, but the coolest one looks similar to the arc projector from the original series, except that it shoots out a sustained beam of lightning rather than short bursts.

15. When Ryder is using her scanner to analyze a crime scene, a small pop-up window appears that shows a breakdown of the sources of blood on the ground. One is labeled Krogan and the other is labeled Angaran, a previously unheard of species in the Mass Effect universe

16. Just before Ryder gets to the crime scene, you can see her walking through a populated city-like area. She walks past a pair of aliens that seem to be a brand-new race. Could they be Angaran?

If you want to catch up on even more video game news, check out the latest from Mic, including information on the new Star Wars: Battlefront expansion, a review roundup of Super Mario Maker for the 3DS, information about season 3 of competitive Overwatch, and a quick collection of tips and tricks for Final Fantasy 15.