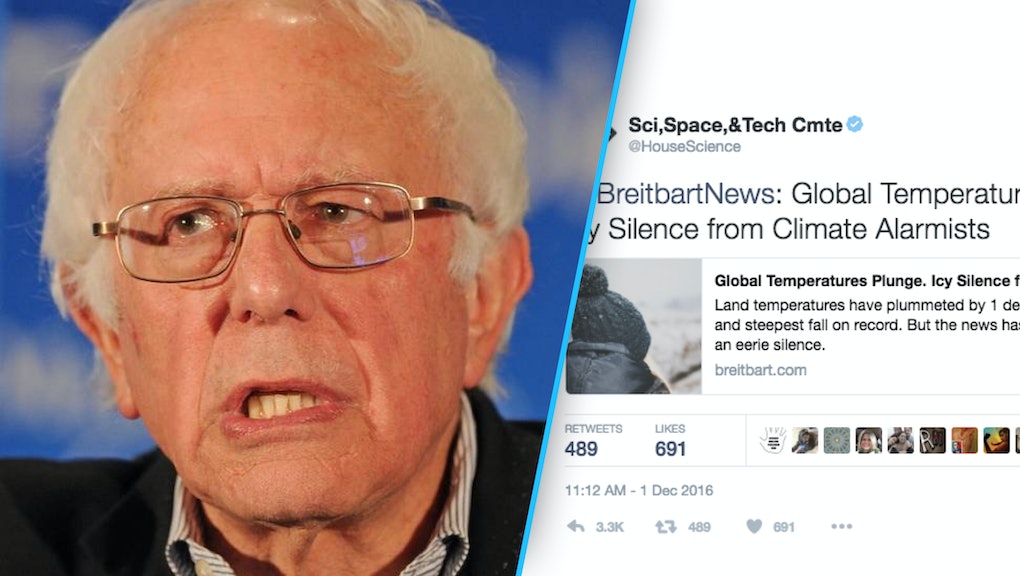 Bernie Sanders' climate change clapback was funny, but the actual science is terrifying

On Wednesday, conservative news site Breitbart tweeted out a link to a climate change-denying article that immediately drew sharp rebukes from the scientific community.

"Global Temperatures Plunge. Icy Silence from Climate Alarmists," the article's headline asserted before proceeding to argue that El Niño weather patterns are a more plausible explanation for the record-breaking warmth of the past three years than manmade emissions, and that global warming paranoia may be in "its final death rattle."

The theory was immediately debunked by Snopes, which referred to the piece as "little more than a regurgitation of a misleading article from the Daily Mail."

But for the House Committee on Science, Space and Technology, falsifiable science seemingly proved no obstacle to retweeting the article. The House Committee's endorsement prompted an outraged response from Sen. Bernie Sanders, who snarked back at the verified Twitter account, "Where'd you get your PhD? Trump University?"

But in the case of the House Committee on Science, Space and Technology — which controls of all of the United States' research on energy, the environment, marine life, aviation and astronautics — support for unfounded science is a slightly more terrifying prospect.

While Sanders' roast of the committee's Breitbart retweet garnered yucks on Twitter, the very real implications of the endorsement for the agencies that the committee oversees — which includes, as Business Insider noted: NASA, the Environmental Protection Agency (EPA), the Department of Energy, the National Oceanic and Atmospheric Administration and other federal research programs — aren't so funny.

Ahead of his January 2017 inauguration, Trump has already threatened to scrap NASA's climate change research division, calling its work "politicized science." He's appointed Myron Ebell — an opponent of reduced greenhouse gas emissions — to head his EPA transition team. And he's vowed to withdraw U.S. support from the landmark Paris climate agreement, with could threaten global participation among the nations that signed the agreement.

Trump's stance on climate is bad news for scientists and activists who fear that, with mankind's current rate of carbon dioxide emissions, Earth will soon face the combined threats of food and water scarcity, mass extinctions and an unprecedented refugee crisis as humans are driven from their countries by a host of climate-related infrastructural issues.

In the shadow of a presidential administration that has made plain its intentions to defund climate research and deny the existence of global warming, the committee's flippant disregard for what constitutes fact vs. fiction serves as an ominous harbinger of what's to come.