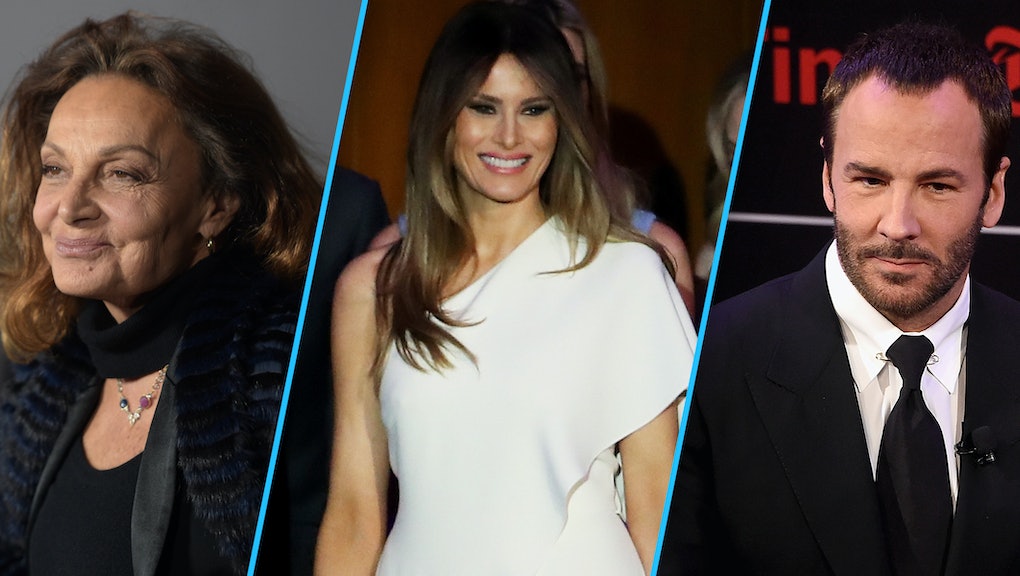 Less than one week after the election night results rolled in, designer Sophie Theallet made waves when she took a stand against dressing the first lady.

"As one who celebrates and strives for diversity, individual freedom and respect for all lifestyles, I will not participate in dressing or associating in any way with the next first lady," she wrote in a letter, which she posted to Twitter. "The rhetoric of racism, sexism and xenophobia unleashed by her husband's presidential campaign are incompatible with the shared values we live by."

Theallet had dressed Michelle Obama before, because, as she wrote, "her values, actions and grace have always resonated deeply within me," but the same could not be said for Trump.

And so, just like that, the avalanche of designer statements began, with designers coming out  — one by one — with statements on whether they would dress Trump, or offer her designs.

It's a situation our current first lady, Michelle Obama, never really found herself in. From the beginning, designers were biting at the bit to design anything and everything for her. But with Trump, it's a different story.

(Mic will update this list as more designers speak out.)

These are the designers who have spoken out in favor of dressing Trump:

"I think that in two or three months they'll reach out, because it's fashion," Carolina Herrera, who has dressed Michelle Obama on numerous occasions, told Business of Fashion. "You'll see everyone dressing Melania. She's representing the United States."

"It would be hypocritical to say no to dressing a Trump," Rag & Bone's Marcus Wainwright told the New York Times. "If we say we are about inclusivity and making American manufacturing great again, then we have to put that before personal political beliefs."

"Out of respect for the position of the first lady of our United States, I would be honored to be considered to design for any first lady of the United States," Thom Browne, whose designs were worn by Michelle Obama to the 2013 Inauguration, told Women's Wear Daily.

"I think Melania is a very beautiful woman and I think any designer should be proud to dress her," Tommy Hilfiger told Women's Wear Daily. "Ivanka is equally as beautiful and smart, although she wears her own clothes. I don't think people should become political about it. Everyone was very happy to dress Michelle [Obama] as well. I think they look great in the clothes. You're not gonna get much more beautiful than Ivanka or Melania."

"Donald Trump was elected and he will be our president," Diane Von Furstenberg, whose designs have been worn by Michelle Obama, told Women's Wear Daily. "Melania deserves the respect of any first lady before her. Our role as part of the fashion industry is to promote beauty, inclusiveness, diversity. We should each be the best we can be and influence by our example."

"Of course I would," Calvin Klein, who Michelle Obama has worn before, said when a TMZ photographer approached him about dressing Trump.

These are the designers who really haven't made up their minds

"That's none of my business," Michael Kors, who's outfitted both Melania Trump and Michelle Obama, told the Cut.

"I think my response is, I'll let you know," Christian Siriano, who has dressed Michelle Obama, told Access Hollywood. "I think I need to see how it goes. That's my diplomatic answer."

"I don't know. I'm conflicted about it," Rebecca Minkoff, who has worked with Michelle Obama on fashion-related initiatives before, told the Cut. "I have yet to dress a president, so I don't have hopes that I will. But to me, to each their own. We had already designed a whole range of safety-pin items, prior to them becoming symbolic, and so then we made an announcement that we are donating 100 percent of the proceeds to the ACLU."

"I'm not a politician, I'm a fashion designer — but I do have a point of view and I do have loyalty," Naeem Khan, who has become one of Michelle Obama's favorite designers, told Elle. "I really care for the values of our country and I feel like there's something missing in the new administration. I am very skeptical and I'm afraid of where it's going. But, I think we have to see."

"I tend to like to support women that I personally support — even when it comes to actresses or musicians," Tanya Taylor, who designed a T-shirt for Hillary Clinton's campaign and has dressed Obama before, told Elle. "I think there needs to be a reason why you are dressing them outside of their title. That's really why Michelle Obama was really exciting, so I think that I want to give it some time. I feel like they're not in office yet, maybe ... she will do something that is really meaningful and then you can reevaluate it. I think right now it's a little bit too soon to call."

"In the midst of this heated debate, the question actually seems somewhat irrelevant," Cynthia Rowley told Women's Wear Daily. "She can simply purchase whatever she wants, so how can we control it? Just because she's shown wearing a designer does not mean that designer is endorsing her, her husband or any of their beliefs. ... Some people say fashion and politics should never mix, but when given the choice, I think you should address and dress your conscience."

"We have not been contacted by the Trump campaign or administration thus far," Vera Wang, who famously dressed Obama for a state dinner in 2015, told WWD. "But the first lady-elect should support American fashion, as did her predecessors."

"I don't want to not dress people I disagree with," Joseph Altuzarra, a MObama favorite, told the New York Times.

These are the ones who are NOT OK with dressing Trump:

"I was asked to dress her quite a few years ago and I declined. She's not necessarily my image," Tom Ford, whose design Michelle Obama wore when she visited Buckingham Palace in 2011, said on the View. "And, you know, the first lady — other than the fact that I'm a Democrat and voted for Hillary and I'm very sad and disappointed that she's not in office — but other than that, even had Hillary won, she shouldn't be wearing my clothes. They're too expensive. And I don't mean that in a bad way. They're not artificially expensive. It's how much it costs to make these things."

"I have no interest whatsoever in dressing Melania Trump," Marc Jacobs, whose designers Obama has worn too, told Women's Wear Daily. "I didn't see [Sophie Theallet's] letter. Personally, I'd rather put my energy into helping out those who will be hurt by [Donald] Trump and his supporters."

"No one should [dress Trump] and if she buys your clothes, tell people you don't support it," Kenzo's Humberto Leon, whose designs Obama has worn before, wrote on Facebook. "You know who you are!"

"As one who celebrates and strives for diversity, individual freedom, and respect for all lifestyles," Sophie Theallet, who has happily dressed Obama, wrote in a letter posted on Twitter. "I will not participate in dressing or associate myself in any way with the next first lady. The rhetoric of racism, sexism and xenophobia unleashed by her husband's presidential campaign are incompatible with the shared values we live by."

"The result has only confirmed my belief that we must stand for what we represent as a brand, so my sentiment is still the same," Phillip Lim, whose designs Obama has worn before, told Women's Wear Daily. "As a global brand, we are always looking to partner with individuals that we have authentic relationships with — ultimately, women and men that share similar set of values, desires and ideologies: inclusion, diversity, justice, consciousness, innovation ... With that said, we do not have a current relationship with Mrs. Trump and I don't foresee a relationship developing under the Trump administration."

"While I have incredible respect for our country's political institutions, I find it challenging to be personally involved in dressing the new first lady," Derek Lam, whose designs Obama had previously worn in China, told Women's Wear Daily. "I would rather concentrate my energies on efforts towards a more just, honorable and a mutually respectful world. I don't know Melania Trump personally, so I don't wish my comments to seem I am prejudging her personal values, but I really don't see myself getting involved with the Trump presidency."