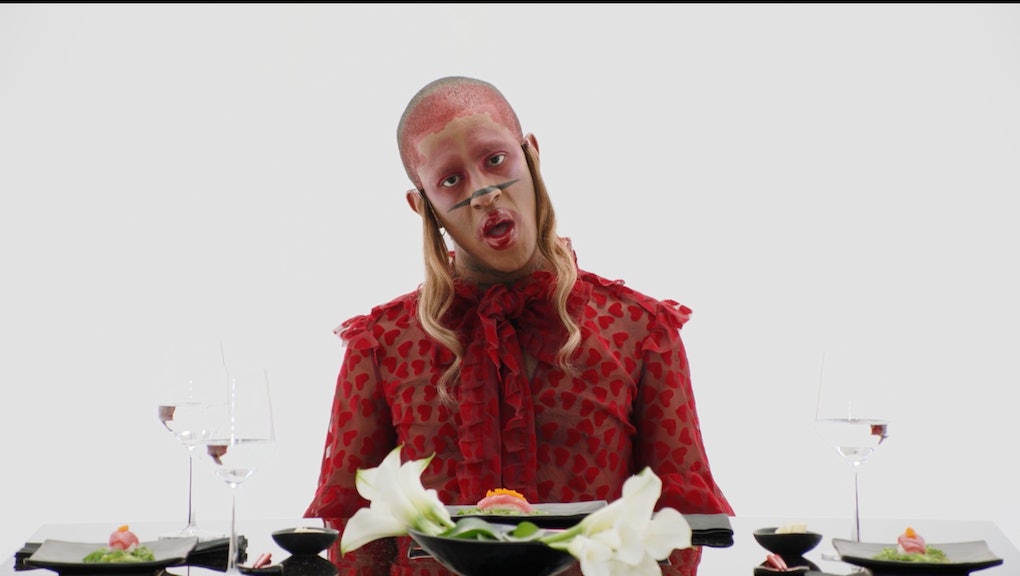 Rapper Mykki Blanco took to Twitter Friday afternoon to announce that his high-fashion video for "Loner" had been removed from YouTube for failing to meet the site's "community guidelines."

According to Blanco, someone left a comment on the video saying that a male scrotum appears in the video, despite the body part in question being, as Blanco puts it, a "male human knee."

Initially, before confirming with his management, Blanco could only guess the reason his video was banned was because of a comment thread under the video that mistakenly assumed a body part in the video was a scrotum.

The video, which made its way back onto Youtube after about an hour, shows that the shot in question is not a scrotum, but in fact bare legs and a bulge — both common visuals on YouTube. Neither the legs nor the bulge violates YouTube's nudity and sexual content rulings, which list artistic purposes amongst the several allowances made for nudity.

"It is exhausting that as a queer artist not only do I experience homophobia in the entertainment industry but also censorship for the unapologetically queer imagery I promote," Blanco said in a statement to Mic.

Blanco shared a snap of the screenshot his manager sent him, which included a notification from YouTube stating that the video violates community guidelines.

"I don't want homophobia to be a part of my narrative but when things such as a double standard censorship of my work happen once again it rears its ugly head," Blanco continued. "YouTube allows for the cis male gaze to demean women in provocative, hyper sexualized imagery, yet bans my music video for the appearance of a few seconds of a man's 'bulge' underneath a skirt."

He added, "Topless women with bare buttocks is acceptable, suggestive queer imagery is banned. What else is there to articulate? This is obvious let's not overthink this."

When the video returned to YouTube, the site had added a "content warning" before the video that requires users to confirm their age before viewing.

"We now wonder why this is necessary," David Swartz of !K7 Music, management for Mykki Blanco, said in an email. "Countless videos across the YouTube platform featuring overtly and blatantly sexual imagery (and actual nudity) are available with no requirement for age verification, so why is that so for this video by Mykki? Why does YouTube want to restrict access to this video? Why does YouTube see this video as any different than all those which have completely open access to users of all ages?"