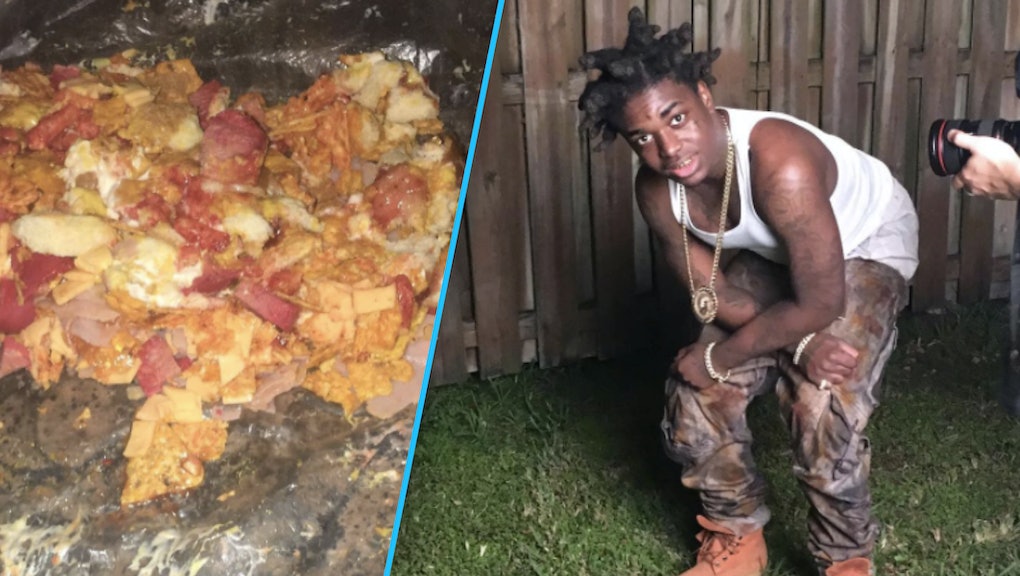 Even as a free man, Kodak Black is still eating food fit for prison.

The 19-year-old hip-hop artist from Florida, whose real name is Dieuson Octave, was released from jail on December 1, Fader reported. On Sunday, he joked about forgetting how to boil eggs on Twitter and also posted a homemade creation on Instagram, which resembled a kind of "prison food" inmates often hack together from packaged snacks which are often accessible to them.

People on Twitter roasted Octave for the grody grub, saying he should cook real food now that he isn't in jail.

Other commenters noted the food was "spread," a meal made by inmates in prison that consists chips, canned meat or other foods added to ramen noodles, according to Urban Dictionary.

The fact that prison food is awful is nothing new. Inmates are often lucky to get any semblance of a vegetable during their time in jail. Albert "Prodigy" Johnson, member of the hip-hop duo Mobb Deep, said the only vegetable he got in jail was green beans, Mic previously reported. Johnson, who authored a cookbook on how to cook in prison, said it was incredibly difficult to stay healthy.

In some prisons, food costs as low as 58 cents per meal, according to the Marshall Project, a nonprofit dedicated to reporting about the American criminal justice system. Prisoners at certain institutions have been reported to lick maple syrup packets or eat toothpaste to consume calories.

To see Octave, a successful musician who's estimated net worth is $300,000, resort to unappetizing food mashups even when he's a free man reveals just how damaging, and long lasting, the effects of prison food can be.

"One of the easiest things to do after you've been in prison for so many years is to head straight for the ice cream and soda." - Joe Calderon, community health worker

Octave was incarcerated for just 120 days, but other inmates who serve decades-long sentences might be even more puzzled about how to feed themselves upon their release.

When people lose basic life skills like cooking meals, they also lose the freedom to make healthy food choices when they are ultimately released from jail. Health is one of the six basic life needs (others include livelihood, residence, family, criminal justice compliance and social connections) necessary for former inmates to have successful reentry into society, the Huffington Post reported.

"One of the easiest things to do after you've been in prison for so many years is to head straight for the ice cream and soda," Joe Calderon, a community heath worker who invited the San Francisco-Marin Food Bank to nutrition classes at the Transitions Health Clinic, told the San Francisco-Marin Food Bank blog. Calderon helped organize a three-week nutrition class which teaches inmates how to tweak simple recipes for sweet potato hash, fruit smoothies and hummus.

How can prisons better help inmates healthfully prepare for the outside world?

Several organizations in the United States are working to arm current and former prisoners with cooking know-how. Recipe for Change, a cooking program run out of Cook County Jail in Illinois, teaches inmates how to make pizza, pastas and other dishes so they can land restaurant jobs when they get out of prison. Project Renewal, a nonprofit dedicated to ending homelessness, has a culinary training program that helps train homeless people (some former inmates) to enter the food industry, Mic previously reported.

Teaching incarcerated people cooking skills goes beyond job readiness and health, though. "By teaching people who historically have been ignored how to take care of themselves — how to eat and how to reintegrate into society — it helps them understand their self-worth," Calderon said.