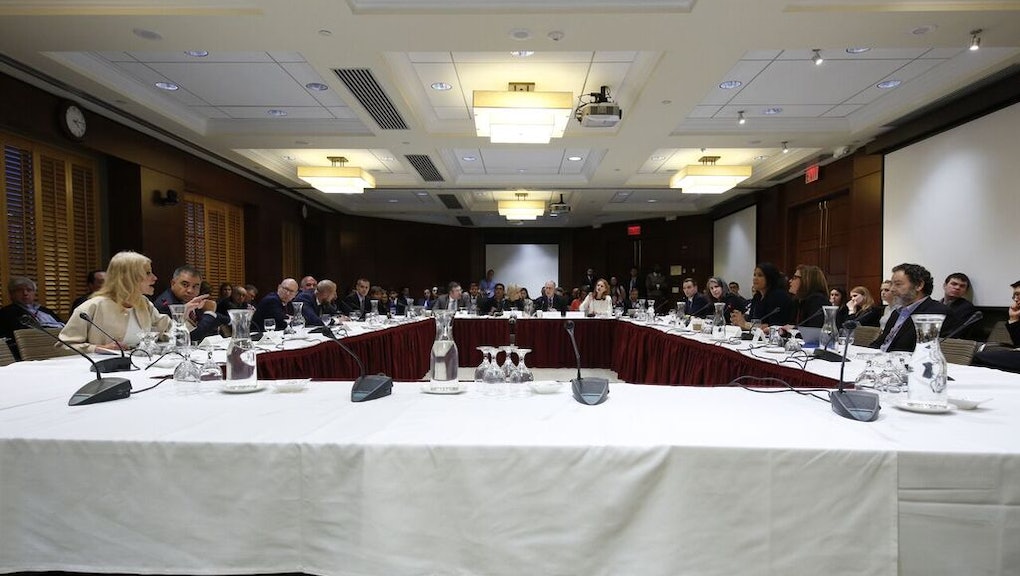 CAMBRIDGE, Mass. — Thursday's meeting of top campaign officials at Harvard University's Institute of Politics made headlines for the bitter confrontation between members of the Trump and Clinton campaigns. But the conference at which the meeting took place also produced many behind-the-scenes insights from those who were on the front lines of the battle for the White House.

The conference spanned two days and included seven panel discussions. A post-election tradition dating to 1972, the gathering is meant to define the first draft of history of the campaign. Nicco Mele of Harvard opened the conference by imploring the group of reporters and staff present to "try and stay off Twitter for 28 hours."

Campaign managers for nearly all the 17 Republican candidates and their three Democratic counterparts opened the event with a roundtable Wednesday evening, detailing their experiences during the primary contest in front of reporters, Harvard faculty and students. A panel of media executives later that evening gave campaign staffers the chance to vent about the role of the fourth estate, particularly how cable news covered the Republican primary.

Thursday's sessions included three panels on the Democratic primaries, the Republican race and the general election, which devolved into the shouting match between the Trump and Clinton camps. A forum with Clinton campaign manager Robby Mook and Trump campaign manager Kellyanne Conway, moderated by CNN's Jake Tapper, closed out the event.

With the exception of the forum, the proceedings were not filmed, and reporters agreed to delay publishing details of the events until the conference had ended. This dynamic meant that the campaign officials were largely forthcoming about the challenges they faced throughout the race. Many participants were eager to correct the record and provide their version of events, particularly the Trump delegation.

Below are a few of the more interesting revelations that emerged over the course of the conference, from both sides of the aisle. (You can listen to audio recordings of the conversations here.)

Clinton communications director Jennifer Palmieri said that she regretted not pushing for a fourth debate in the closing weeks of the election.

"If there's one thing that I would change, that I could go back and do, is I would go back and have pushed for a fourth debate in like the last 10 days," Palmieri said, noting that the debates gave Clinton the opportunity to break through in a way that "we could never replicate ... when the two of them were in their separate silos."

"We were just kind of dead in the water, not getting traction on anything."

She revealed that she had discussed the idea of a fourth debate with campaign manager Robby Mook on the same day that FBI Director James Comey's letter to Congress threw the campaign into a spiral just 10 days before the election.

"Robby and I had a conversation on the plane on Friday morning about should we push for a fourth debate, because we were just kind of dead in the water, not getting traction on anything," Palmieri said. "And then, Kristen Welker [of MSNBC] said, 'Have you seen this story that just posted about the FBI reopening the investigation of the emails?' And our wireless didn't work for an hour, like the lights going off. And then we got overtaken by those events. I think that would have made a difference."

Asked by moderator Andrea Mitchell of NBC News whether the Trump campaign would have agreed to another debate, Conway replied, "Yes." Deputy campaign manager David Bossie agreed, saying, "Absolutely, I think so. You guys felt, I guess, that you did well in the debates. We [felt] the same."

Bernie Sanders' own campaign was shocked by his success

"This was something at the beginning that we had no way of anticipating."

"Our early estimates [were] that we were going to raise between $30 and $50 million total," Weaver said. "What came as a complete surprise in this campaign and really allowed this campaign to go toe-to-toe was that we ended up raising over $230 million, primarily from small donors online."

Weaver said Sanders' army of small-dollar donors allowed the campaign to avoid spending time doing more traditional fundraising events. He said their fundraising was done "by hitting a button that asked people to send money," which they did in droves.

"You'll all remember the bird, the little bird that landed on Bernie's podium," Weaver recounted, referring to one of the more meme-able moments of the campaign. "We offered a Bernie sticker that had the bird on it, 'Birdie,' for any contribution. We raised over $3 million."

"People were extremely generous to the campaign," he said. "And this was something at the beginning that we had no way of anticipating."

Sen. Ted Cruz apparently didn't mean to toss a grenade on the floor of the Republican National Convention

Cruz campaign manager Jeff Roe said that the Texas senator didn't intend to infuriate delegates at the July convention in Cleveland. He claimed that Cruz did not anticipate the chorus of boos that followed when Cruz pointedly declined to endorse Trump and urged Republicans to "vote their conscience."

"It was not intended to be the 'blow-up-the-ship'  [moment] like it came across."

"I actually don't think he understood the 'conscience,' the loaded word that that was," Roe said. "Of course, if you're a candidate who's gotten millions of votes and won hundreds of delegates and blah blah blah, then you think that you're speaking for them to a certain degree. And he was trying to provide a path for the party, provide a path for Trump to unify the party behind a set of core principles. It was not to blow the convention up. That was a surprise to him."

The bitter feud between Cruz and Trump was a defining aspect of the Republican primary campaign, with Trump attacking Cruz on highly personal terms, including remarks about his wife and insinuations his father had been involved in the assassination of John F. Kennedy. His call for voters to "vote their conscience" was widely considered to be a continuation of that rivalry.

"We understood that he could get booed, but ... it was not intended to be the 'blow-up-the-ship' [moment] like it came across," Roe said. "He didn't get to the punchline until 22 minutes and 58 seconds in, and everybody's pissed off at a 23-minute speech unless you're the nominee."

Trump absolutely swamped his rivals in the media during the primary

The media coverage of Trump was a constant gripe at the conference, with Republican primary campaign staffers livid about the airtime Trump was given over the course of the race.

Terry Sullivan, campaign manager for Sen. Marco Rubio, said media coverage made "the fundamental difference, at least from a primary perspective, of this election." He said the Rubio campaign had tracked media impressions, and found Trump dominated the conversation to a remarkable degree.

"When Donald Trump put out a tweet, Fox News would cover it live."

Earlier in the session, Trump's former campaign manager Corey Lewandowski highlighted this as an advantage the Trump operation enjoyed from the beginning.

"Our goal was to make sure that we were going to run as the populist," Lewandowski said. "To run on our wealth and not run from it. To monopolize the media attention by using social media unlike anybody else. And what we know is that when Donald Trump put out a tweet, Fox News would cover it live. 'Donald Trump has just tweeted from his pajamas that X.'"

Trump, of course, continues to tweet from his pajamas.