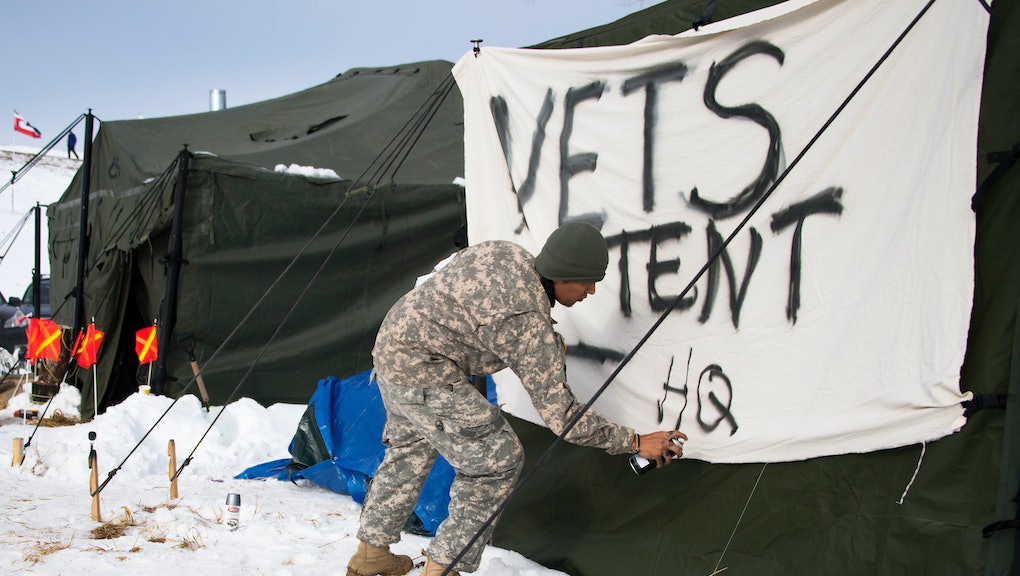 At Standing Rock, the veterans have arrived

CANNON BALL, ND — Only a few hundred yards from the police barricades that surround the borders of Oceti Sakowin Camp, cars lined up as far as the eye could see to bring able bodies and much needed supplies into camp Saturday night. The veterans, who have pledged to stand with Standing Rock as "human shields," had arrived.

By sundown, organizers at the veteran encampments estimated that approximately 500 veterans showed up at the camp. By the end of the weekend, over 2,000 veterans are expected to arrive to stand with the water protectors at the front lines against the police and the Dakota Access Pipeline company.

Veterans showed up hauling supplies and dragging trailers of much-needed wood, fuel for the fires and wood stoves around camp.

"Veterans like us are like a Swiss Army Knife," U.S. Army veteran Adric Potter said in an interview. "Any one of us can cover down on anything, and the majority of us at least have medical training."

Besides just standing with the indigenous water protectors during protest actions, the veterans are fanning through the camp to take on responsibilities. The Oceti Sakowin Camp is now a small city that runs on donations and volunteer labor, and as the harsh North Dakota winter sets in on the plains, the camp is busy winterizing structures, building floors, putting up longhouses and trying to keep the wood stoves burning.

Earlier in the week, a group of veterans took it upon themselves to head to the water at night to recover canoes seized by the police, victoriously dragging them back to camp behind cars.

"The people need help, and this is the spot to be in the struggle to save the damn planet," Eric Lobo, who came with Veterans For Peace, said in an interview.

This significant veteran force was organized through a GoFundMe campaign that raised over $1 million dollars to send veterans to stand "alongside peaceful water protectors, who've endured violent attacks from the private security funded by DAPL and more brutality and arrests at the hands of militarized police and DAPL security."

The indigenous leaders who organize the action at the front lines are adamant about keeping the protests peaceful. They want to dispel the notion, fueled by reports of "clashes" between protesters and police, that there is a violent confrontation. No weapons are allowed at camp, and nearly everyone sent to the front lines goes through hours of training held daily at a camp maintained by the Indigenous Peoples Protection Project.

In return, police have used concussion grenades, water hoses and tear gas on protesters. But the veterans say they've been through much worse, and are ready to stand between the Lakota Sioux people and whatever the police lob at them.